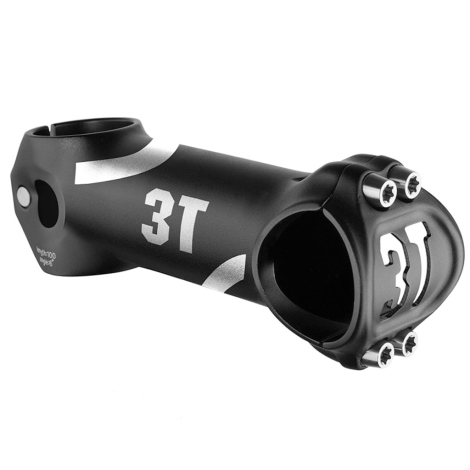 Arx II is an evolution of the well-liked Arx alloy stem, which has found a place on every sort of bicycle since its launch in 2007. It’s a subtle refresh of this classic design. The faceplate is drawn in tighter at top and bottom, for a more ovalized frontal appearance, while retaining the cutout 3T logo. The sides of the extension are slightly flattened for a more sculpted look by comparison with the tubular section of the first-generation Arx. A single M7 bolt clamps the stem to the fork steerer, in place of the twin M5 bolts used previously. Bolts are now the more-secure Torx-type fitment in place of the Allen bolts used previously.

Features:
Mr Fowler Matches my old 3T bars but not overly keen on the one steerer bolt design which feels like a weak point. Noted that this is an older design which new versions may address.
Fitdad Strong, light, solid and the 3T cutout looks cool.
Mr Hutchins Good looks and more importantly very stiff.
Mr Coughlan Reasonably light and strong. Graphics are a bit ordinary.
Mr Bisset Excellent product. Fits well, looks neat.
Mr Dobbs Great. Light, relatively stiff and at a good price. Not much more you can ask from a stem.