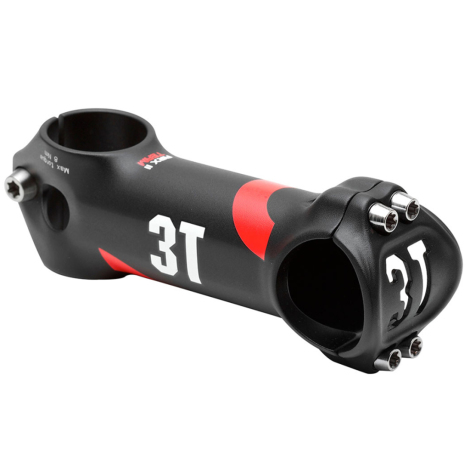 Arx II is an evolution of the well-liked Arx alloy stem, which has found a place on every sort of bicycle since its launch in 2007. It’s a subtle refresh of this classic design. The faceplate is drawn in tighter at top and bottom, for a more ovalized frontal appearance, while retaining the cutout 3T logo. The sides of the extension are slightly flattened for a more sculpted look by comparison with the tubular section of the first-generation Arx. A single M6 bolt clamps the stem to the fork steerer, in place of the twin M5 bolts used previously. Bolts are now the more-secure Torx-type fitment in place of the Allen bolts used previously.

Features:
View All 3T Products
Michael love the combination of rugged, chunky looks and very light weight. Like many others, not as taken with the bold colouring, however nailpolish remover took the red paint off in minutes - now it is stealth!
Mr Brandt Looks good and light for the price
Mr Ross Looks the part, does the job. Titanium torx bolts are a plus!
Rob Stone A nice stem. Attractive and strong.
PeteD The stem itself looks nice and is solidly built. What I don't like is the handlebar retaining bolts. The standard type of bolt is a hex bolt but 3T have now decided to use Torx bolts instead "as they are more secure than Allen bolts". So now we have to carry another tool because 3T has gone against the market trend. Cheers 3T.
Watson Decided to go for a -17 degree stem rather than completely slam a 6 degree stem on my Supersix Evo. This stem works perfectly for me mated to my 3T Superego handlebars
justin Brilliant. Light weight & does the job perfectly.