Trustpilot Free Delivery on UK orders over £20 Finance Available Easy returns Sign Up To Our Newsletter
Extra 10% off Selected Bikes the Week Save an extra at the checkout. 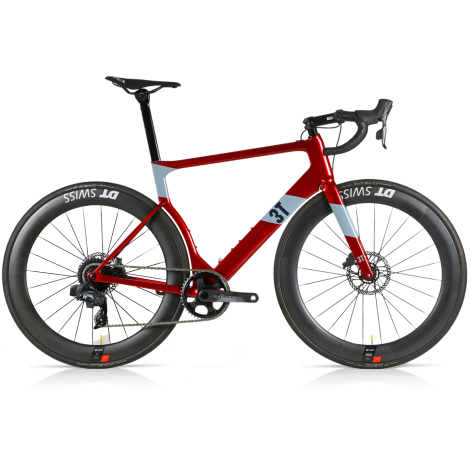 View options as list
Add To Basket Email Me
Multi-Buy Savings!
Code: 3T6130BDAY
3T Strada Team Fat Creations Force AXS Custom Road Bike
The 3T Strada is the road frameset everyone is talking about; and for good reason! For the Strada frameset 3T threw out the rule book, totally reinventing the aero road bike from scratch. But ‘Aero Road’ doesn't do it justice, as it's not just extremely aero but also considerably more comfortable than other aero road bikes on the market. How have 3T managed to engineer a road bike that can be both? The key elements are tyre size optimisation, a lightbulb moment designing new aero profiles and shapes and a totally new approach to the specification of the drivetrain.
Wide Tyre Optimisation
The biggest factor in road bike comfort are the tyres, providing more compliance than any other part of the bike. Wider tyres are better at reducing shocks from rough surfaces, cobbles and potholes as well as benefiting from lower rolling resistance. Traditionally wider tyres have heeded poor test results in the wind tunnel, however this has only been the case in instances where they are combined with frames and parts that were originally optimised for narrow tyres. The 3T Strada is the first aero road frame designed specifically around the properties of a wider 28mm tyre with geometry, angles and tube profiles all carefully designed and constructed to blend seamlessly around the profile of a wider tyre.
1 x Aero Drivetrain
In the evolution of aero road bike design the performance of the drivetrain has never really been addressed. 3T identified that the bottom bracket area of most aero road frames combined with the frame, crank, chainrings, front derailleur, water bottles and rider’s legs cause the most drag in wind tunnel tests. Speccing a single ring drivetrain eliminates the need for a front derailleur and an additional chainring, significantly reducing frontal area and creating more space for better airflow while freeing up the design of the Strada’s seat tube allowing the designers to further shield the year wheel within the frame. Careful specification of a single chainring and wide-ratio cassette will provide you with all the gears you need so you won’t be spinning out on the downhills or running out of gears on steep hills.
Airflow – The Technical Bit….
3T design for real world aerodynamics at realistic speeds; they call it ‘Realfast Arcfoil’. Conventionally aero tubes have been designed based on a series of flat 2d cross sections that connect together into a tube shape. But in the real world the air flowing over a tube doesn't follow a flat path, it follows an arc. The 3T Strada was built using arcfoil tubes, creating a series of curved cross sections which exactly mimic the arc of actual airflow, substantially lowering drag. The Airfoil sections of the seat tube arc for a different reason, perfectly covering the rear tyre to reduce turbulence. Seat post, head tube, seat post clamp and even the dropouts are optimised aerodynamically based on 3T’s real world analysis. The 3T Strada downtube is shaped to hide the water bottle from airflow with the fastest set-up being one bottle low on the downtube and the second-fastest set-up with two bottles.
Fundi Aero Fork
In their quest to make the ultimate aero road bike frame 3T didn’t stop at the main frame; the Fundi aero frok has an ultra-short-stack crown, which cleverly provides clearance for a 28mm road tyre while lowering the crown height to improve stiffness, moving the front wheel closer to the downtube and creating a perfect transition for airflow helping the front wheel and frame become collectively more aero. With disc brakes integrated into the design of the frame and fork 3T has specced flat mounts on the Fundi fork with the 140/160mm disc adaptor completely integrated into the fork leg shape.
Aeroflex Seatstays
Aero road bike frames are inherently stiff vertically and as 3T have identified wider tyres offer much more comfort than a frame ever can, however, 3T have still managed to eke out even more comfort and compliance with their extremely thin seatstays.
Disc Brake Only
3T didn't want to compromise weight, stiffness and aerodynamics by combining disc & rim brake versions in one frame platform, so everything on the Strada is fully optimised for flatmount disc brakes only.
Road.CC Review 4.5 / 5
“The new 3T Strada has blown me away. It's a truly stunning bike with breathtaking speed, impressive smoothness and fine handling balance. If this is the future, as some people have speculated, I'm sold. Take my money 3T.” Full review here
Frameset
Wheels
Drivetrain
Components
Geometry Information