Some piccies from the historic visitation of World Cup CX to the UK.

Photos courtesy of myself and Anna Cipullo.

An estimated 8,000 (yes eight thousand) spectators turned up to the third round of the 2014 UCI world cup cyclocross race in Milton Keynes.

This was not only the first time a world cup cyclocross race was held in Britain but also the first one to take place outside of mainland Europe and boy did the UK fans take to it.

I knew this was big when the motorway signs approaching Milton Keynes on the M1 told spectators which junction to take for the race. The whole organisation was excellent and impressively slick for a first time event. I was at the Koksijde round in Belgium the week before and this more than matched it for organisation, crowds and – most importantly – atmosphere. 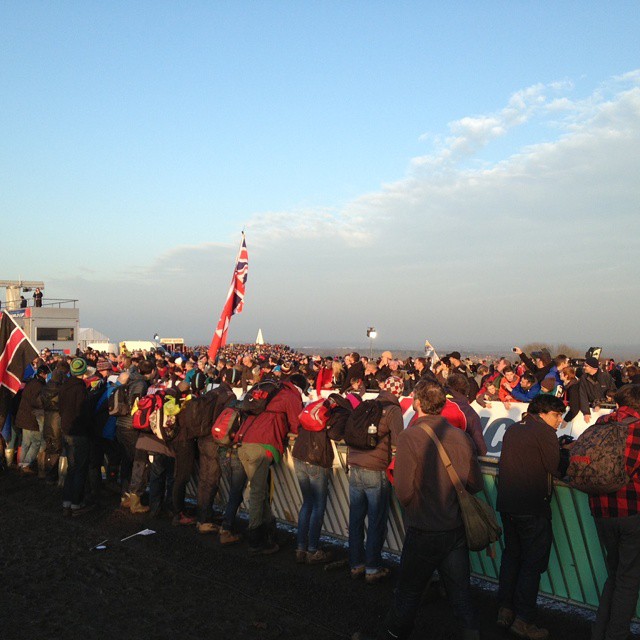 The start finish was actually one of the quietest parts of the course with many choosing to go infield where you could see the race several times from one area. 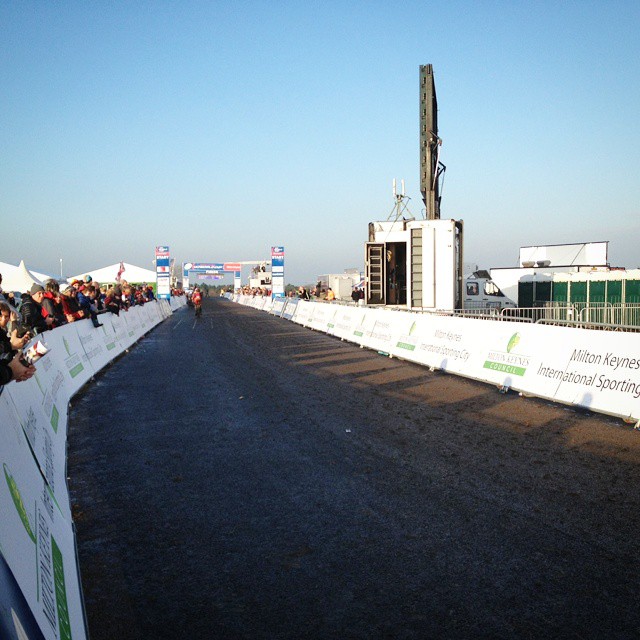 The start/finish straight was freshly laid tarmac straight on to a muddy right hander. We love the fact that it looks like you are dropping off the edge once you come to the end of the straight.

The event was a combination of cowbells, beer, flags, bobble hats and noise and you could see the riders were as impressed as the spectators with the whole thing. There were a few ardent European fans who had also made the trip but what was impressive was that the massive crowd was nearly all English and were very knowledgeable.

The fact that there was a national series round on Sunday on the same course meant many people stayed over making a weekend out of it. Apparently there were a lot of cowbells and bobble hats round Milton Keynes on Saturday night as many carried on the party theme well into the night.

The 2.6km course was a tough one and many riders commented that it would also make a good world championships course, how good would that be? It was a treacherous muddy course with plenty of off camber corners and running in the mud sections.

It was a real test of bike handling skills and made bike changes a necessity as the mud got deeper. It also made for great viewing as riders struggled to stay upright on the corners. USA rider Jeremy Powers delighted the crowd by continuously riding the Shimano steps to raucous cheering.

Nikki Harris delighted the home crowd with 3rd place in the women’s race while Ian Field rode to his best ever finish in 12th place in the men’s. But these two were only part of the story as the many UK riders competing were cheered every lap by everyone no matter what position they were in.

We really hope this becomes an annual fixture and have to congratulate the organisers for a fantastic day! 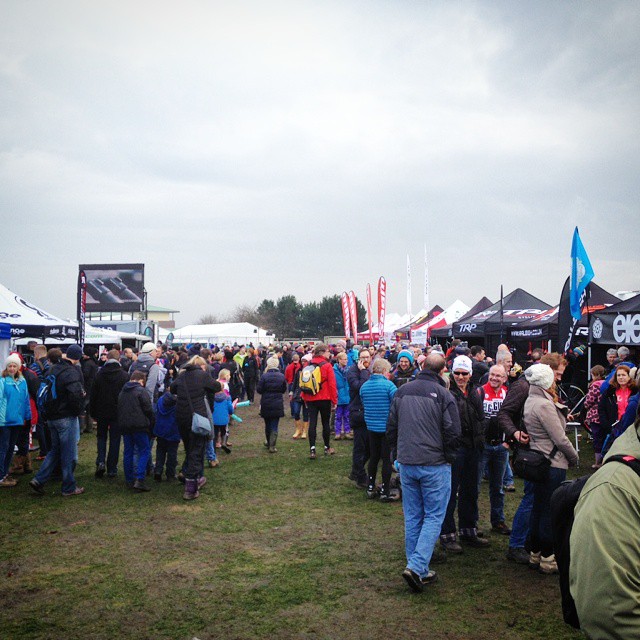 There were plenty of goodies on show and lots to buy in the expo area. The beer tents were also doing a roaring trade helping to keep the crowd in good spirits 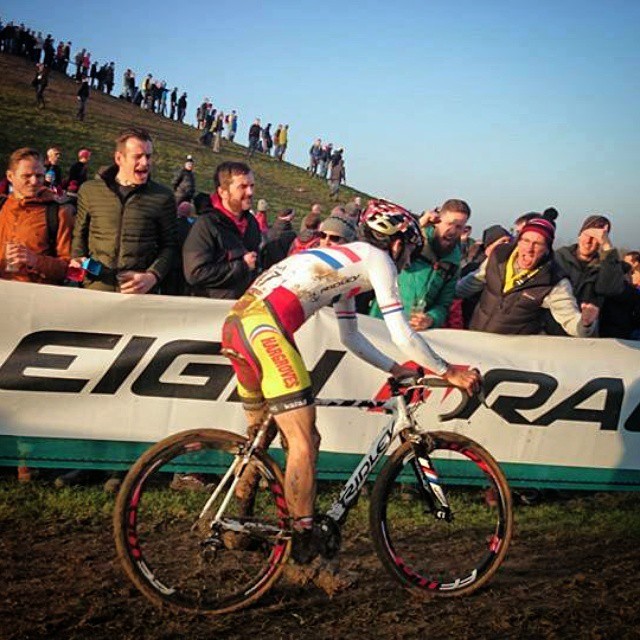 British national champion Ian Field had the ride of his life and finished 12th which is his best finish to date in a world cup round. We loved that he applauded the crowd crossing the line acknowledging their help and encouragement. A very emotional podium presentation also warmed him to the crowd. 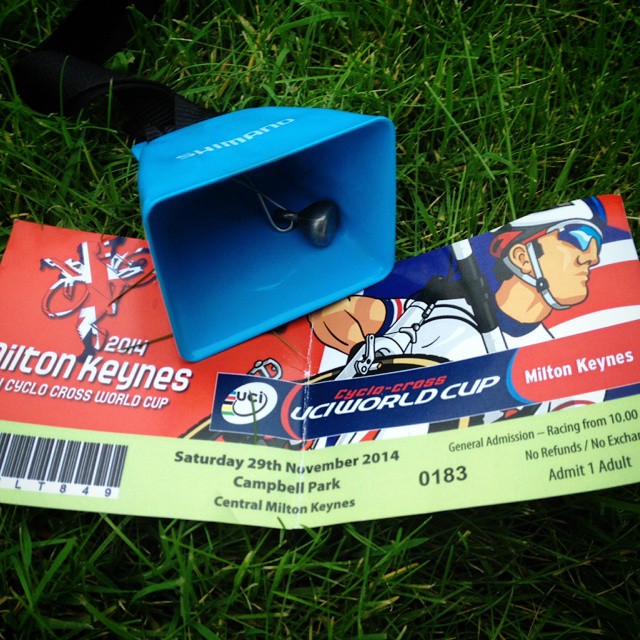 These are the only two things I came away from the course with and are now on the pin board wall as a reminder; think the bell will get used before next year though. 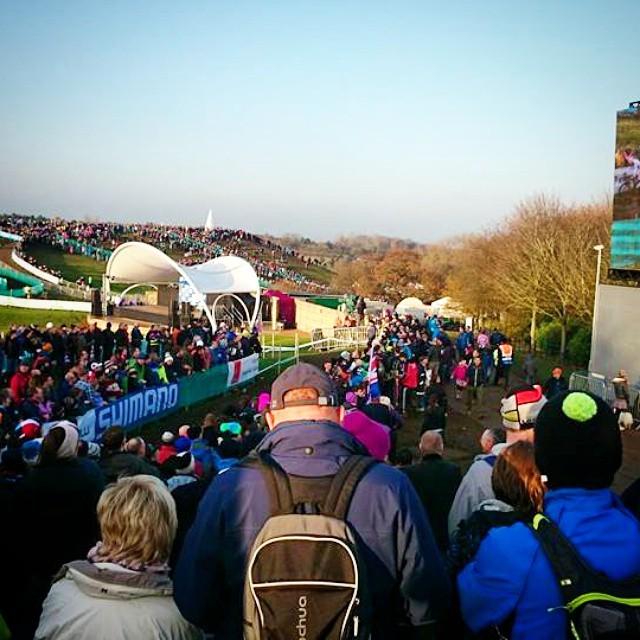 Several big screens at strategic positions kept the crowd up to date along with the two commentators who didn’t take a breath during either race. 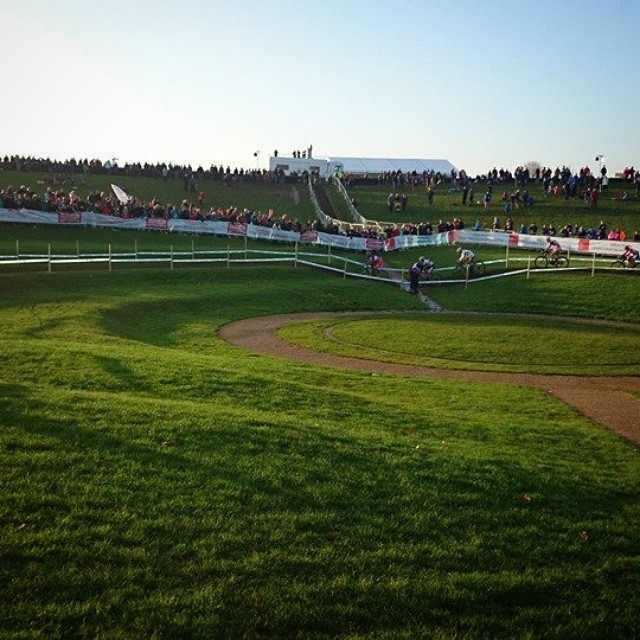 While this shot of the lower course may look sparse, the upper sections were rammed and looking up reminded us of the scenes on Buttertubs Pass in Yorkshire on this year’s Tour de France. 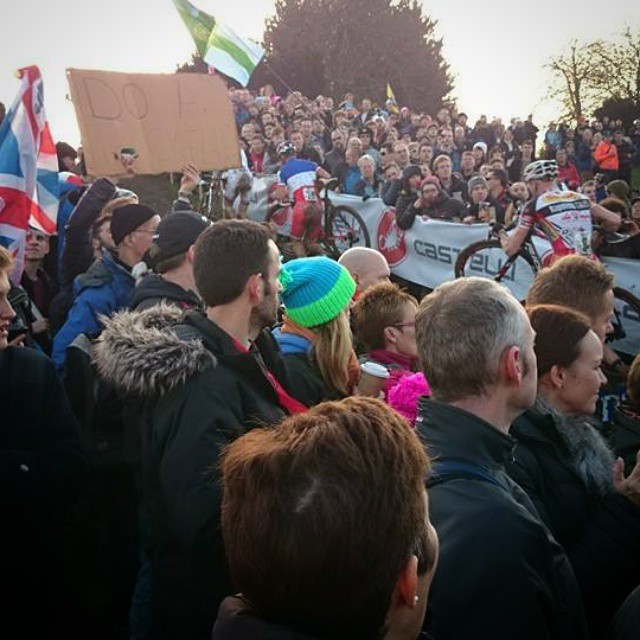 The Shimano steps were one of the most popular sections of the course and USA rider Jeremy Powers delighted the crowd by riding them while others ran up them. We don’t know which was faster but we know which was more impressive. 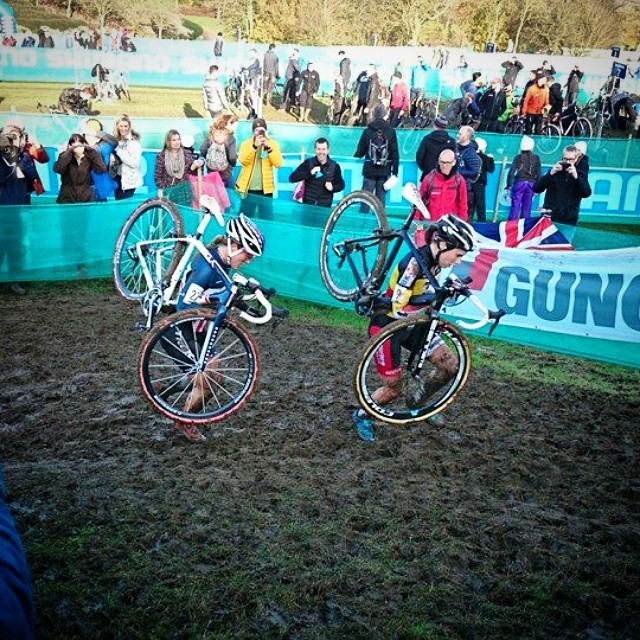 This shot sums up the women’s race as Sanne Cante (right) and Katie Compton were neck and neck the entire race right up to the finish line sprint with Cante taking the wine by the narrowest of margins.

Photos courtesy of myself and Anna Cipullo.