The 2015 Tour de France will start in the Netherlands on Saturday 4th July with a route very different from this year and looks to be one for the climbers.

A picture paints a thousand words so here’s the official map of the route. Our analysis follows… 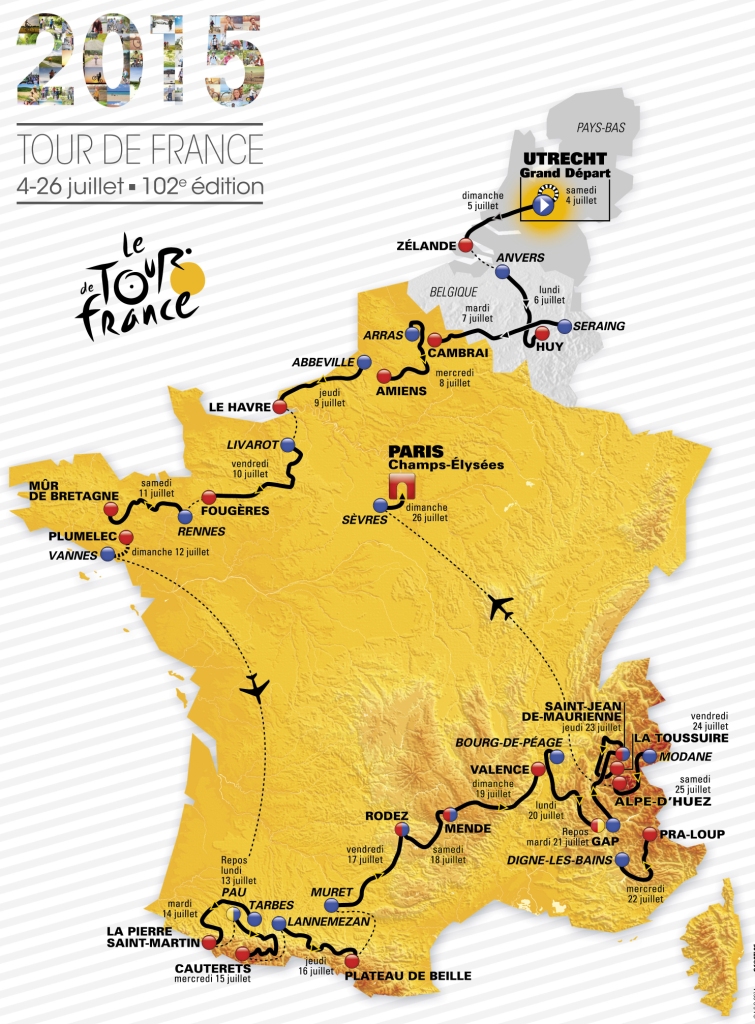 This stage includes seven sectors of cobbles and if it is anything like the 2014 version then it will be epic and could shape the outcome of the race.

GC contenders will want their team cars close to the front of the convoy, for a quicker response to any mechanicals, so expect to see them very active for a top placing on the previous day’s stage which finishes on the steep slope of the Mur de Huy.

The first real day in the mountains is not the longest or has the most metres of climbing but crucially comes after the first rest day in the Tour. This can play havoc as rider’s react differently to a day off and there are no easy roads in the Pyrenees so it’s hard to guess how this will go.

It’s also Bastille Day in France and a national holiday so the French riders will be more fired up than usual on this stage.

This is a short stage but expect to see lots of action as it’s the last chance for anyone to try and either seal their win or attack to win it. If any rider has been in the lead for a while then tiredness could be a factor while other riders may simply wait and put everything into this day.

Either way this is one not to be missed. Whoever is in yellow at the end of today’s stage will be the winner of the race as the next day is the sprinter’s stage in Paris and will not shape the overall.

No fewer than 11 stages are classed as ‘mountainous’ or ‘medium mountains’. And even two flat days also have an uphill finish. There’s very little time trialling (a short 13.7km individual time trial on day one and a 28km team time trial on day none) so you could say the course looks tailor made for the Columbian climber Nairo Quintana (Movistar).

The sprinters have at least five stages which should end in a bunch gallop and there are also a few stages for the Classics riders. Stage 3 will finish on the infamous short, steep slope of the Mur de Huy in Belgium.

Stage 4 will see the race tackle seven sections of cobbles on their first day back in France. This means all GC (General Classification ie overall position) contenders will have to be alert during the first week as the cobbles, steep finishes and cross winds could mean time loses very early on.

What will surely prove to be a pivotal stage looks to be the penultimate day to Alpe d’Huez. The stage is only 110km long but will be the last chance for anyone to gain back time before the usual final day sprinter’s stage on the Champs-Élysées.

GC riders and teams will be tired by this time so any weaknesses will be exploited and expect to see some last gasp attempts to win the Tour on this stage.