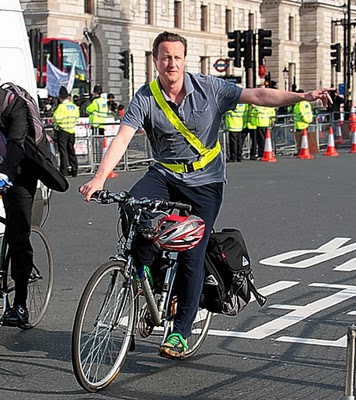 David Cameron has today unveiled plans for a £77m campaign of investment  in cycling in cities and national parks across England.

Mr Cameron said the campaign would include “a commitment from the government to cut red tape” and that councils would be expected to “up their game” to deliver the campaign on time and to budget.

The Prime Minister also said “Following our success in the Olympics, the Paralympics and the Tour de France, British cycling is riding high – now we want to see cycling soar. Our athletes have shown they are among the best in the world and we want to build on that, taking our cycling success beyond the arena and onto the roads, starting a cycling revolution which will remove the barriers for a new generation of cyclists.”

“This government wants to make it easier and safer for people who already cycle as well as encouraging far more people to take it up and business, local government, developers, road users and the transport sector all have a role to play in helping to achieve this.”

The government has confirmed that the total investment in cycling up to 2015 will be £148m. The long term aim is to increase the safety of cycling, helping it to become a more viable commuting method. One third of all journeys in the Netherlands are made by bike – in the UK that figure is currently just 2%! The campaign is targeting increasing that number and the investment, welcomed by the all-party parliamentary cycling group and cycling charity CTC, is certainly a step in the right direction.