The highest of high tech. The Kurve range takes existing favourites from Fizik’s catalogue and gives them a ‘techno flex’ makeover. Kurve saddles do away with the padding whilst simultaneously enhancing the comfort. 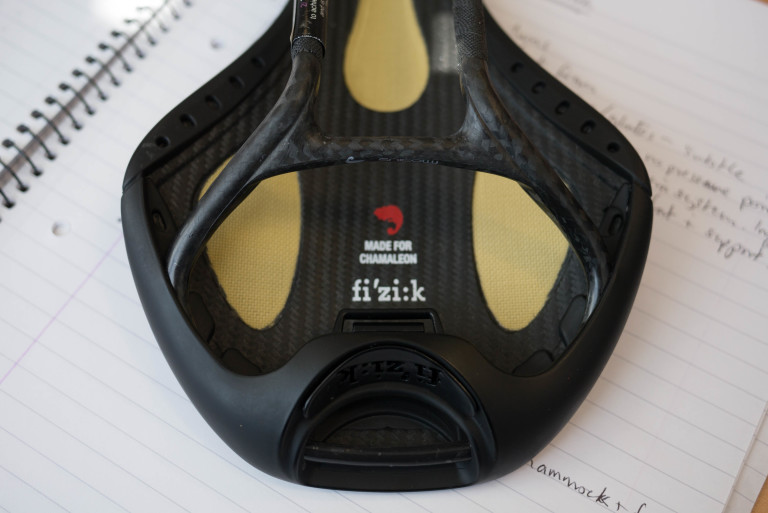 When Fizik launched their Kurve saddle range a couple of years ago it did confuse a few people. The saddles looked very similar to existing Fizik models (such as the Arione and the Aliante) but these new saddles were all named after animals. Snake, chameleon and bull. What’s all that about?

Well, arguably Fizik would do well to have called them something else really. The Kurve Snake, Kurve Chameleon and Kurve Bull saddles are essentially super-tech versions of the Arione, the Antares and the Aliante respectively. In our experience it certainly makes the range much more logical and easier to fathom!

There must be loads of Fizik users who are fans of an existing Fizik saddle shape who have ignored these funny sounding Kurve things. Ignore them no more. Chances are you can get your current fave Fizik in a Kurve version. Indeed you will probably find Kurve saddles reviewed as ‘Kurve Arione’ as opposed ‘Kurve Snake’, for example. 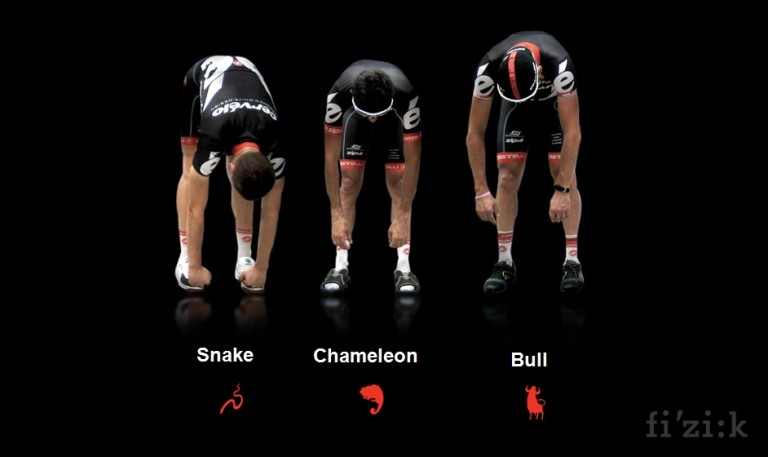 So why are Kurve saddles called animals? It’s Fizik’s ‘spine Concept’. Fizik have split riders into three types depending on how flexible their spines are. Snakes are bendy, Bulls are stiff. Chameleons are in between (the ‘bending over’ pic above illustrates the idea very well). The idea being that spine flexibility dictates what sort of support is required from a saddle.

We don’t need to go over the different shapes of Fizik saddles – because our recent blog has that covered already – so for the purposes of the Kurve range we just have to explain the Kurve-ness of them. What makes a Fizik saddle into a Fizik Kurve saddle? 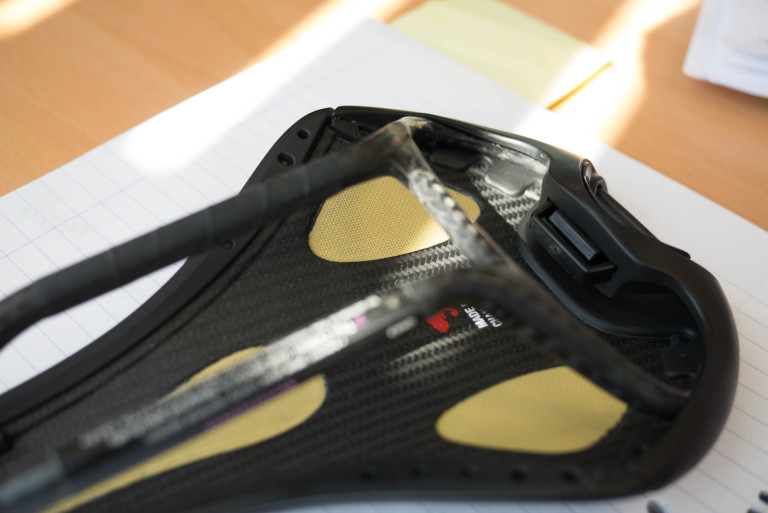 The comfort is provided by three things (not including the overall shape of the saddle). The shell of the saddle is made of a special composite combined with Kevlar. This shell has three large cut-aways in it: two for sit bones, one for perineum. The saddle rails is actually just one rail really; it’s one continuous piece that goes around the rear of the saddle and back into the nose again. This continuous rail is called the Mobius rail. 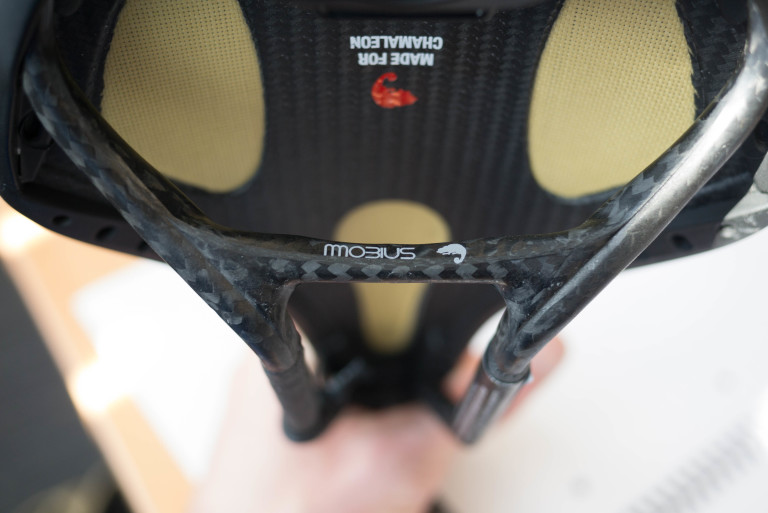 Think of a Kurve saddle as a hammock ie. held at both ends. Unlike most other saddles which are more like a waiter holding up a tray with one hand ie. not supported all the way to the edge.

There is a fifth dimension to Kurve saddles too. You can fine tune the amount of flex that the saddle gives by switching to a different ‘Tuner’. A tuner is a replaceable insert that fits under the nosepiece of the saddle. Every Kurve saddle comes with a Hard and a Soft insert. The soft insert allows the shell to flex a couple more millimetres. 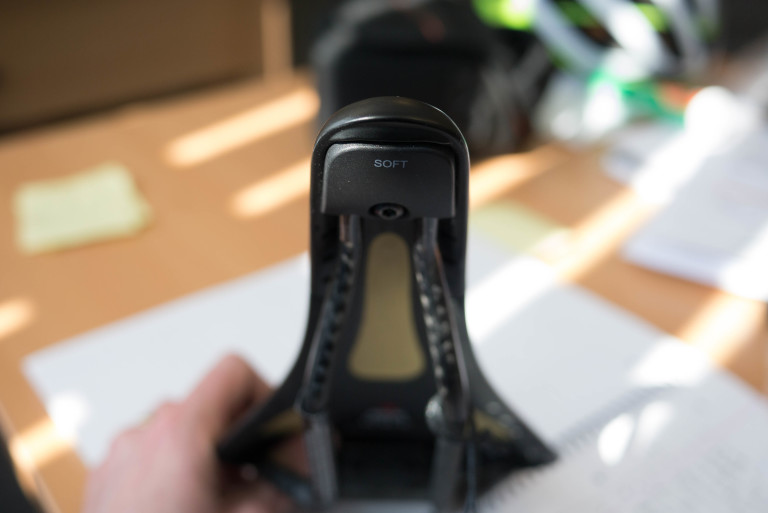 In a funny way this adjustable nosepiece insert in reminiscent of the tensioner found on Brooks saddles. Brooks are a sister company of Fizik so maybe this similarity of tensioning theory isn’t a coincidence. Although the way Fizik have done it is a tad less ‘agricultural’ and is significantly lighter! 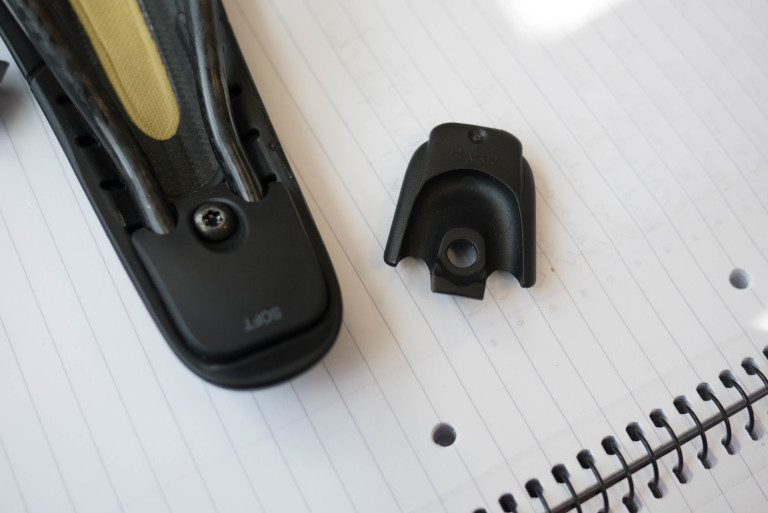 Speaking of weight, Kurve saddles are a bit heavier than their non-Kurve versions. It’s not a lot of weight but we know that a lot of you will want to be aware of this. The trade-up in comfort levels appears to be worth carrying those few extra grams though. You can read some quotes from reviews further down this page.

The cut-away composite shell, the Mobius rail and the nosepiece insert are the key things that you get with a Kurve saddle. 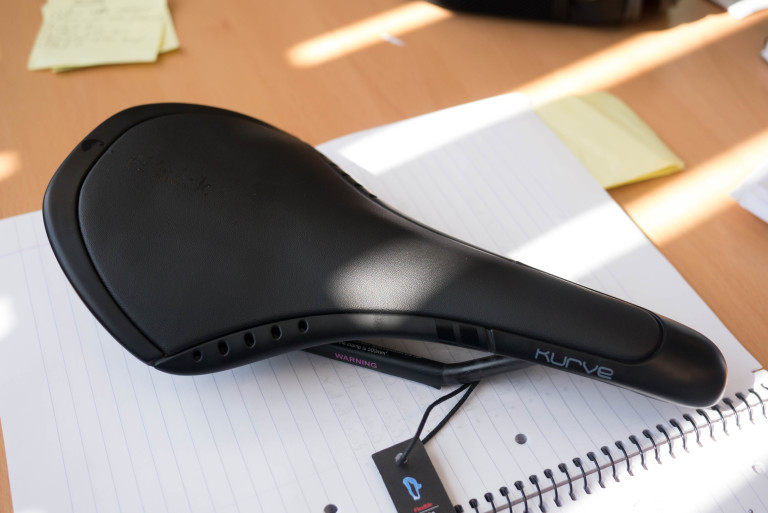 Kurve saddles do come with some of the features that are found on other Fizik saddles. Namely, the side of the saddle are a version of Fizik’s Wingflex sides. They don’t flex quite as much individually and this is a deliberate design. There’s no need for the wings to flex as much because the whole saddle shell is flexing anyway.

They ain’t cheap. And the law of diminishing returns applies. They are comfier than their non-Kurve counterparts but is it worth splashing out the extra? If you’re a high mileage rider then you probably already know the answer.

Anyway, that’s what Fizik Kurve saddles are. What does the press say about them..?

Reviews from the cycling press

“I’ve always been a big fan of Fizik’s saddles having ridden various iterations of Ariones and Aliantes but I’d happily say this Kurve Snake Aluminium is the best so far. Performance and comfort in equal measures.” – Road.cc

“There are lighter – and there are cheaper – but true comfort is priceless.” – Cycling Weekly

“From the first moment I sat on the saddle it felt like it was not there. Even with the lack of foam padding it never left me wanting more on long road rides or even on the trainer!” – BikeRumor

“This saddle has been—for me—a revelation in terms of comfort. It has been the sort of revelation that the old Flite was back in the early 1990s. But this saddle might as well be the Flite’s wilier offspring.” – Red Kite Prayer

“I’ve put around 200 miles on this so far and it’s not only sharp looking but a damn nice ride.” – The Radavist

“The saddle feels active. It works with your weight and pedalling action, rather than being a lump of passive foam glued to a plastic or carbon shell. Instead of foam getting squished and staying squished you can feel the hull moving in a controlled way to help your weight remain applied firmly to the saddle surface. By doing this more effectively it’s allowing you to turn the cranks more smoothly – improving form and efficiency.” – Road.cc

Read our customer reviews on each of the Kurce saddles’ product pages.

The video below is a bit OTT admittedly but it does show you a good exploded diagram of Kurve saddles at round about the halfway point in this video. It’s only a short vid. Check it out…

One comment to “Are Fizik’s Kurve Saddles Worth The Money?”