The Prudential RideLondon Grand Prix was a series of criterium races taking place in London on the evening of Saturday August 9th.

Bex wrote about her preparation for the event last week. Here’s her write-up of how things went on the day. 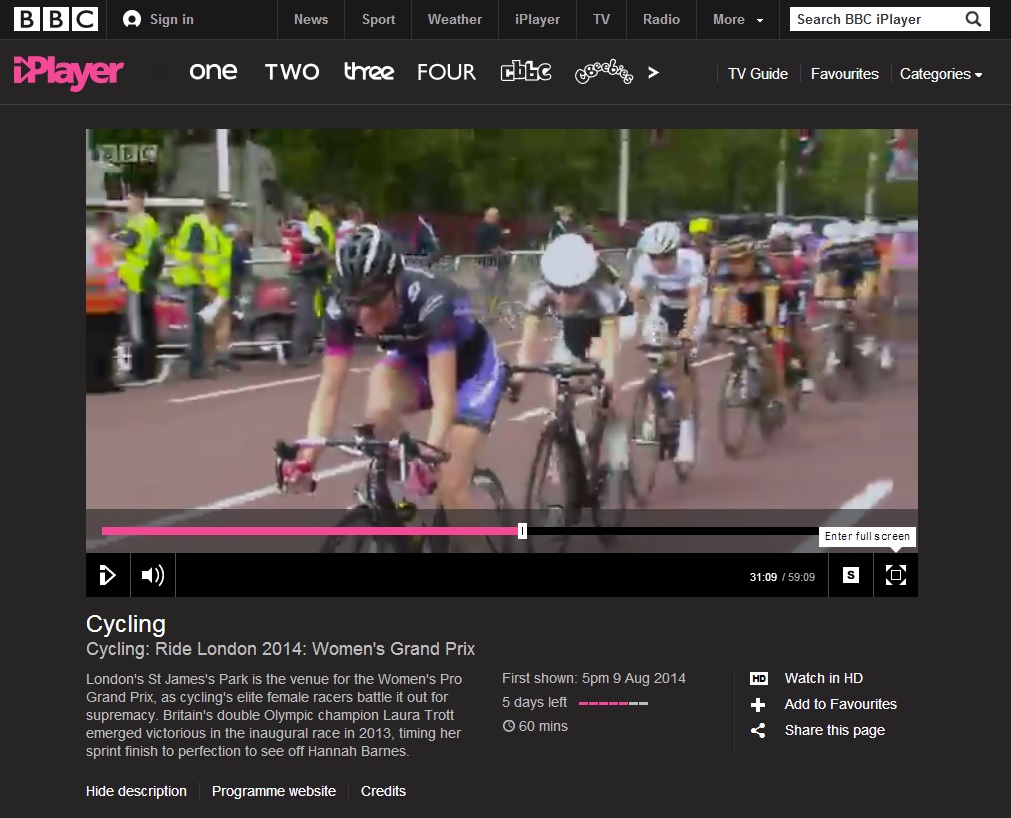 Bex on the Beeb

Over to you Bex…

It was an experience to say the least!

After what turned out to be an absolutely epic drive down to the centre of London from the North West – a whopping 7-hours in the car – I did actually wonder whether at one stage whether I might make it to the race, especially as we reached Hyde Park and the centre of London was all cordoned off by the police for protests.

After a detour which involved 90% of the tourist attractions of London we finally made it to the car park – which was another half a mile away from the start. Luckily I stopped off in Leicestershire and bailed my mum into the car who was lumbered with carrying my rollers and kit across London to The Mall.

Once we finally made it to the pits all the teams were set up with their gazebos and team managers, I set up camp in a small space and began my preparation, the usual pinning on numbers, laying everything out for a swift transition from warm-up to race. There were 100 riders starting the race and we certainly got a cracking day for it with temperatures in the mid-20’s.

The schedule was tight as the cameras were there to broadcast live for the BBC. We lined up for a briefing and were then allowed one lap of the circuit.

I started off at the front behind Lizzie Armistead and Marriane Vos. The first part of the course had nice sweeping bends, but then on the final corner on the back straight it narrowed, this was the first problem in the warm-up lap as no one knew what was coming and sure enough several riders came down which resulted in one rider snapping their frame!

We made it to the start and I ended up at the back – not great! As the flag dropped and the race began it was fast and furious from the start. There were moves going everywhere and it was a case of moving up and making sure you were in the right place.

About twenty minutes into the race and Dame Sarah Storey made a move off the front of the group to which I followed. Watching the event back on BBC’s iPlayer it’s hilarious to hear the commentator suddenly stumble wondering who on earth this girl from Merlin Cycles was!

As we went onto the Mall, I did a quick check under my arm to see whether we had a nice little move going – imagine my surprise to see Marianne Vos World & Olympic champion sat on my wheel. I was slightly overwhelmed then had to kick myself back into touch again.

As we went back onto the back straight a counter attack went straight over the top and so it began again. I must confess to looking up at Buckingham Palace a couple of times. The cheers from the crowds were unbelievable every time we went along the finishing straight.

In the sprint for the finish I came in 30th, which was okay I suppose, but you always go there to win right?

It was great to be given the opportunity as a domestic rider to compete with the world’s best. It’s certainly something I would love to do more of in the future.

I think I’m still coming down from the event now but – after sitting in the car for another 7-hours to get back to Lancashire – the next day was certainly back to earth racing in the cold and rain.

One comment to “Bex’s Blog “My Prudential RideLondon Grand Prix””