A rundown of the eyewear icon’s thirty year history in cycling.

Oakley is the biggest name in cycling eyewear. The American company’s products have graced some of the biggest names in the sport over the last 30 years and for good a reason; their excellence in function and looks.

The Factory Pilot Eyeshade was launched in 1984 and revolutionised the cycling sunglasses market. These new lightweight impact-resistant thermoplastic glasses were a major change from the usual Ray Ban Aviators most cyclists used at the time. 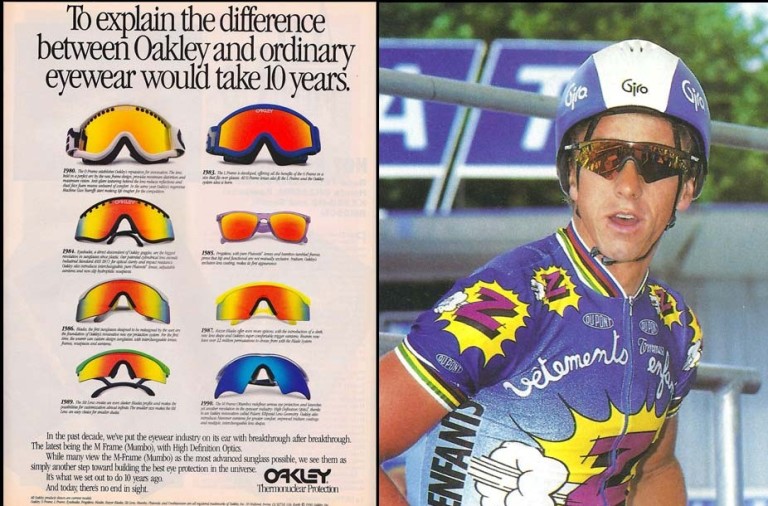 Greg Lemond / Oakley photographs courtesy of GregLemondFan.com – Many Thanks

American Greg LeMond and Australian Phil Anderson became the first Oakley sponsored riders in the professional peloton in 1985 and the following year LeMond won the Tour de France wearing the Eyeshades bringing them to worldwide attention.

Since then Oakley have continued to innovate and create some of the most recognisable and desired sunglasses not just for cycling but a wealth of sports, sporting superstars and even military use.

There’s also a full casual and technical clothing line for a range of sports, footwear, luggage and watches.

Here’s a look at some of the highlights (and one lowlight!) in the Oakley cycling range over the years.

See how many you recognise, owned, lusted after but could never afford or justify, and which ones you wished you’d never got rid off! 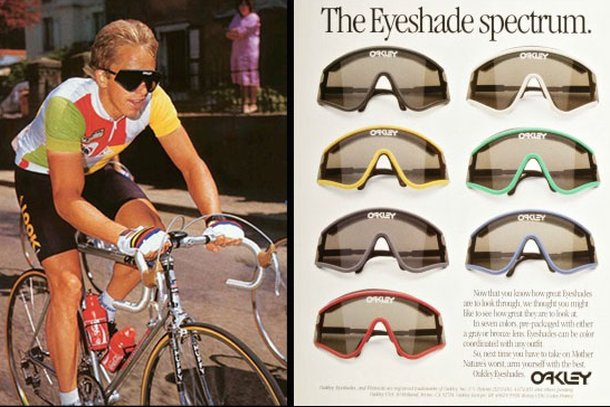 These were the first sunglasses produced by Oakley and the ones that launched them into the big time.

They were so different from anything else at the time and instantly became a hit. The brow sweat pad always fell off after a while but no one cared as they were so cool and new. 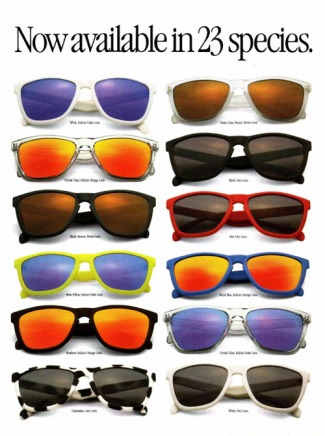 These were the casual sunnies from the big O and were common with surfers and skaters due to their old school shape but with modern colours.

They were re-released a few years ago in even more colour ways and slightly different shapes. 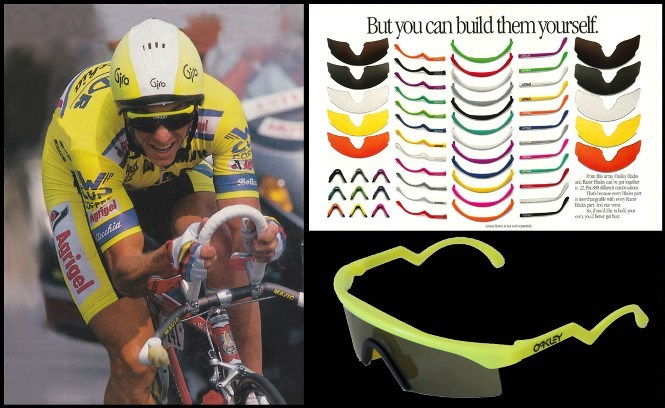 These were the second cycling specific glasses from Oakley and if you had these you were even cooler than the kids with Eyeshades. Brought back a few years ago and made me wish I’d never sold my white ones. 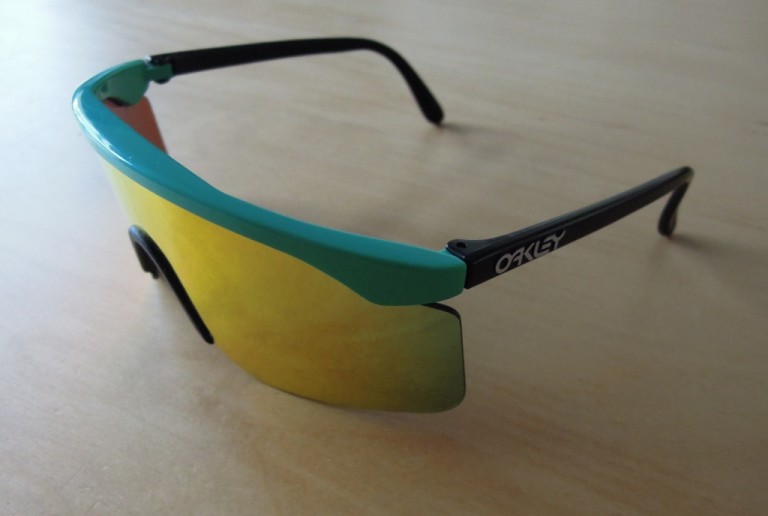 The Blade came out soon after which had a slightly bigger lens and straight arms.

The Blades were my first pair of Oakley’s and I remember saving for ages then deliberating on which colour to get. They had to be Iridium lenses and this was the most popular colour way at the time. 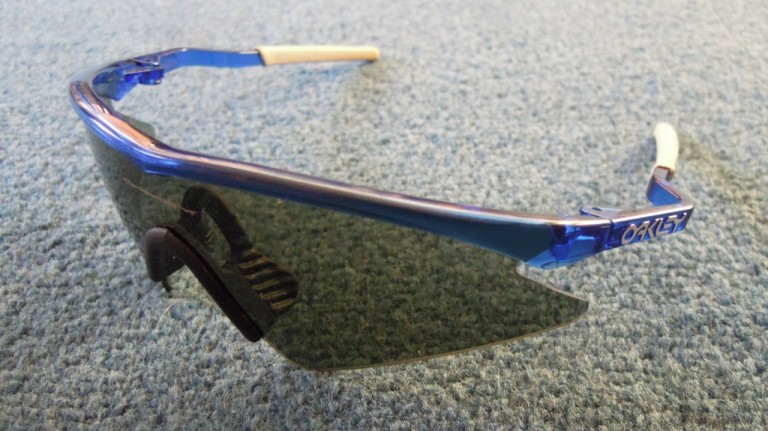 Probably the most iconic Oakley sunglasses and probably the biggest seller as they have been produced for 25 years.

They made changing lenses a doddle and as the frame was standard you could put any M Frame lens style or tint you wanted in a few seconds. The original versions like those pictured had square shaped arms with hinges. The next version was a one piece brow/arm but nowadays they have gone back to the hinged version.

I think most road cyclists have had a pair of these at some time or another and still very popular today. Also approved for use with the US military(!) 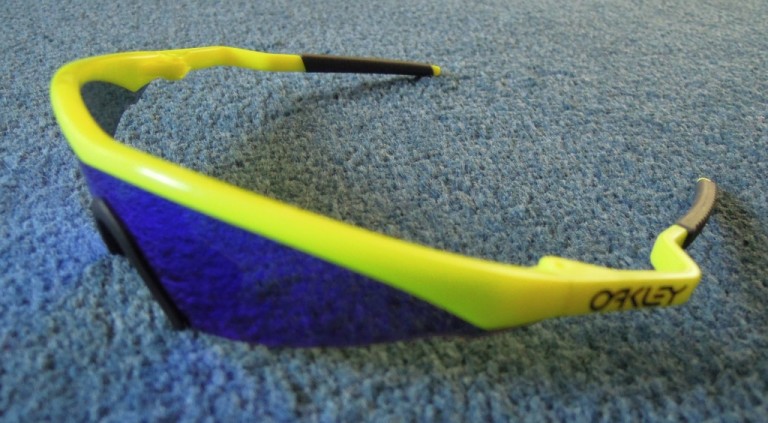 These were the M Frames made famous by LeMond at the 1990 Tour de France; I swear they channelled more air into your eyes than deflected. 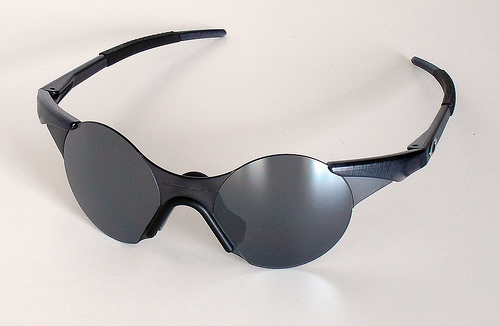 I absolutely loved these glasses; they weighed zilch and there was nothing like them out at the time either. I still don’t know why I gave them to my brother to get the new version a few years later 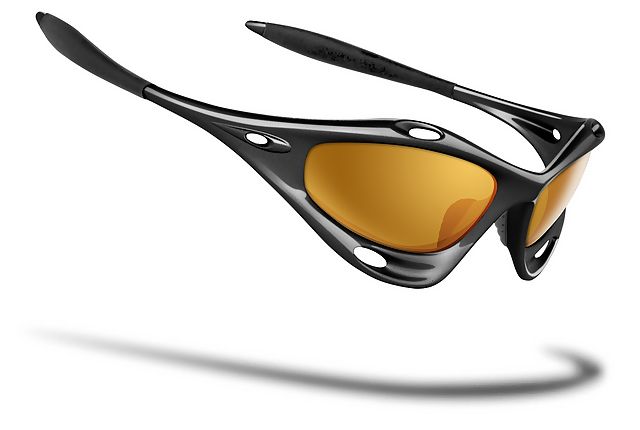 One rider is synonymous with these sunglasses and that was the American George Hincapie. He always wore these on the bike and one of the few people to look cool in them.

The one piece frame and arms took a bit of getting used to but gave a good amount of protection for the eye. They never were as popular as the M Frame though. 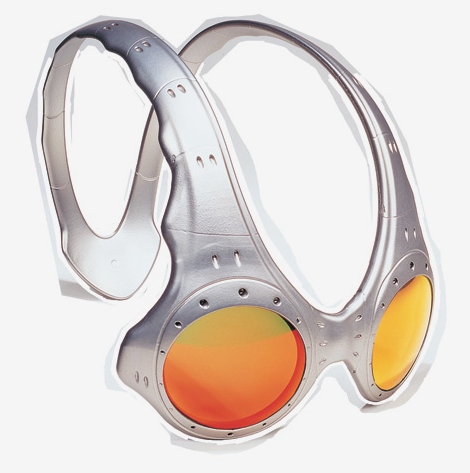 Don’t know what Oakley was thinking with these but they certainly got people talking.

David Millar wore a pair under his time trial helmet in the Tour de France one year; can’t remember ever seeing them on another sportsperson after that, or anyone!

The radar was the new version of the M Frame and has become the M Frame for the 2000’s generation of cyclists. These are excellent glasses and probably the only ones to come close to the iconic M Frame.

These created quite a stir when they first came out as they were a full frame round the lens but the ingenious hinge allowed easy lens changes, something which wasn’t available on the Radars.

Mark Cavendish was the poster boy for these and won quite a few Tour de France stages as well as many other races in these giving them lots of exposure.

These have now been updated and given a new name as the ‘Heritage Racing jacket’ in homage to the 1998 model but we can’t see any difference between these and the Jawbones.

The only downside with Radars is that you can’t change lenses; I’ve seen some people do it but not convinced.

Thankfully Oakley came up with the Radar-Lock which uses a small inconspicuous hinge on the frame to allow much easier lens changing but retains the classic Radar styling in updated colours.