What is it about Thomson’s stuff that makes it the go-to choice for an increasing number of cyclists?

Although the first Thomson bike product only dates back to 1995, Thomson as a company dates all the way back to 1968. It was in 1968 that Ronnie and Margaret Thomson set up their first machining shop called NEMCO (Numerical Engineering Machine Company). They mostly make stuff for the aeronautics industry.

From NEMCO to Thomson

In 1992 the company moves into a designed-by-Ronnie 60,000+ square foot facility in Macon, Georgia. This is roughly four times the size of their previous building. Macon was the birthplace of Otis Redding and Little Richard (random pub quiz fact for you).

It is around this time that Ronnie and Margaret’s kids are becoming really into cycling. Their daughter is in a cycling team and has a team mate who is a neighbour of Gary Klein (legendary early MTB designer). Klein and Thomson get to hear about each other and Gary Klein suggests that someone needs to make a decent seat post for mountain bikes.

And the rest is history. 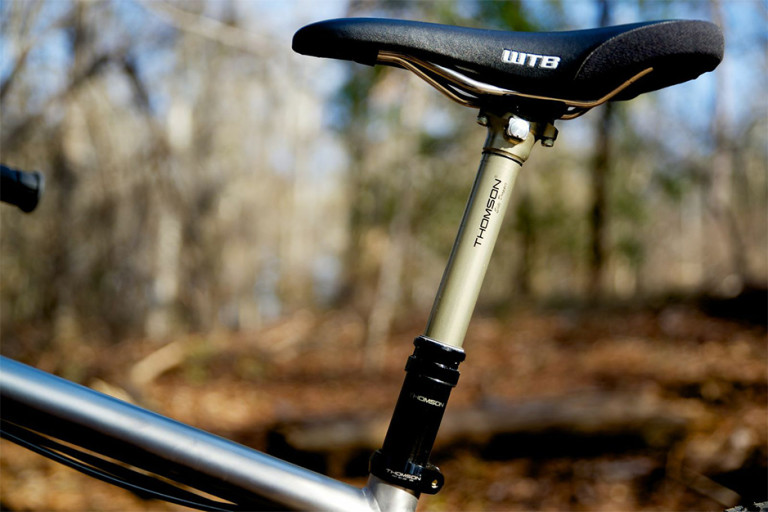 Stems came along in 2000 and proved to be every bit as popular as their seatposts. In 2012 Thomson brought out their dropper seatpost.

Sadly in 2008 Ronnie passed away, leaving Margaret as the CEO and their son Brian as President.

The next move from Thomson appears to be manufacturing their own carbon fibre in-house. We shall see. Let’s not forget that 70% of Thomson’s business comes from the aerospace industry and aerospace needs its carbon fibre just as much as us cyclists.

Thomson products are stiff and reliable. They’re designed and manufactured with an extremely high amount of attention to detail. Little touches such as: the seatposts have longer than normal saddle rail clamps (for spreading the load better), the seatpost collars use a bolt, washer and barrel design that allows for float and an even clamping force when tightening it all up.

But arguably the main USP of Thomson is that their stuff is super strong. Their posts and stems are up to 40% stronger than their rivals.

Their dropper seatpost is known in the industry as being the most reliable and easy-to-live-with dropper post out there. And it’s one of the lightest too.

Virtually all Thomson components are 100% made in the USA. For example, the blocks of aluminium come pre-cut from Indiana after being extruded originally in Minnesota. Once machined, the parts go over to Pennsylvania to be anodised.

Thomson products have a definite stlye and aesthetic to them as well. You could tell a Thomson component straight away even if it had its logos removed. Not that you will ever see a Thomson logo removed as their laser etched on and ultra durable.

Thomson aren’t stuck in the past. But they don’t bring out new versions of their stuff every year either. One of Thomson’s skills is updating their range or bringing out new products only when the time is right and the product is up to their exacting standards.

The choice of experience

Thomson products aren’t the cheapest. They aren’t always the lightest. But to an ever-growing number of cyclists they’re the product of choice.