I recently moved house. This presented me with a problem. How to store my bikes and bike stuff. As I browsed around for solutions and ideas it occurred to me that plenty of other people will be the same boat. So I thought I’d share my ideas and suggestions with y’all. 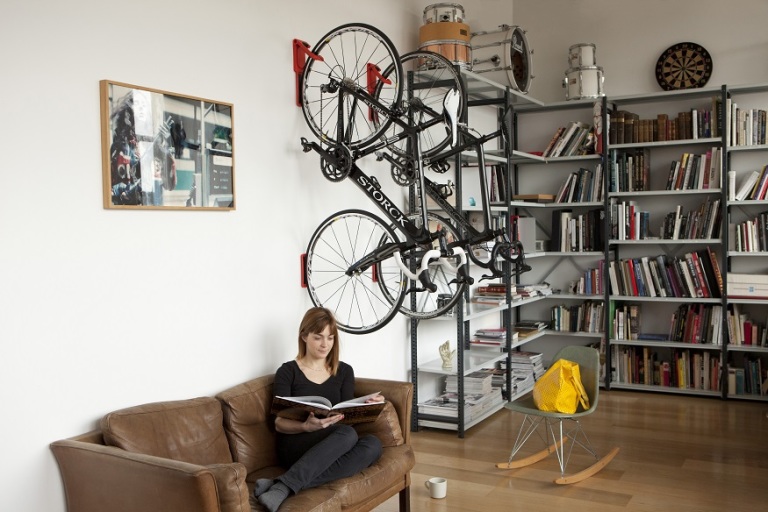 This must be the home of a really, really tall darts player. Anyway, the pic above shows two Cycloc Endos (this is an old post and the linked content no longer exists) in action.

Cycloc are bike storage specialists. They’re a relatively new company. They don’t do a massive range. But the stuff they do is excellently made and stylishly designed.

The Endo – as the name kind of implies – involves hanging one end of your bike off a hook. This hook is rubber-edged to protect your wheel rim and it also folds flat when not in use. The hook accepts pretty much all wheel sizes from BMX to road bike.

You can hang either your rear wheel or your front wheel from the hook. This is a useful feature if you wish to use two or more Endos next to each other. With the bikes alternating between rear wheel-hung and front-wheel hung you’ll have less problem with handlebars clashing or tangled up with each other. 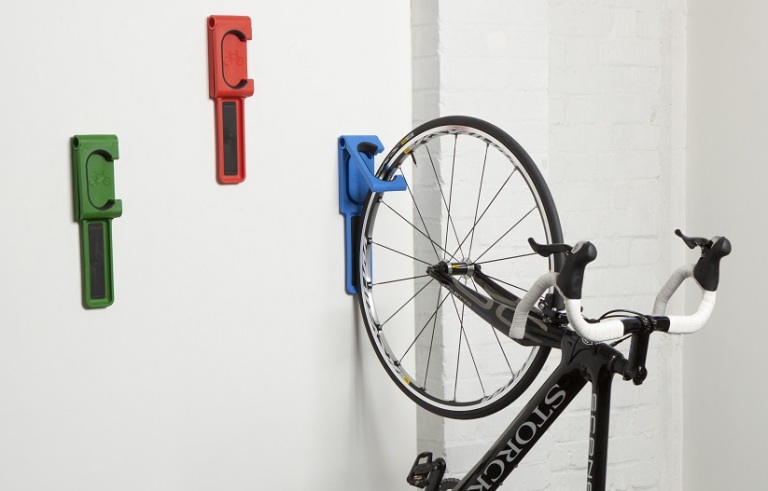 The Endo comes with a second item that mounts below the top hook. This is a wall-mounted pad that both protects your wall (if you’re precious about paintwork etc) and also stops the bike from swinging or pivoting around too easily. It’s a bit of gripper as well as a protector.

A further little additional feature is the ability to stow a D-lock in the top hook part. This offers a bit of extra security – just make sure that you combine a D-lock with some toughened cable or chain that passes through your frame properly. 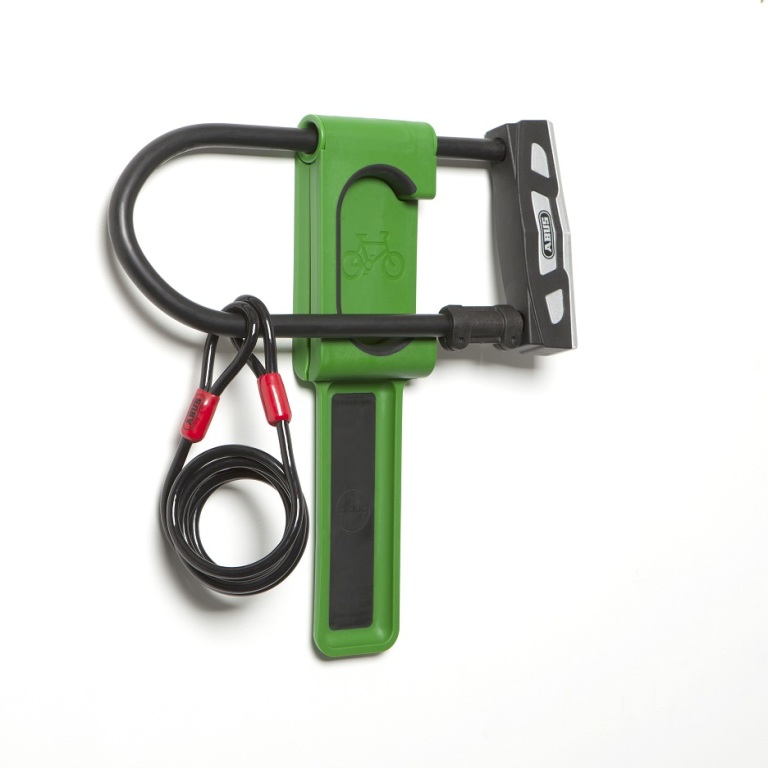 Yep, Cycloc again. The Cycloc Loop (this is an old post and the linked content no longer exists) is their original, start-up product. It’s a design that is aimed predominantly at single-bike owners who may have to store their bike inside the house.

Ingenious top-tube mounting design that is quick and secure. It’s also more adaptable to different top tube styles than you might think. It’s not restricted to skinny horizontal straight road bike top tubes by any means. 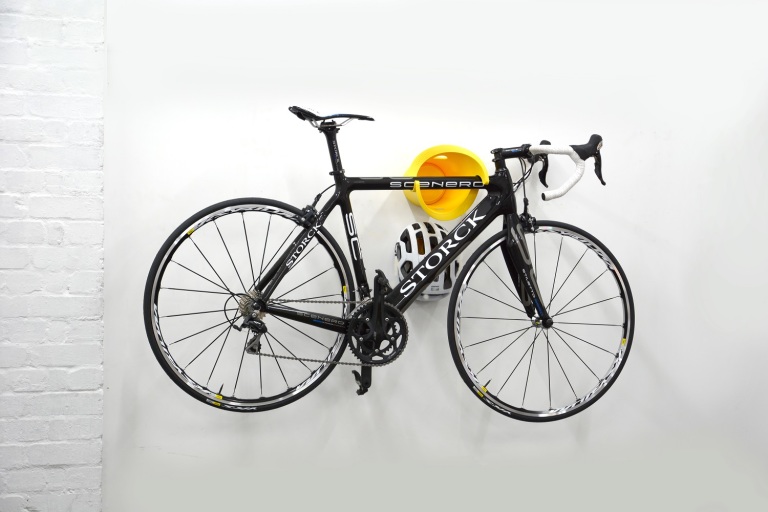 They don’t mention it very much but the Cycloc Loop can be pressed into service as a rudimentary workstand too for working on your gears.

The Loop is quite an in-yer-face display of bike storage. Some people like this. Some may opt for a different system 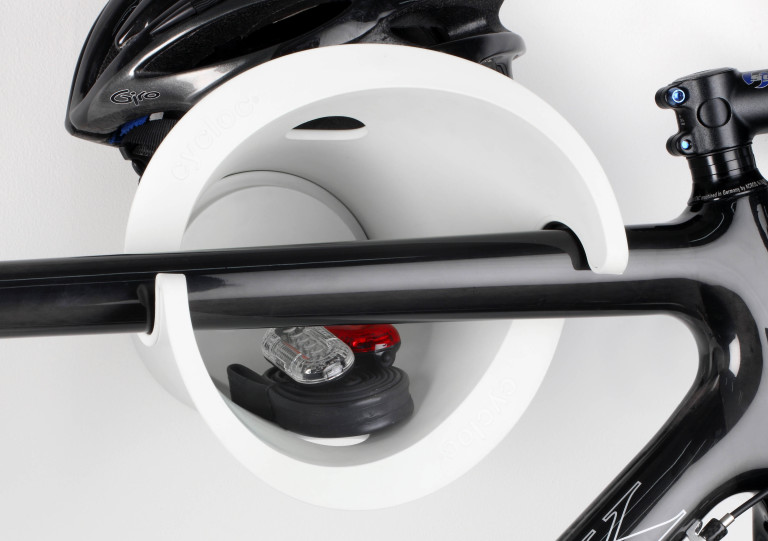 Now we’re getting into the realm of the serious multiple bike-owning household. The Steadyrack is another two part system (an upper ‘hook’ and a lower ‘bumper’).

The unique thing about it is its swivelling top part. This means you can make the bike lie closer to the wall during storage. You can also swivel bikes out of the way to access and remove/put-back another bike. 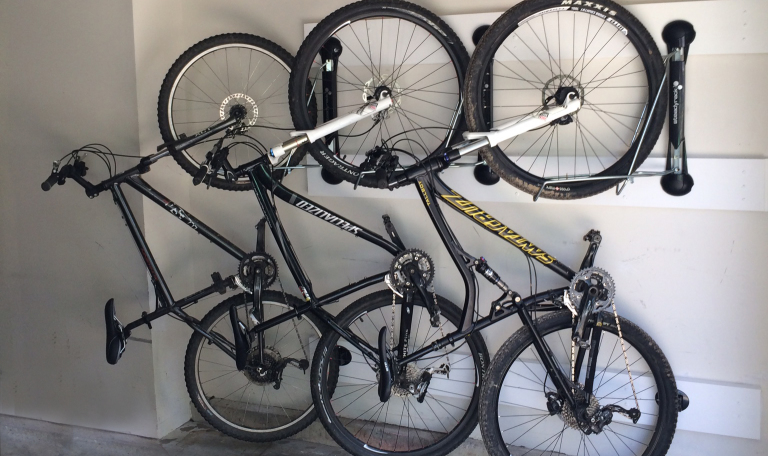 The Steadyracks can be folded up flush to the wall mount panel when they’re empty (unlike the picture below which shows them empty but not folded back up). I’m sure you get the idea anyway. They fit pretty much any bike – even 29er mountain bikes. 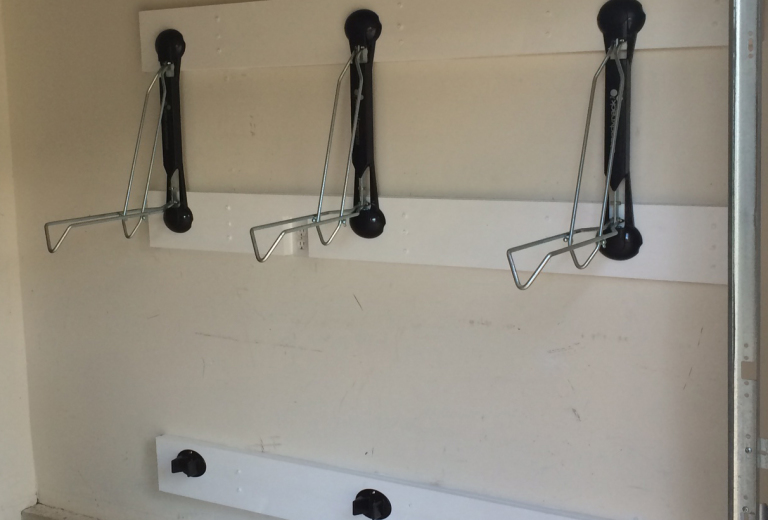 If you’re unwilling or unable to have anything permanently bolted to your wall then this is where the Minoura Tancho D’esse D2100 comes in.

The key to this stand is its adaptability. You mount bikes vertically or horizontally. If the latter, you can mount it via the rear wheel or the front wheel.

The wheel rest brackets can be adjusted too to accommodate different wheel sizes. 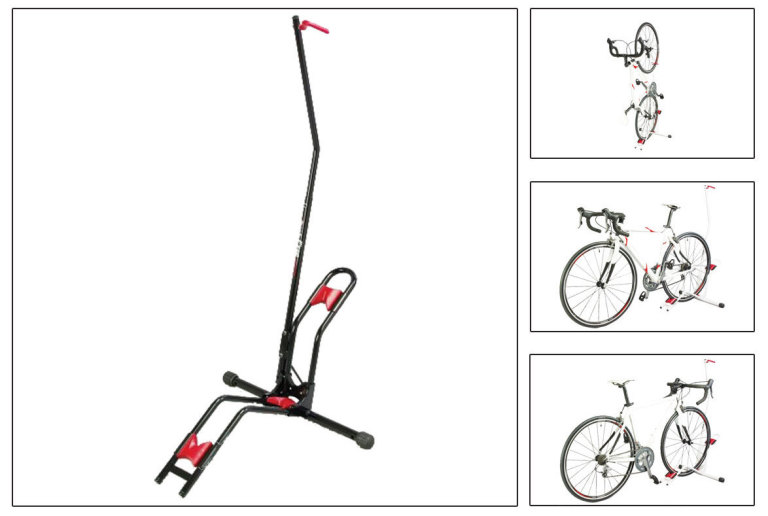 We use these little things on the shopfloor of Merlin. Minoura DS-520 stands are ideal for displaying bikes but they’re also quite a good idea for domestic bike storage on a budget.

They add a bit of stability and spacing-away from other bikes (or other stuff in your garage). They also double as a dinky workstand for doing little tweaky jobs on your gears. They fold-up too if you don’t need to use them for a while. 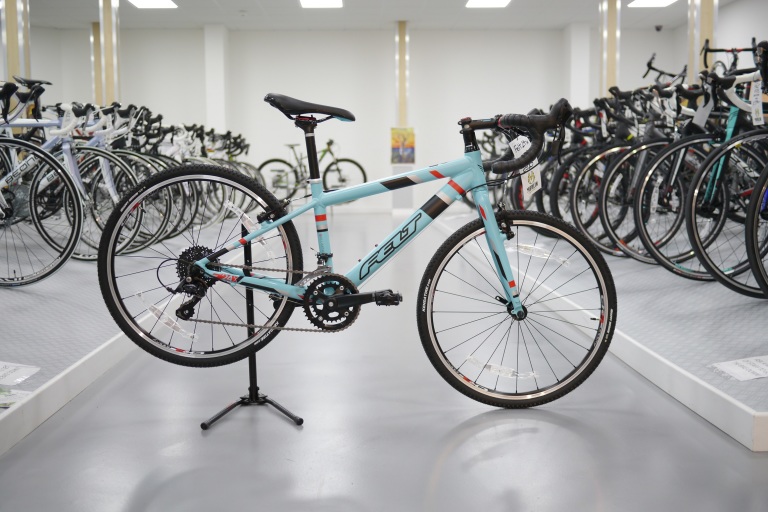 Admittedly this is getting into some fairly niche territory. But there will be some folk out there who have been looking for something like this for ages. It’s like a big padded Ikea bag for your bike.

Initially designed for using when transporting bikes around in the back of cars and vans, the Evoc bike cover (this is an old post and the linked content no longer exists) has also been used by mountain bikers who live in smaller houses or flats who want to keep their mucky, oily bike safely contained away from carpets or decor. 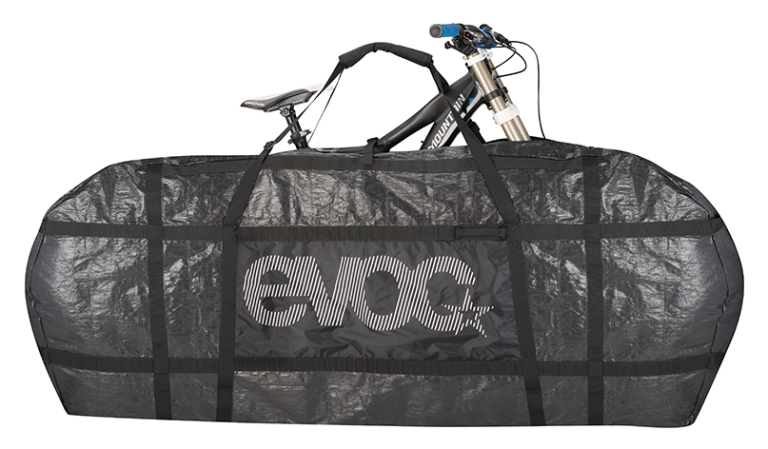 Now personally I’ve been down the DIY option before and it’s not ended well. You are probably more skilled than me in the dark art of making stuff from stuff. Wood, pallets, uPVC piping, hooks and stuff.

So feel free to have a look our Pinterest board called ‘DIY bike storage’ (click on the picture grid thingy below and it will all make sense). Equal parts inspiring and daunting!