Did you know Peter Sagan has a bike racing brother? Or that the Martins are related to the Roches? Here’s a rundown of famous cycling siblings and pushbike parents.

There have been, and currently are, quite a few famous families in cycling over the years. Do you recognise any of these family trees..? 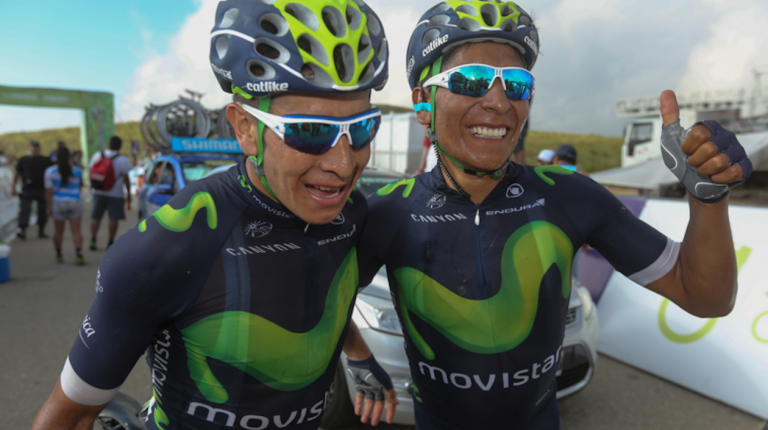 Columbian climbing sensation Nairo is bound to win a Grand Tour soon with his incredible attacks in the high mountains.

His younger brother Dayer also rides in the same Movistar team and is also a handy climber who’s not averse to helping his more famous brother.

The best cyclist of all time is the Belgian Eddy Merckx. He won just about everything multiple times in the 1970s and such was his fearsome reputation for smashing competitors his nickname was ‘The Cannibal’.

With very, very large shoes to fill, his son Axel become a professional cyclist. Although burdened with the family name Axel still carved a career for himself as solid rider. He knew he was never going to be as good as his father but he was happy with his lot nonetheless.

Unfortunately the rest of his career was blighted by injury but he was still an incredible rider and one of the smoothest pedallers out there.

His brother Laurence rode with him on several of his teams and while Laurence never achieved his brother’s greatness he was still a valuable member of the team.

Stephen’s son Nico is now one of the most trusted lieutenants and road captains at Team SKY and can often be seen driving the bunch on mountain stages setting up the team’s GC leaders.

Birmingham-born Dan Martin has won several of cycling’s Monuments: Liege-Bastogne-Liege and the Tour of Lombardy as well as various stages in the Grand Tours.

His dad Neil was a professional cyclist and a prolific winner of many races in the UK; winning the British Professional Road Race title as well as representing GB twice at the Olympics.

Team Sky is home to the Columbian cousins Sergio and Sebastian. As you would expect they are both very good climbers. The older of the two (Sergio) is having more success at the moment but – at only 22 – Sebastian has a bright future ahead of him too.

Britain’s favourite cyclist Sir Bradley Wiggins needs no introduction. But did  you know his father Gary was a professional cyclist racing mostly on the track and Six Day circuit?

Well, you do now.

The German Erik Zabel was a formidable sprinter winning the Tour de France green jersey six times as well as many other great one day races including Milan–San Remo.

His son Rick is now racing for BMC and is carving a name for himself as a handy sprinter too with many wins already despite only being 22 years old.

Super Sid Barras was a feared sprinter on the UK professional scene in the 1970-80s. Hundreds of wins mostly got from his formidable sprinting ability.

His son Tom rode for several UK-based teams and is now involved in the backroom squad with UK team NFTO.

Winner of the now defunct Milk Race in the 1990s, Chris Walker was another solid UK road rider with a very handy sprint and many wins to his name.

His daughter Jessie now rides as a professional with Italian team Servetto-Footon while son Joey is riding on the GB team.

Nick Craig is a mountain bike legend. He’s been riding for years and is still dishing it out in the Elite category despite being a Veteran. He’s also ridden some very big road events including the Olympic Games (in mountain bike pedals and shoes!)

His sons Charlie and Tom are following him with great success; representing GB, winning races and national titles.

American John Tomac was and, to most, still is the best all round mountain biker ever. He raced XC then raced professionally on the road in some of the biggest races in the world before going back to mountain biking and winning World Cup downhills.

Many thought his son Eli would follow him into the world of mountain biking but he has become a very successful motocross but still lists his number one hobby as mountain biking.

How we’d love to see just how good father and son are in a DH race!

How do you deal with the pressure of being a sibling of a champion? Do you accept that they are the star and do all you can to help? Or do you try to stay separate in your job and make a name for yourself in your own right?

Current world road race champion and all round people’s favourite Peter Sagan’s older brother Juraj races on the same World Tour team as his bro and is happy to work for his younger sibling in races.

Much to the dismay of commentators – and most spectators – the Yates twins are identical and race in the same team Orica-GreenEdge.

They’re only 23 years old and have a very bright future ahead of them. You have time to learn the difference as you’ll be seeing a lot of them.

Dutchman Jean-Paul was one of the best sprinters in the world in the 1980s winning many Tour de France stages.

His two sons are now riding at the top level with Danny at Team SKY and Boy at Trek-Segafredo both with handy sprints, perhaps unsurprisingly.

Luxembourg brothers Frank and Andy have had up and down careers. Both were Tour de France challengers a few years ago with Andy winning the event in 2010 but never coming close again.

Andy has now retired due to injury while Frank is still riding with Trek-Segafredo.

Their father – Johny – was also a professional rider and acted as a mentor for them.

Spaniard Miguel Indurain won the Tour de France five times in the 1990s as well as the many other races.

His younger brother Prudencio was with him throughout his career and a solid rider but more of a helper than a winner – which suited them both.

As a family the Planckaerts are synonymous with cycling in their native Belgium. Brothers Eddy, Willy and Walter were all famous in the 1980s with Eddy arguably the best; winning the Tour de France green jersey along with Paris-Roubaix and the Tour of Flanders.

Willy’s son Jo also went on to become and professional cyclist in the 1990s.

The most famous brothers in triathlon are Jonny and Alistair Brownlee.

Both are multiple world champions and Alistair is the reigning Olympic champion from London 2012 (Jonny won bronze at the same event).

The Athertons really are a mountain biking family with all three siblings Dan, Gee and Rachel coming as a ‘package’ for sponsorship deals – Atherton Racing.

Between them they have won pretty much everything in downhill competition and they still like having fun on their bikes despite the pressure.

Have we missed anyone?

We’re sure we have. Let us know in the comments below.