And so the final Monument has been and gone, rounding off the Monuments this year in superb style. With a star studded field, and a challenging set of weather conditions, the task of winning this difficult race was made even harder.

The likes of Dan Martin, Alejandro Valverde and defending champion, Joaquim Rodriguez pitted against each other to take the win, in a race which saw just 53 of the initial starting field of 195 finish.

So how did the Classic of the Falling Leaves end? Who was victorious? For the final time this year, which were the winning manufacturers? 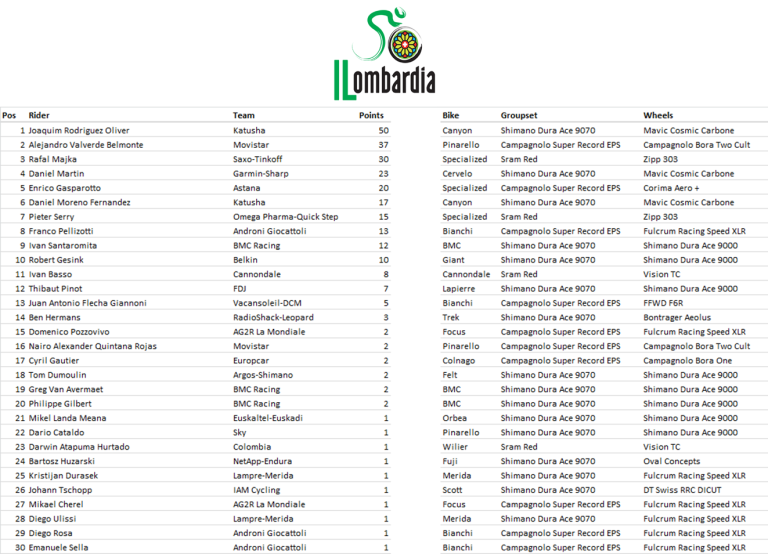 After a punishing 240km+ ride from Bergamo to Lecco, Rodriguez broke in the final climb, attacking the Villa Vergano and soloing from there on in to victory. Without radio for a lot of the ride, Rodriguez reveals it was only in the last kilometre that his team were able to tell him he had a gap in excess of 15 seconds. There was to be no repeat of the heartbreak at the World’s a little over a week earlier, Joaquim adding another Monument to his Palmares.

Also, as Chris Froome was a non starter in the Giro di Lombardia this means that Rodriguez tops the World Tour league for a second successive season. (to be honest I don’t think CF will mind that, nor would he swap his yellow jersey for the World Tour top spot!)

Here is what this meant for the Manufacturers 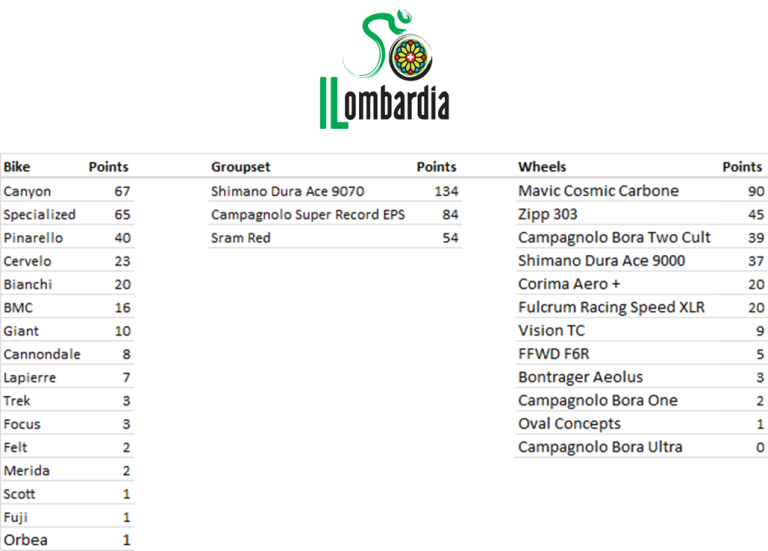 A rare win for a manufacturer who isn’t Specialized or Trek!!!  While we have nothing at all against Specialized, or indeed Trek, it’s always nice to see a new champion. Congratulations Canyon! (another brand we don’t sell!)

Congratulations also to Shimano who have continued their dominance throughout the season in the groupset category, as well as winning most of the Wheels League events also.

Well done to Mavic for a bruising victory here in the Giro di Lombardia.

Well, that’s it for the year as far as the Manufacturers League is concerned. There are a few more road competitions to look forward before the season takes a break, and then it’s on to the CycloCross season! Plenty for all you sports fans out there to keep busy with.

Thanks for reading the posts this year, and I hope you enjoyed the Manufacturers League.