The first Grand Tour of the year is here! The Giro D’Italia (Tour of Italy) starts in Belfast on Friday 9th May and promises three weeks of hard racing against a backdrop of breathtaking scenery.

The second biggest stage race in the world has a reputation for the most passionate fans and some of the steepest and most iconic climbs in the world. With the 2013 champion, the Italian Vincenzo Nibali not riding this year, the 2014 edition is looking like a very open race. 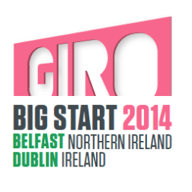 The Grand Partenza – The Big Start

Yes you did read that right; the Tour of Italy is actually starting in Northern Ireland and after three days transfers back to Italy. The race takes the unusual step of starting on a Friday with a very early rest day on the Monday to transfer back to southern Italy.

The three stages in Ireland are a team time trial in Belfast on day one and a road stage on day two again starting and finishing in Belfast and taking in the world famous Giant’s Causeway. Stage three is from Armagh to Dublin where the riders will then board planes back to the Italian mainland.

The Irish stages and the first week in Italy are more suited to the sprinters but the battle for overall will start on the second week when the race enters the mountains.

Stage eight to Montecopiolo and nine to Sestola should show who’s in contention but the real fireworks are the week after.

Stage 16 to Val Martello may only be 139km long but takes in the Gavia and Stelvio passes along the way – if you’re planning on pulling a sickie during the race to watch then this is the day to do it!

A succesion of mountain stage follow including a  26.8km mountain time trial to Monte Grappa on stage 19. The penultimate day of racing sees the riders finish atop the absolutely brutal climb of Monte Zoncolan which although only 10km long is so steep in places many riders are forced to walk.

This climb pretty much ensures action and suspense right to the final climb of the race as the last stage is a flat affair for the sprinters and a procession for the overall winner. 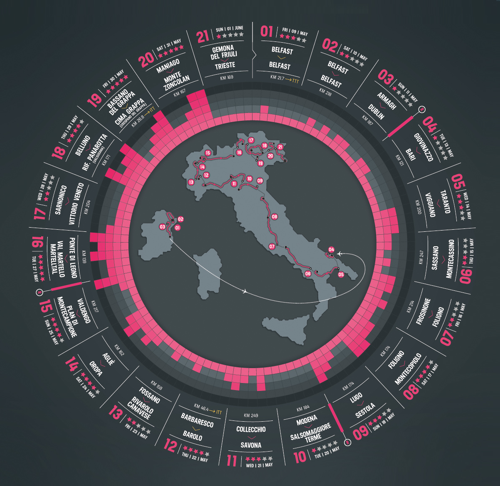 The 2013 champion the Italian Vincenzo Nibali (Astana) has broken the hearts of the his countrymen by deciding not to defend his title and instead concentrate on the Tour de France this year. That leaves the race very open with only a few real contenders but no clear favourite. 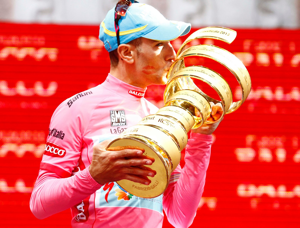 2013 champion Vincenzo Nibali is skipping the race this year, who will win in 2014?

Top of the pack is the Columbian Nairo Quintana (Movistar)who placed second overall and King of the Mountains at the Tour de France last year on his first attempt. 2011 Tour de France winner, the Australian Cadel Evans(BMC Racing) is looking strong and always rides well at the Giro so may well be a dark horse.

The Spaniard Joaquim Rodriguez (Katusha) has come close to winning before and the Columbian Rigoberto Uran (Omega Pharma-QuickStep) has shown he can compete for the overall in the Grand Tours. Michele Scarponi (Astana), Domenico Pozzovivo (Ag2r-La Mondiale) and Ivan Basso (Cannondale) are Italy’s best hope for a home win and will be sure to try their best although overall victory may be more romanticism than a reality.

With the race starting on Irish soil for the first time ever there will be plenty of support and interest in the three Irish rider’s in the race. Dan Martin (Garmin-Sharp) alongside his cousin Nicolas Roche (Tinkoff-Saxo) are talented stage racers and will be going for stage wins and should place highly on the overall as well.

Philip Deignan (Sky) has ridden the Giro before and will be looking to shine in the mountain stages and hopefully add to his Tour of Spain stage win from several years ago.

There will also be several British riders taking part who will also no doubt be getting a large amount of support from the Irish crowd as Team Sky are fielding Ben Swift for the sprints and Peter Kennaugh for the mountains.

There are several classification jerseys as well as the overall leader which are presented daily and provide an ongoing race within a race throughout the Giro.

Pink jersey – overall race leader.  The jersey is pink in honour of the race’s early sponsor the daily newspaper La Gazzetta dello Sport whose pages are pink and the colour has become synonymous with the race.

Blue jersey  – best climber. Points are awarded on climbs with higher mountains giving more points. This was green until a few years ago when new sponsor requested new colour.

Red jersey – points classification. Otherwise known as the sprinter’s jersey as it is for the most consistent finisher overall rather than leader on lowest overall time.

White Jersey – best young rider. Awarded to the highest placed overall rider under the age of 25. 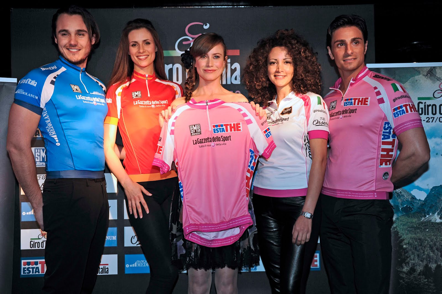 2014 Giro D’Italia jersey presentation, real riders will be wearing them in a few weeks time.