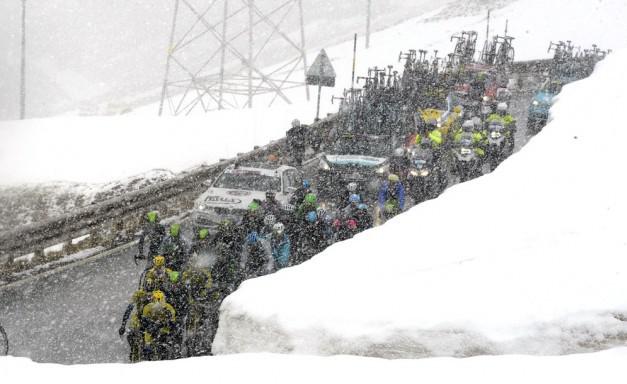 Today was the Queen stage of this year’s Giro and although it was only 139km it took in 4300m of climbing over a distance of 60.6km meaning there was actually more climbing than descending during the stage. It tackled three of the most iconic climbs on cycling – the Gavia (2621m), the Stelvio (the highest point in this year’s race at 2758m) and the Monte Martello (2059m), and if this wasn’t difficult enough the weather was also dreadful with snow covering the climbs. There was controversy as the organisers had allegedly announced they would neutralise the descent of the Stelvio for safety reasons but didn’t and later said they never announced such measures. This lead to confusion as some teams interpreted this as a chance to take it easy while others didn’t get any messages and drove on. Nairo Quintana (Movistar) took the stage and moved into the pink jersey after breaking away mid stage and later said that he didn’t receive any message of neutralising the stage and anyway all his time gains were on the last climb of the day.

Special mention of the day has to go to Team Sky’s Ben Swift who finished in 25th position on the stage, one place behind former winner Ivan Basso (Cannondale), despite him being labelled as a non climber! 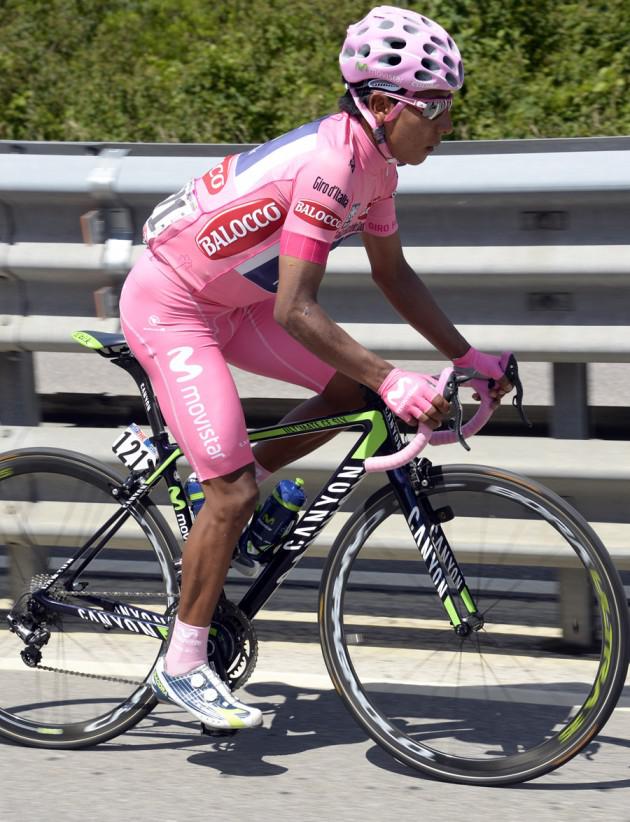 The controversy from yesterday’s stage spilled over into today. The confusion over whether the organisers had agreed to neutralise the race on the descent of the Stelvio or not left many teams unhappy with the way the organisers communicated news and dealt with the ensuing confusion. There was a threat of a rider strike at the start of today’s stage such was the team’s unrest but nothing transpired. This one is bound to rumble on especially as Quintana took the pink jersey after breaking away mid stage and also highlights the old debate of who is in control, the rider’s or the organisers. In the end it was a quiet day for the overall contenders as Stefano Pirazzi (Bardiani-CSF) won the thankfully uneventful stage.

Deignan gets a podium place on the stage 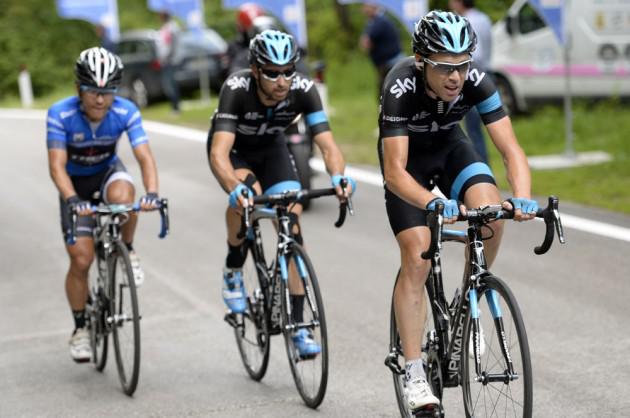 Irishman Philip Deignan (Team Sky) finally got some reward for his constant attacking in this year’s race with third on today’s stage. This is the first time an Irish rider has got a podium place on a Giro stage since Stephen Roche in 1989. We thought he might have gone on to win the stage but he later admitted that the Columbians with him in the break, stage winner Julian Arredondo (Trek Factory Racing) and Fabio Duarte (Columbia), were simply too strong and were just playing with him with their constant attacking and changing rhythm. 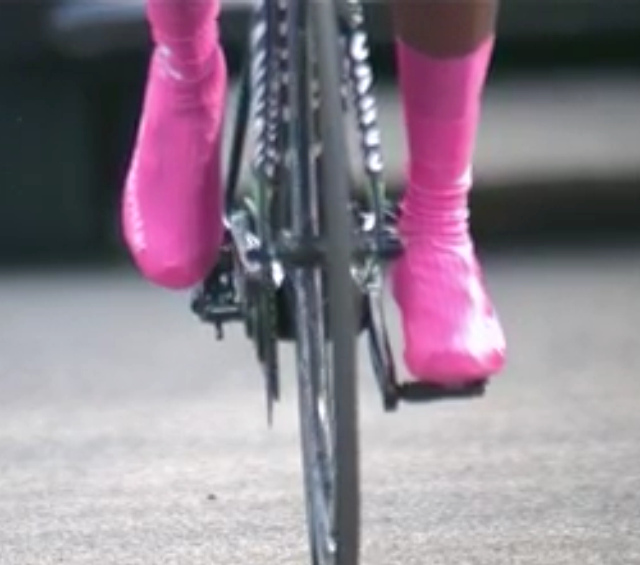 Nairo Quintana had every right to start today’s mountain time trial stage in pink from head to toe but we’re not sure about those tall pink aero oversocks. They were indeed effective as he won the stage but with the shiny material coming half way up his legs they looked like the missus’ festival wellies. 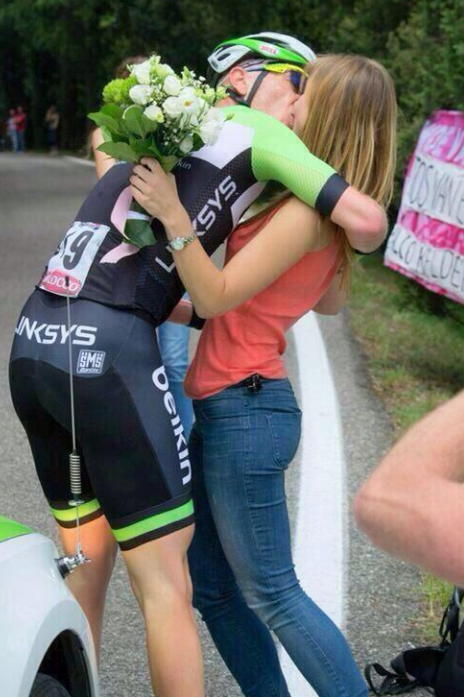 Shout of the day has to go to Belkin rider Jos van Emden who stopped during his ride today to propose to his girlfriend watching at the side of the road – she said yes! 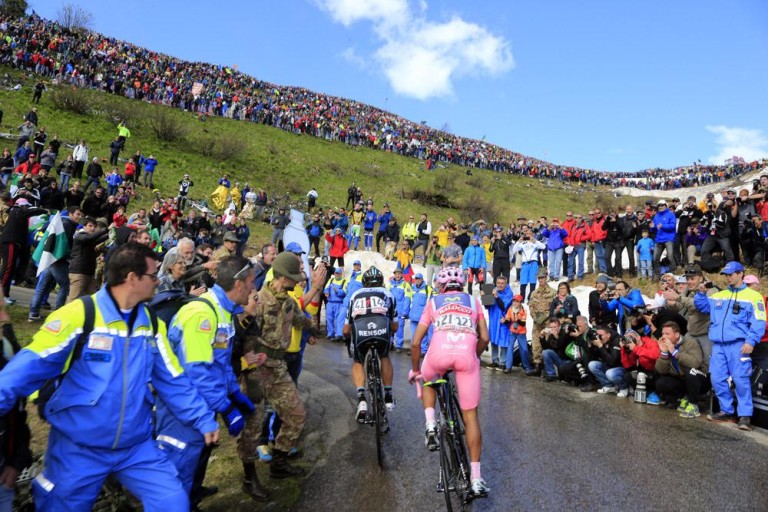 This was the stage all the riders feared most on this year’s race. The Monte Zoncolan climb was only first used in the Giro back in 2003 but instantly became an icon. What it lacks in length (10.1kms) it more than makes up in steepness at an average of nearly 12% with some parts reaching 22%. It is so steep that cars are not allowed meaning officials and team personnel have to take to motorbikes to stay with riders. The riders themselves also have to use very low gearing and you will see lots of long cage rear mechs and soup plate size cassettes to cope with the steepness. The fans love it though and there are literally thousands at the top of the narrow climb with lots of army and officials having to stand with arms linked at the roadside to allow the riders space to go through.

Spare a thought for third place on the stage Francesco Bongiorno (Bardiani-CSF) who was pushed by a spectator into the back wheel of eventual stage winner Michael Rogers (Tinkoff-Saxo) a few kms from the top causing him to unclip on one of the steepest parts of the climb and never recovered from it. 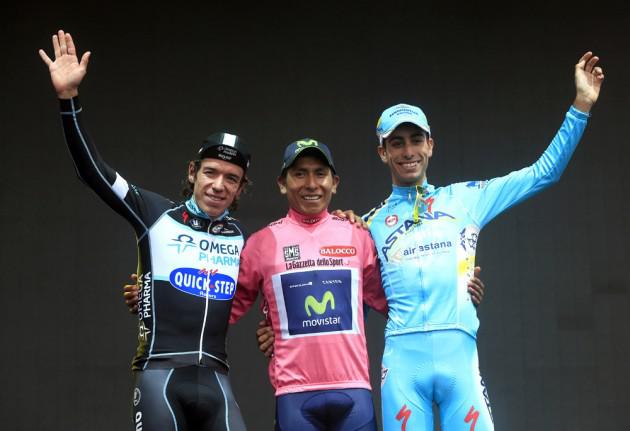 Youngsters on the podium.

The 2014 Giro D’Italia is Nairo Quintana’s first Grand Tour win. We say first because he is only 24 years old and we expect him to repeat the feat in many more three week races. His stats already speak for themselves; second in the 2013 Tour de France in his first attempt and first in this year’s Giro in his first time at the race. Unfortunately it is too much to expect to see him at this year’s Tour de France but the Tour of Spain later in the year must surely be a target. Roll on the 2015 Tour de France where he is bound to be a favourite.

In fact the final overall podium from this year’s race signals a new crop of young GC contenders as second place Rigoberto Uran (Omega Pharma-Quickstep) is 27 and Fabio Aru (Astana) is only 23!