Although the world and his wife saw the leaked Giro d’Italia route last week, I thought we should play it straight and only blog about the route on the actual launch day. Ok, so the route is pretty well known to everyone now, so instead lets take a closer look at the ‘Big Start’, which will be in Belfast in 2014. 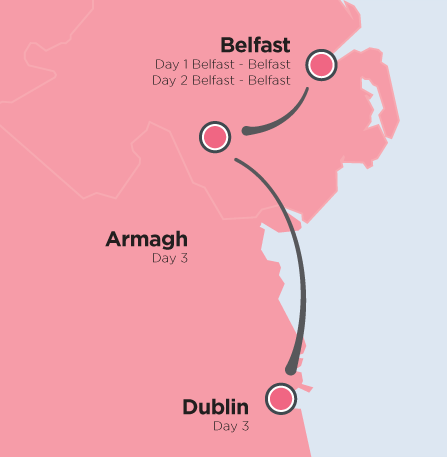 The Giro will start in Belfast on Friday 9th May, Day 1 starting in the historic Titanic Quarter. 21.7km later the stage finishes at Belfast City Hall. A fantastic spectacle for everyone watching, as the Team whip through the streets in the Team Time Trial.

Day 2 is a flat stage, 218km again starting in the Titanic Quarter, but this time ending at the… no wait… This time ending at Belfast City Hall again! The lucky people of Belfast are certainly in for entertainment over these two days!

Day 3, or rather Stage 3 – I’m going to use the correct terminology – see the riders start in the Titanic… just joking! This time we start at The Mall in Armargh and wend our way through 187km of riding to finish the stage in Dublin City Centre.

Thankfully the organisers saw sense to put a rest day after stage 3, so the riders, team principles, support staff and equipment can hot foot it over to Italy (Giovinazzo, a port city on the Adriatic coast in the region of Apulia, Southern Italy to be a bit more precise) while fighting off the attention of the press and what not in a slightly more relaxed manner.

So thanks to the hard work of various parties and the Tourist Boards of Northern Ireland and Ireland, the Grand Partenza and the opening stages will be from Belfast to Dublin. We’re hoping for a bit more insider info from our man on the ground (who may be on the ground a little later this year) with his inside info – originally hailing from the Northern part of the Island. We’ll be looking to get some inside views from cycling enthusiasts over there in Belfast, and a bit more of an idea on the route and what to expect in terms of little nuances on the course.

One thing is for sure, given the fabulous heritage cycling has there, the Giro will be hugely well supported. Cheering on local riders, or just supporting their favourite teams, the welcome is sure to be warm and the atmosphere electric. 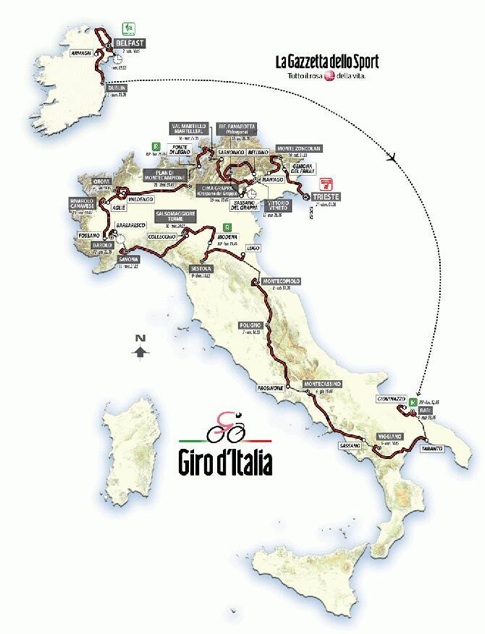 For 426.7km the Giro d’Italia will be the Giro d’Ireland (Giro d’Irlanda, or Giro d’Irlanda del Nord or Giro d’Italia del Nord and then the Giro d’Irlanda). A firm fix of Grand Tour action. For those in England/Scotland/Wales/Other, jealous of the Grand Partenza, flights to the Belfast and Dublin are very reasonable (although I’d book in advance and give it a few days before the event to have a look around as sample some of the local delights). Or you can wait for the Grand Depart of the Tour de France, which visits sunny Yorkshire in July 2014! personally, I’m tempted to do both 🙂 – just need to wangle a work angle and get it done on expenses (on a flying pig, across a frozen hell, whilst delivering Lord Admiral Horatio Nelson his eye back).

Anyway, I better stop before I get sacked.

As I’ve said, it will be an amazing spectacle and more than likely once in a lifetime (neither event will likely be back in the next few years I imagine), so get down there if you can and have a great time if you do.