AKA the purple anodising special edition. Also features several sets of affordable eyewear and a brief discussion on how best to wear bib braces if you’re a woman. 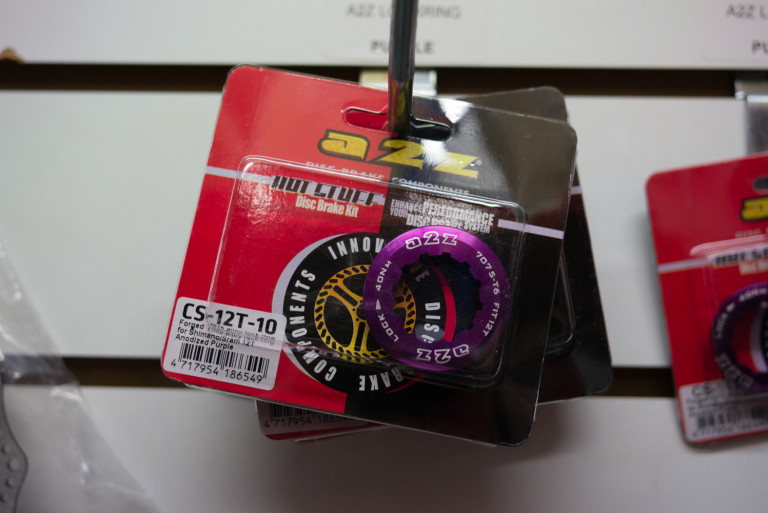 The only thing better than pointless anodising is purple pointless anodising! Who doesn’t what a discreet splash of purple on the end of their freehub? Also available in blue, gold, green, orange, pink and red. And black, grey or silver if you’re boring/sensible. 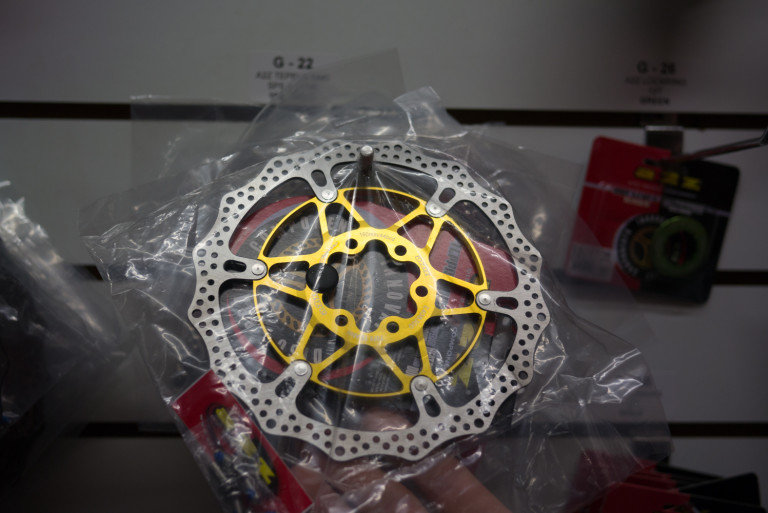 “Teppanyaki is a style of Japanese cuisine that uses an iron griddle to cook food. The word teppanyaki is derived from teppan, which means iron plate, and yaki, which means grilled, broiled, or pan-fried. In Japan, teppanyaki refers to dishes cooked using an iron plate, including steak, shrimp, okonomiyaki, yakisoba, and monjayaki.” – Wikipedia A new brand for Merlin and a fairly new brand in general, Astute are 100% Italian. 100% handmade. 100% innovative. That is the Astute way. They are the latest brand to join in the fray with manufacturing super high end saddles. They ain’t cheap. It’s best to read about the products BEFORE looking at the price tags! 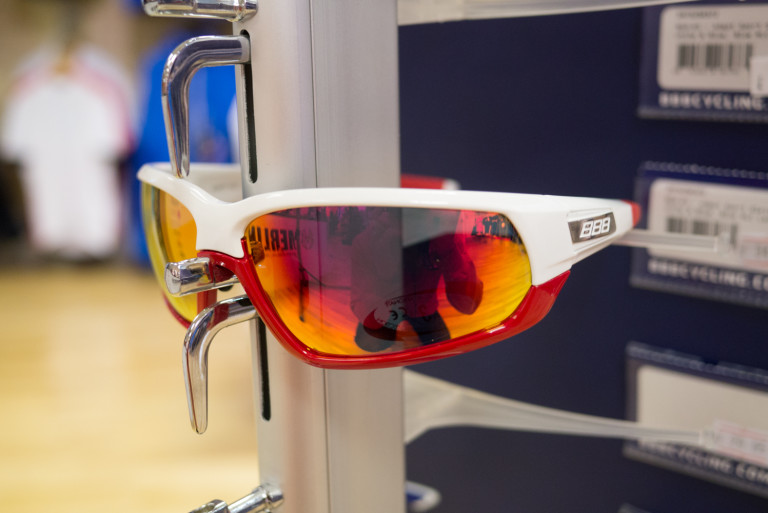 How to find us

We’re running a few Open Evenings during the summer months. Kinda like trade shows that the general public can come along to. Interesting talks, shiny new products, prototypes, freebies, competitions and a good old chinwag to Sales Reps who really know their products inside out. 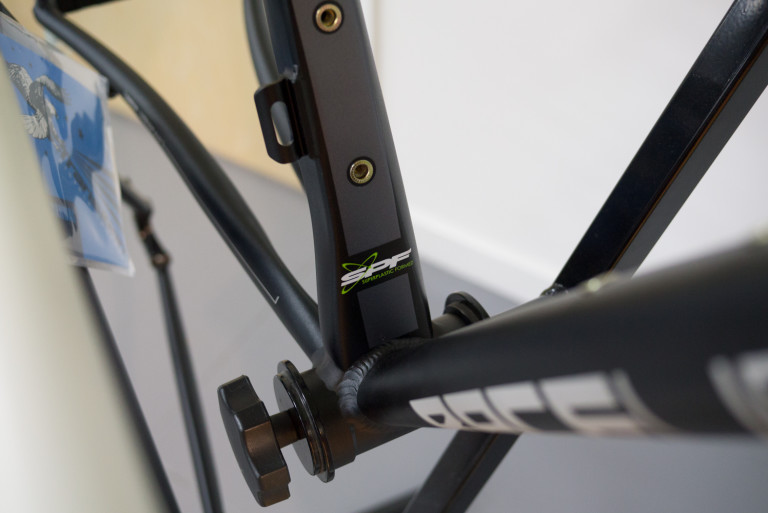 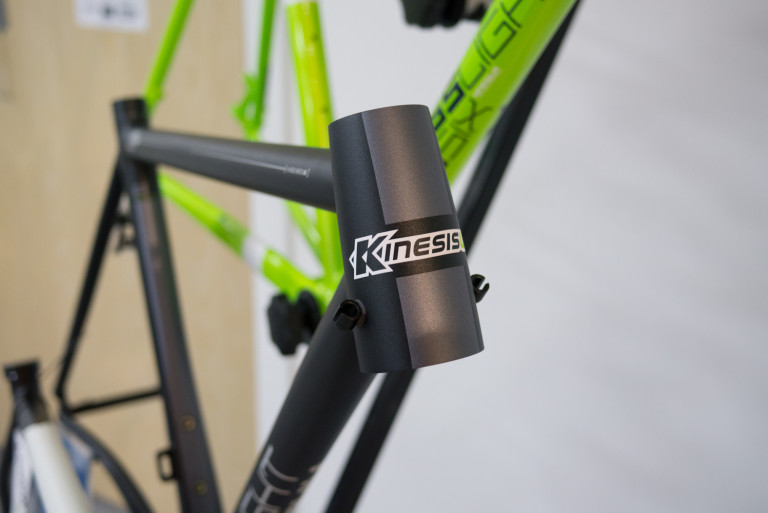 “We have put everything we have learned during over 12 years of alloy frame design and manufacture into this completely new and very advanced, alloy road frame.” That’s what Kinesis say about their new Aithein. We’ve yet to build one up into a complete bike yet but the frames certainly look the business. This pretty much needs no caption. The most eagerly awaited re-stock bike in our entire 22 year history. 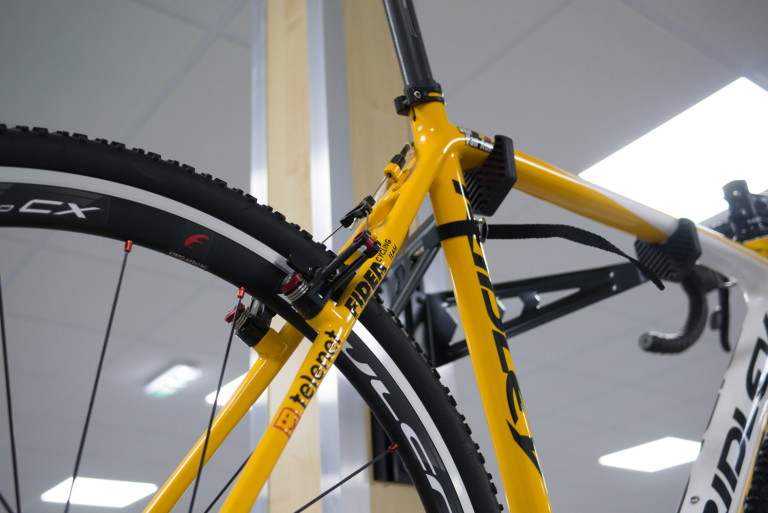 There are still a handful of these carbon cx bikes once ridden by the Telenet Fidea team. They have been used for races and as such have chips, scratches etc. The crank arms are scuffed but overall the bikes are good. The frames are still fully warranted by Ridley. We can take pictures of individual bikes to show you its exact condition on request. If you require a top of the range cross bike to race on these are ideal.

Is this the last Merlin Single Malt? It could well be you know. If you fit a 59cm bike – your luck’s in. 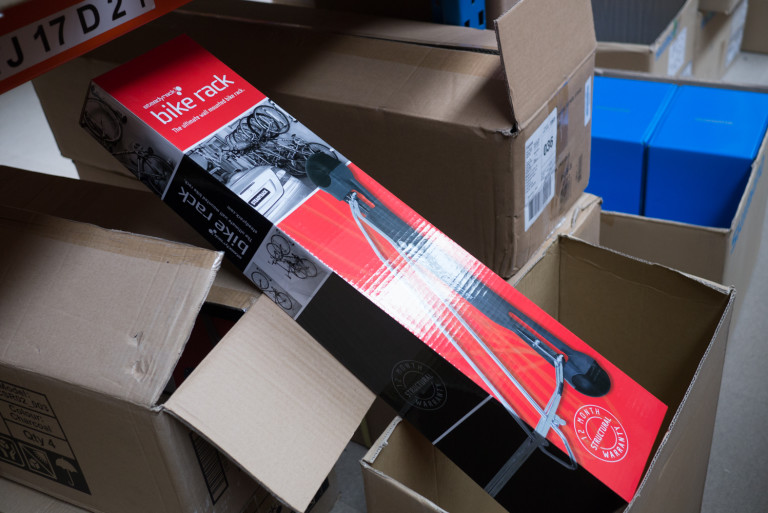 This is a really poor picture of a really nice product. Go to the product page to see a better pic of it. The Steadyrack is a fold-up wall-mounted holder for your bicycle. Great if you don’t have much space for your bike. Or if you have loads of space but also have a shedload of bikes. The fastest gravity tyre. For the first time, Schwalbe brought a “real” semi-slick to the Gravity and Enduro scenes. It’s a very interesting option especially on the rear wheel and for very fast trails. There is no better Enduro tyre for low rolling resistance than the Rock Razor. The RockShox Pike may be the fork that getting all the attention these days but we still have a sneaky fondness for the aesthetics of a Bomber. Wet gloss white. Crisply machined dials. Muscley looking fork arch. ‘Espresso’ coating on the stanchions. Classic red decals on the lowers. And the performance of the fork is pretty fab too. 110-140mm adjustable travel with Marzocchi’s famous TST Micro damping adjustability. Not new in this week but we thought we’d include some ORICA GreenEDGE stuff to celebrate their decent start to this year’s Giro d’Italia. ORICA GreenEDGE are proving to be one of the most popular teams with cycling fans. 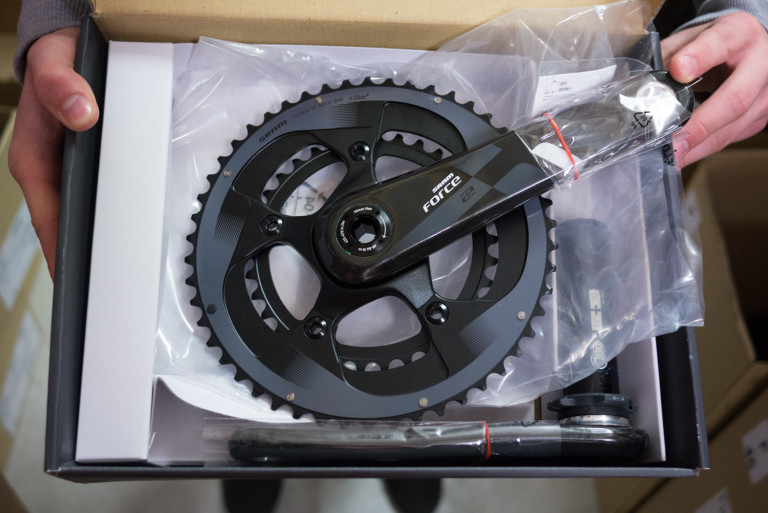 The Force 22 crankset has unidirectional carbon in the crank arm matched to a forged alloy spider. The hidden bolt pattern makes better use of carbon fibre to improve stiffness and shed weight. It comes in fullsize and compact ratios and in multiple crank arm lengths. This tape is thickly padded for the pounding you’d expect from CX. It also features a cross-hatch pattern for extra grip. And it has ‘Service Course’ embossed along its length. It’s a brave/silly/wealthy person who opts to use white bar tape on a cyclocross bike, mind. You can, of course, just use this CX bar tape on a non-cyclocross bike (a touring bike, for example) to give it a bit more cush. Minimalist multi tool from Lezyne. 3, 4, 5 and 6mm Allen keys and a Philips-head screwdriver. That’s it. Paired with a separate chain tool, this could actually be a really decent repair setup. Purchasing a couple of tools so that you can get the cassette on and off your bike yourself is the first step on the road to becoming a self-sufficient home mechanic. Get yourself this £10 combo and you’ll never look back – or pay as much for bike shop repair bills – ever again. 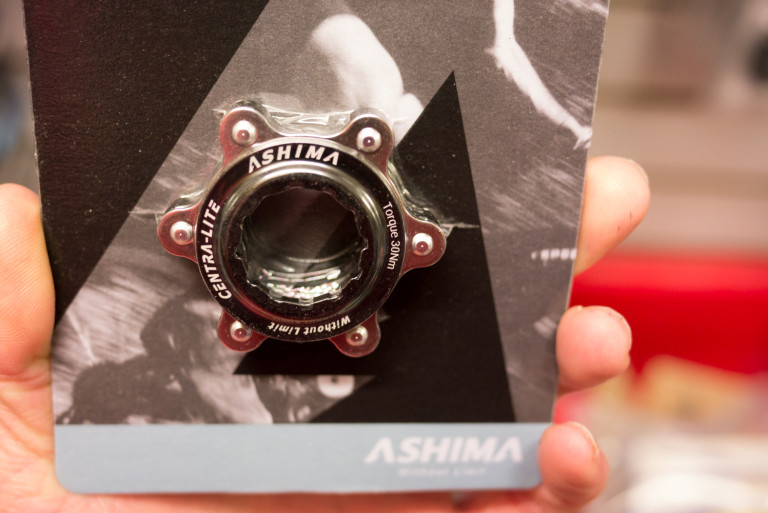 If you have some Shimano or DT hubs that come with spline-fitting for the rotors but you want to put some ‘normal’ 6-bolt rotors on there – this is the thingummybob for you. This Ashima one is a particularly nice example as it doesn’t weigh half a metric tonne like most other converters seem to! 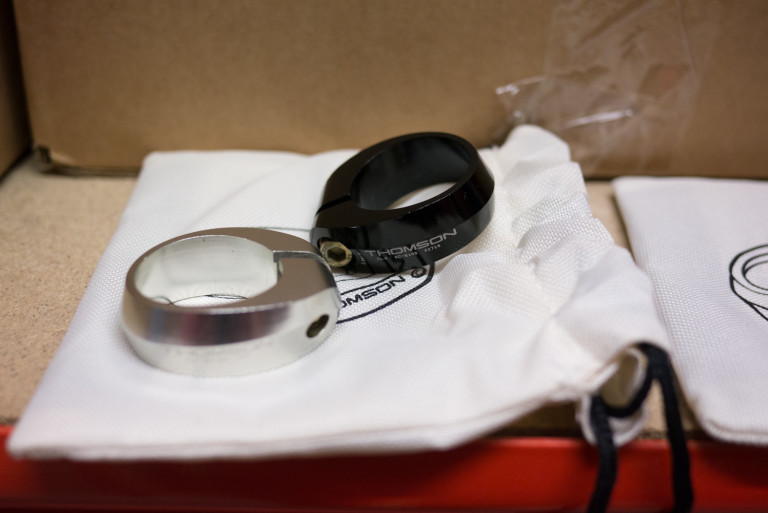 Spot the camera man. Here’s another set of decent cycling sunnies at a good price. Three lenses included: smoke, orange and clear. Available in white or black colourways as well as this flouro yellow set. 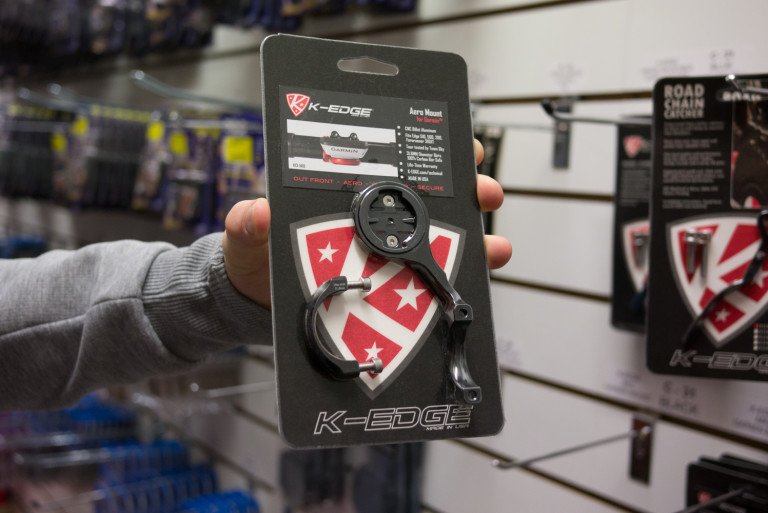 Developed for Team SKY who requested a more aerodynamic mount. The goal was to place the Garmin Edge 510 computer as close to the handlebar as possible, and have an aerodynamic leading edge. By combining these updates with the ideal position out-front, centered and flush with the top of the handlebars, K-Edge thought they’d call it the aero mount. Fair enough. 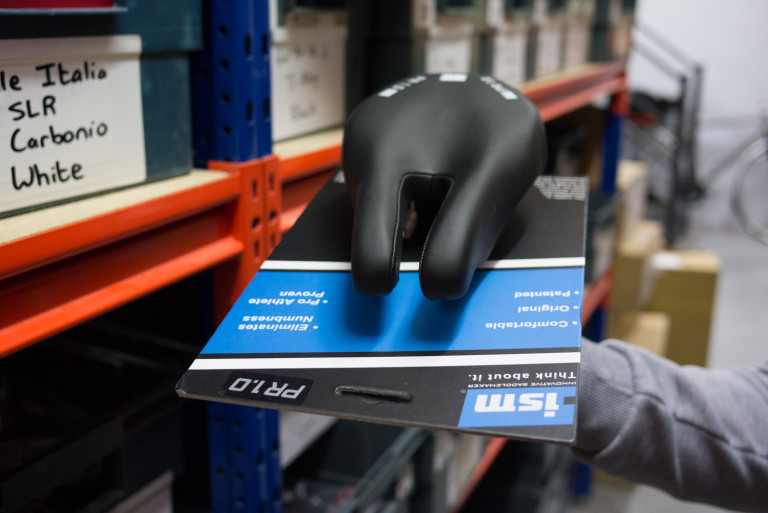 Double-ended. If you want to have to endlessly explain your saddle to people then get one of these. Similarly, if you really suffer from discomfort and numbness, try one of these.