It’s Thursday so it must be time for us to delve around the shop and the stock room to see what bright and/or shiny new things we’ve had arrive in to us since last week. 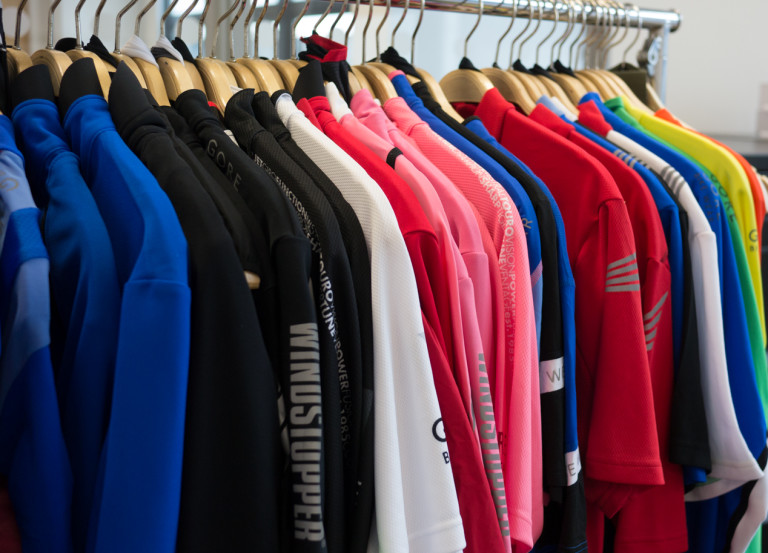 Kicking off this week’s Goods In is a rail of Gore Bike Wear clothing that won’t be available until Autumn. We’re not allowed to tell you much about it yet (or we could legally be shot) so all we can do is show you this glimpse of a bit of the range. rest assured there’s no massive changes; Gore are the masters of technical fabric so they don’t need to chase their tails with gimmicks. Their stuff speaks for itself. Just a quickie, a short sleeve jersey made entirely of Gore Windstopper. I wonder what iconic rival product this might be being lined up to go against? Hmmm… 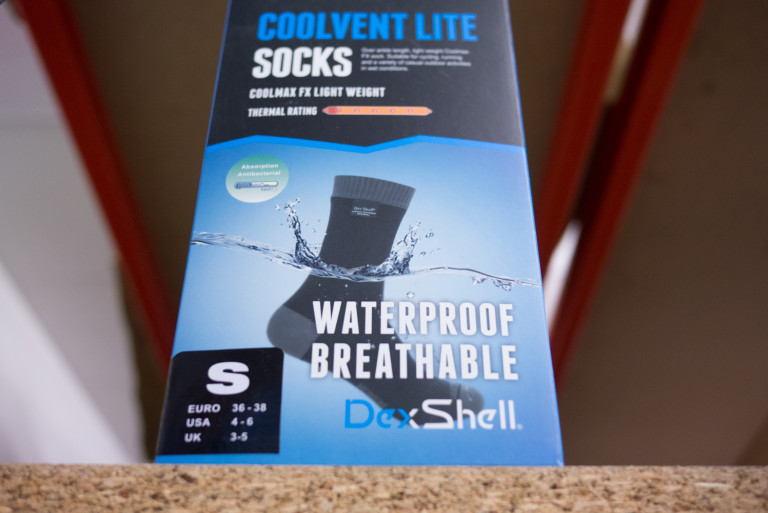 Waterproof over-the-ankle sock. Highly breathable with an anti-bacterial treatment. Something of a cheaper alternative to the more established brand. With the Great British summer upon us (ha!) it’s time to switch to a less thermal, more breathable sort of waterproof sock. Our European and American friends must be baffled. Selfie alert! We only ever really got these T-shirts in for staff members and maybe to give away as prizes now and again… but people have been buying ’em! So we had to put another order in and get some more put into stock. Aww shucks guys. 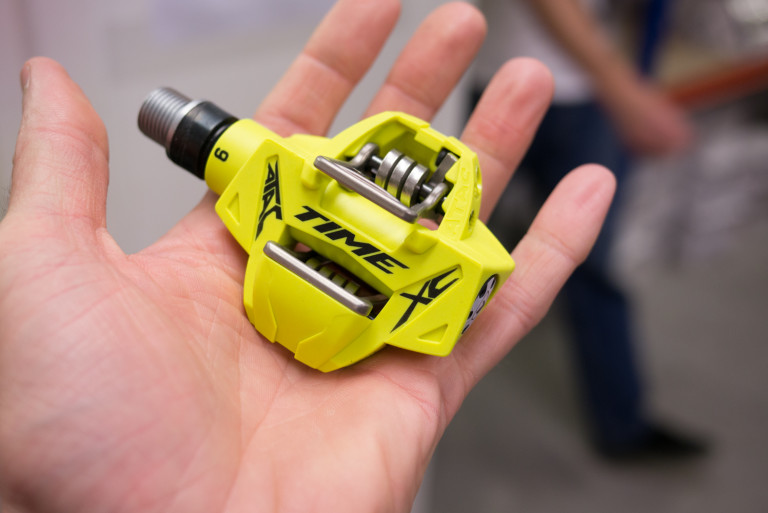 The vast majority of mountain bikers use Shimano pedals but there are a hardcore cult of Time users still out there who appreciate the larger degree of float and the unrivalled mud abilities of the Atac design. We have Atac XC6 pedals in white or this yellow version that looks like someone’s been bored at the factory and has coloured in with a yellow highlighter pen – in a good way. 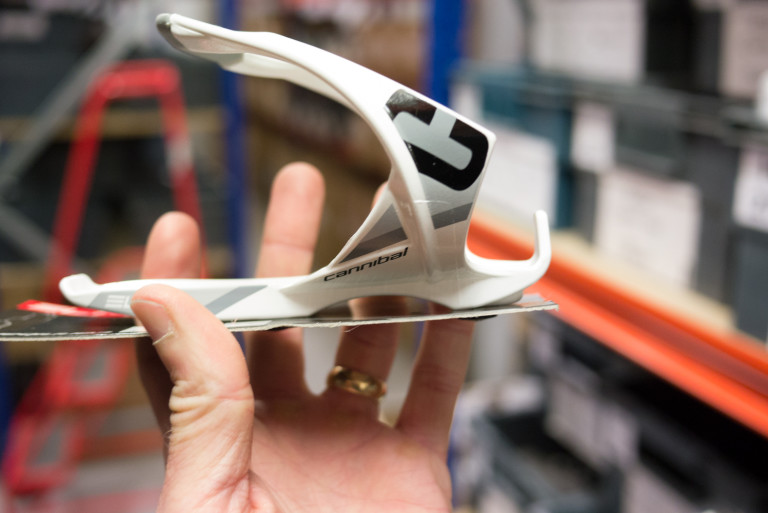 It was Eddie Merckx’s 70th birthday the other day, so here’s a product that bears his nickname. Happy birthday Eddie! If you’ve never tried an Elite cage, you probably should. They kinda make you wonder why you ever put up with tubular metal cages. Easy in, super secure, tolerant of clumsy grab-outs, light. 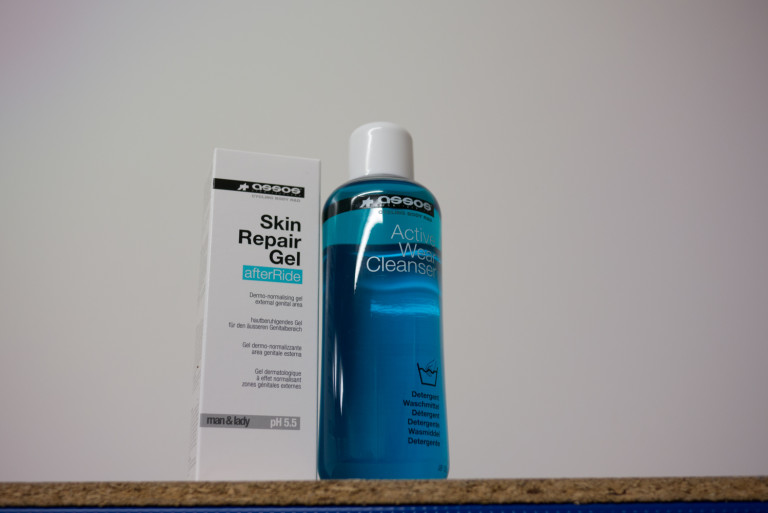 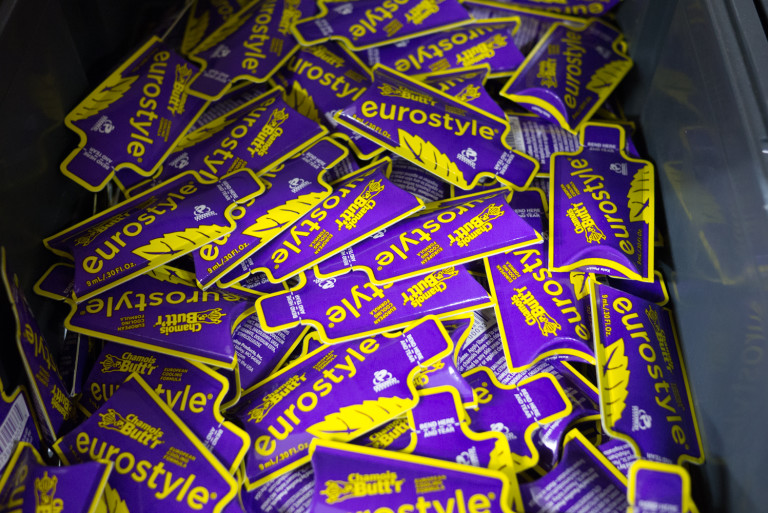 Yet more pants paste. We keep these little sachets of chamois cream on our counter near the till and they fly out. They’re certainly a good conversation starter. Everyone loves a good ‘box shot’ don’t they? It took a while to grow on us but now we’ve got used to it – and are seeing it on bikes – we’re starting to really dig the new look XTR stuff. There was never any doubt about its function. XTR is always amazing. 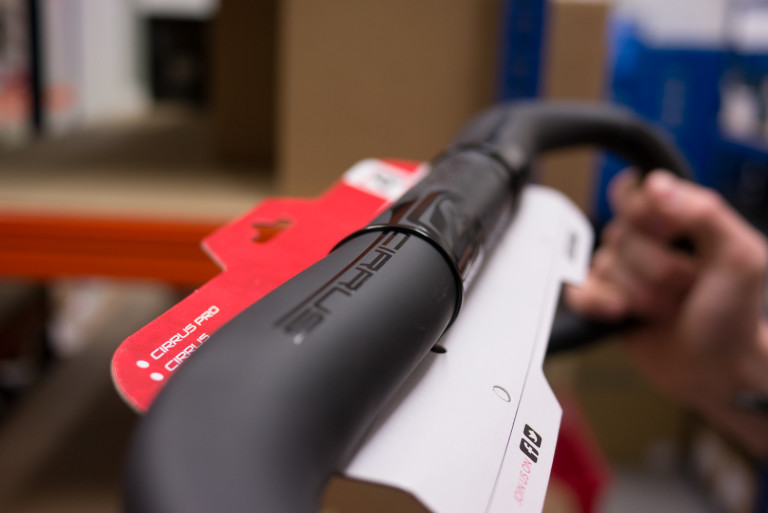 Developed with some serious riding in mind with a 130mm drop that instigates a lower riding position. The 80mm reach is perfect for riders that spend considerable time on the brake hoods – comfortable, yet highly efficient. 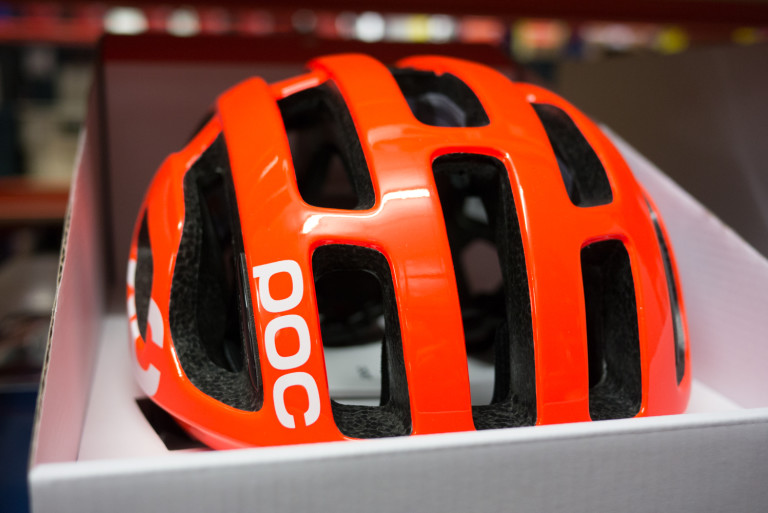 Are you a fan of the POC style or not? There seems to be a bit of a split developing in the road cycling world where some people love the distinctive look of POC stuff (and some of the wild Kask stuff too) but other folk are left baffled by it all. Which side are you on? Somehow we’ve never had a Sensa Calabria Ultegra built up and on display in the showroom before. Well, not a non-Di2 Ultegra version anyway. To my mind this is the best looking Sensa of the whole 2015 range. It’s quite a bold-looking bike but it works. Some aero-bikes go a bit too extreme and start to resemble ugly triathlon bikes but the Calabria has enough a flowing look to it that it manages to escape the ugly aero bike tag. 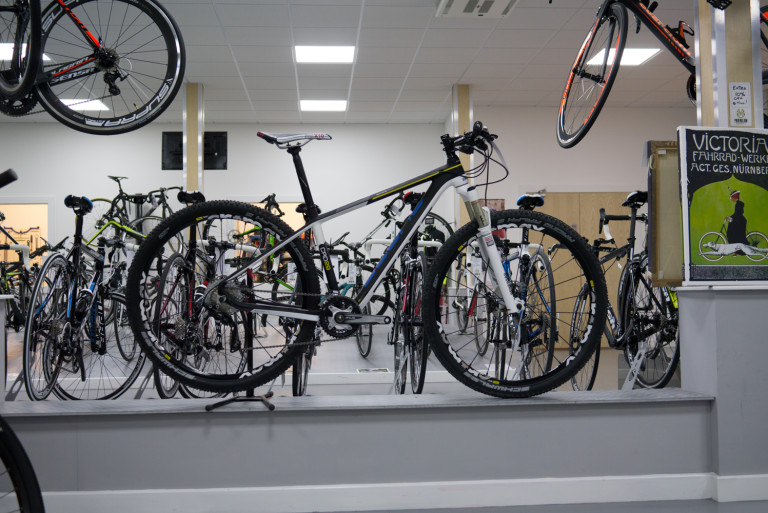 A carbon 29er hardtail decked out with decent Shimano and Rockshox bits for £1,349 – what’s not to like? Apart from the fact that we only have them available in 17″, that is. Still, a whole load of people will fit a 17″ just fine. Drop us a line or pop into our store and we’ll tell you a bit more about this bargain bike. We didn’t mention our new range of road bikes last week, so excuse us while we spend a few moments blathering on about them. The top of the new range is the Ultegra Di2 Cordite – a racy all-carbon affair with a beautiful gloss white finish. This is an obscure view of the underside of the down tube and bottom bracket junction. Just because we thought it looked cool and was a great indication of the high levels of finish on the frame itself. The ROC is the secret star of the new Merlin bike range. An impressively high tech aluminium frame with hydroformed tubes, internally routed cabling and a tapered head tube paired with a full carbon fork and a full Shimano 105 groupset. Rolling on a pair of quality Fulcrum wheels and nice 25mm folding bead Conti tyres, the ROC is ready to er… rock.

Here are few more pics of the ROC. 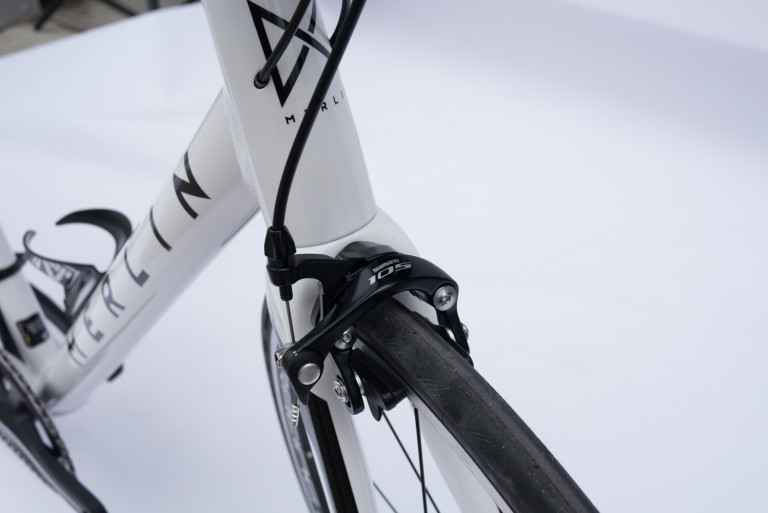 The Fuse has been the model that’s had the most immediate interest. Which is not entirely surprising; any carbon bike under £1000 is always popular. The Fuse has a full carbon fork and a Shimano 105 drivetrain so it’s even more appealing. It’s the ride character of the Fuse that is going to keep people smiling long after they’ve left the shop. A very modern road bike that’s light, efficient and comfortable.