I have always found October one of the most mixed-up months of the year in a riding sense. Should you be backing off and starting to enjoy more social rides? Or do you try and keep it going as long as possible before winter starts? And that’s not before considering the changeable weather.

For me personally, I’ve usually switched off by this stage of the year but one of my favourite events is the three day Tour of Menorca sportive at the end of the October which always forces me to keep doing some sort of training so as to not struggle at the event.

The warm sunshine and great riding make it an excellent way to end the season so for the past five years my Octobers have been even more at odds as I could do with a rest but need to keep going. With this in mind I’d ridden about once a week for three weeks in September so had to do something.

To help with motivation I entered the Cycling Weekly Box Hill sportive as it’s close to home and I had a lot of friends riding.

I knew the course wasn’t too difficult so figured it would be a good day out with friends in a relaxed atmosphere which would make it easier to get out of bed early for.

What I didn’t count on was time trial ace Michael Hutchinson and Olympic legend Sir Chris Hoy also riding in my group on the short route!

What started out as a nice steady pace soon hotted up as we hit the Surrey Hills and anyone who says Hoy can’t climb has obviously never ridden with him.

He still looks so good on a bike and although leaner now he’s still a mass of muscle.

Needless to say I missed the run-in to the finish where Hutch and Hoy were having fun but at least I got some dry miles in in the sunshine.

Despite getting shelled on the climbs I was pleased with my condition considering how little riding I’d done and had several very long work weeks leading up to the sportive including the last week with no riding whatsoever.

To capitalise on this I then went on holiday for a week – with no bike – so the weekend just gone was a baptism of fire, again. 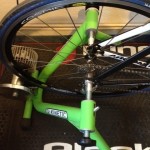 Oh how I’ve missed you…

I thought I should at least do three consecutive days riding in training for next week in Menorca so the turbo trainer was brought out of storage for a spin on Saturday.

It’s funny how you forget how long an hour on the turbo feels like and the amount you sweat but it quickly comes back to you.

A several-hours-long spin on Sunday was conducted at a leisurely pace where I had to keep reminding myself that it wasn’t about speed or distance just getting a few hours in without blowing, funny how you have to remind yourself about that after pushing most of the year. 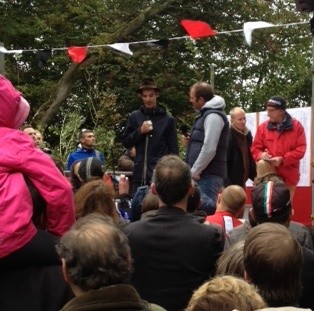 Sunday afternoon was spent watching others suffer at the Bec CC hill climb which also doubled as David Millar (Garmin-Sharp) riding his last ever race as a professional cyclist.

Hundreds of people came out to test themselves against him and many times more had come to watch.

So much so that the top of the course resembled an alpine climb with spectators narrowing the road down to a few feet in places.

A wall of sound greeted each rider but Millar was definitely the crowd favourite.

Unfortunately the crowd didn’t help him win and he finished in 21st place in his first and last ever hill climb.

It was fitting he chose a club event to end his career and it was very much appreciated by the large crowd who waited in the rain while he said a few words on the podium before handing out the prizes.

Apparently there are a few Cervelo S5 (this is an old post and the linked content no longer exists) and S3 bikes going on eBay soon.