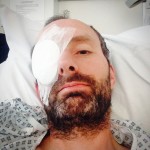 If there’s nothing better than riding a bike then there’s nothing worse than not being able to ride a bike. Being divorced – or temporarily separated – from your bike through an injury is a very frustrating thing. But there are ways of coping.

I recently had en enforced break from cycling. Injuries that keep you off the bike are usually caused when you are on the bike. Crashing in other words. I didn’t crash.

Basically my eye decided to go a bit weird and needed a surgeon to do something to it whilst I was blissfully knocked out by anaesthetic.

Now then, I wasn’t off my bike for long (about four weeks I think) but it was still long enough to encounter the problem of “what the heck do I do to fill my spare time?”

The first week of my time off the bike was spent on holiday (squinting on the beach) so that wasn’t too bad. It was Week 2 where the itch to pedal kicked in properly. I did very nearly ignore the Doctor’s orders. I very nearly went for a ride. I half-convinced myself that I’d just go for a “gentle pootle”. Thankfully my worry gene piped up and made me contemplate what would happen if… er, something happened.

I put the shed door key back on the hook and opened a bottle of beer to be miserable with.

Alcoholism is certainly one way of passing the time when you’re injured but it’s probably not one I’d recommend. So what sort of things can you fill your hours with should you find yourself temporarily incapacitated?

Think about what bike you’d buy next. Carbon or not carbon? Disc or not disc? Drop bar or flat bar? 29er or 27.5? Hardtail of full suspension? Black or blue? At one point I had a short list of about ten bikes. In the end it made me more determined than ever to get a new bike but less certain than ever about which one! Still, it’s nice to dream isn’t it?

I’d been riding around a bike with a fork that clearly – desperately – needed servicing. A creaky, notchy, sticky fork that was incredibly annoying whilst climbing and deeply underwhelming whilst descending. So I investigated how I could service it. Turns out it was really rather simple. No weird tools required just a little tub of suspension fluid. Ten minutes later – oh alright then – half an hour later my fork was pretty much as good as new.

Now then. I didn’t do this. Things never got that bad. But if you’re off for a longer period of time – and your injury allows you to do a bit of static cycling – then you can get a yourself of cycling fix from a turbo trainer.

I used to frequent bike forums all the time, every day. I don’t so much anymore (mainly due to the rise of social networks and my preference for them) but while I was off I thought I’d “check in” to a few forums to see what goes on on them these days. It was pretty much the same stuff as ever. Anyway, I ended up seeking out posts where I could help people out. Technical questions, where to ride questions, general advice. It felt nice to help.

The allure of eBay. I didn’t want an early 1980s French road bike but then I found myself bidding on one. I missed out on it. So I had a look at what else was in the Vintage Cycling category. Oh lord help me. I still have some saved searches in operation. “Hey, maybe I’d actually ride it” or “I could sell it on for a massive profit”. Knowing deep down that neither of these statements would ever happen.

I used to have the time to do a few different pastimes. Work and family takes up a lot of my time and I choose to fill my spare time with my One True Love – cycling. With cycling put on hold I dug out some film and some vinyl. Cameras and music used to consume even more of my income than bikes did. I think this rekindling of old flames is the best thing to have come out of my injury. My bank balance may not agree but – as great as cycling is – it feels great to be into a couple more things again.

I’m sure there will be some of you reading this who have been off your bike for a lot longer than I was. If you have any advice then please leave a comment below.