The New Year started with a period of reflection for me and was quickly kick-started into action when I was invited to attend a Paralympic Rio Potentials Camp held at Bath Uni in early January.

This was a fantastic opportunity to get into a multi-sport environment for the first time and be around lots of other athletes. 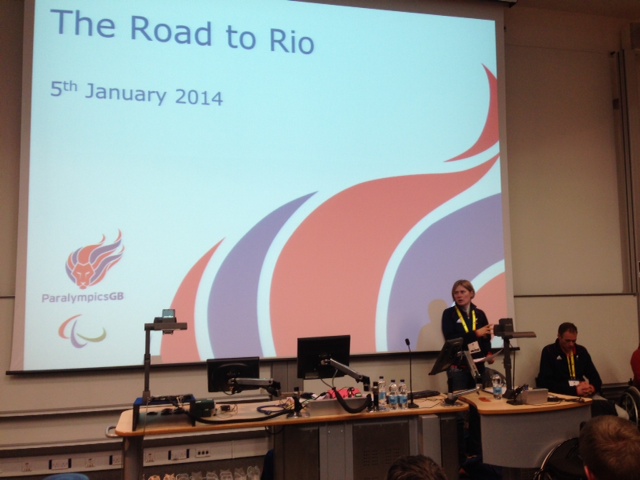 Food halls and facilities were similar to that of an Olympic/ Paralympic village. There were several presentations from past medallists such Dave Smith MBE – who is now my para-cycling teammate and an inspiration. This helped to give me a much clearer picture of the effort, determination and discipline that is needed to get to the very top.

It was also good to get an idea of the enormity of the games in terms of scale. Did you know, for example, that there were 300 Paralympic GB athletes at London 2012 and that was without all of the support staff or other countries that were involved?

I got to understand about the external influences at the games that can distract or effect performance things like media and crowds or just the different foods available or general entertainment that isn’t there at a normal world cycling event. The Rio Camp was a very exciting place to be and helped me clearly focus on dreaming big in 2014 and beyond.

The Para-cycling Development Team and I went on from the Rio Potentials Camp to a training camp with a full squad which was pretty hardcore. This involved daily sessions morning and afternoon with a total of 14 hours on the bike over 4 and a half days. The highlight of the week for me was absolutely smashing it up Cheddar Gorge riding huge gears for 2 mins, then switching to very low gears for 2 mins.  Loved it!

Part of my time back with the Team was to also get to grips with my targets for the year. A new target set by the GB coaches is to establish myself in Time Trial or TT racing and become the National Champ, so I’m looking forward to getting stuck into that one as it has always been something that I have thought would suit my riding style, especially the shorter distance races.

My main priority since the training camps in January has been to get those base miles on the clock, and to also start to consider the race season calendar which will start in March. Getting a cold has stopped me short of achieving the 1000 base miles that I wanted for January, but I have still managed 800ish which should stand me in good stead for the coming months.