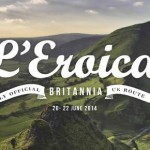 L’Eroica Britannia takes place in Bakewell, Derbyshire this weekend (20-22 June) and to say that those going are looking forward to it would be a massive understatement.

The event is only open to bikes pre 1987 so for months now people have been buying, tinkering, fettling, polishing and borrowing kit in time for this weekend.

You can also bet a lot of entrants have just realised last weekend that all the above tasks that they were supposed to have done by now have not been completed so the next few days will be frantic as they try to get their machines ready.

In my last post I was debating which bike to use, a Vitus 979 in Sean Kelly’s KAS team livery from 1986 or a 1940’s BSA race frame that was solid but tatty and could be rush built for this year at least. Well having looked into the event in much greater detail, it really is a celebration of all things British and so it seems logical that a British bike should be used. Thing is I’ve moved away from the BSA frame to another one, a VERY different one. 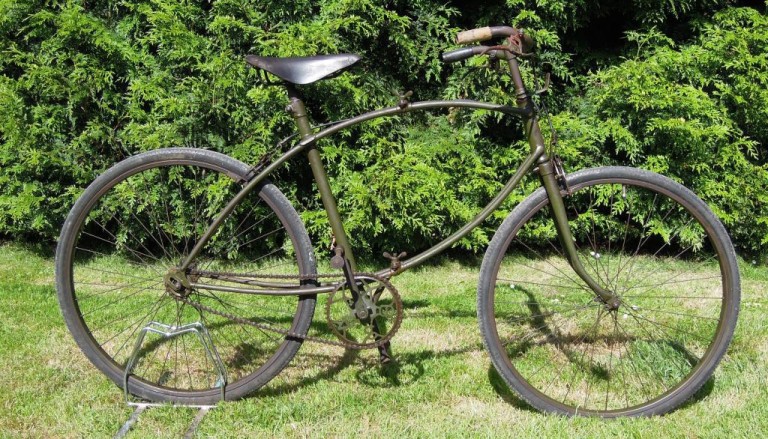 The bike I’ll be riding the 2014 L’Eroica Britannia on will be a 1940’s WW2 era BSA Airborne bike more commonly known as a Parabike.

This bike was originally designed for use by airborne soldiers to parachute out of planes with. It’s a full size bike which folds in two, handlebars turn and pedals slide inwards so is flat, and was supposed to be strapped to their body as they jumped.

Thankfully for them, the bike does weigh a fair bit, they never jumped with them as developments in gliders and planes allowed bigger transport options to be used.

The bikes ended up being used by troops landing ashore on D-Day and by tank crews who strapped them to the tanks and used them as runabouts when at rest.

Around 70,000 were made between 1942-45 primarily for military use but BSA was allowed to sell them to the public also, see the CTC Gazette advert from 1944 below. After the war they became surplus and were sold off for very little by the army to the public. They are now quite rare and to find one in original condition with original parts is very rare. 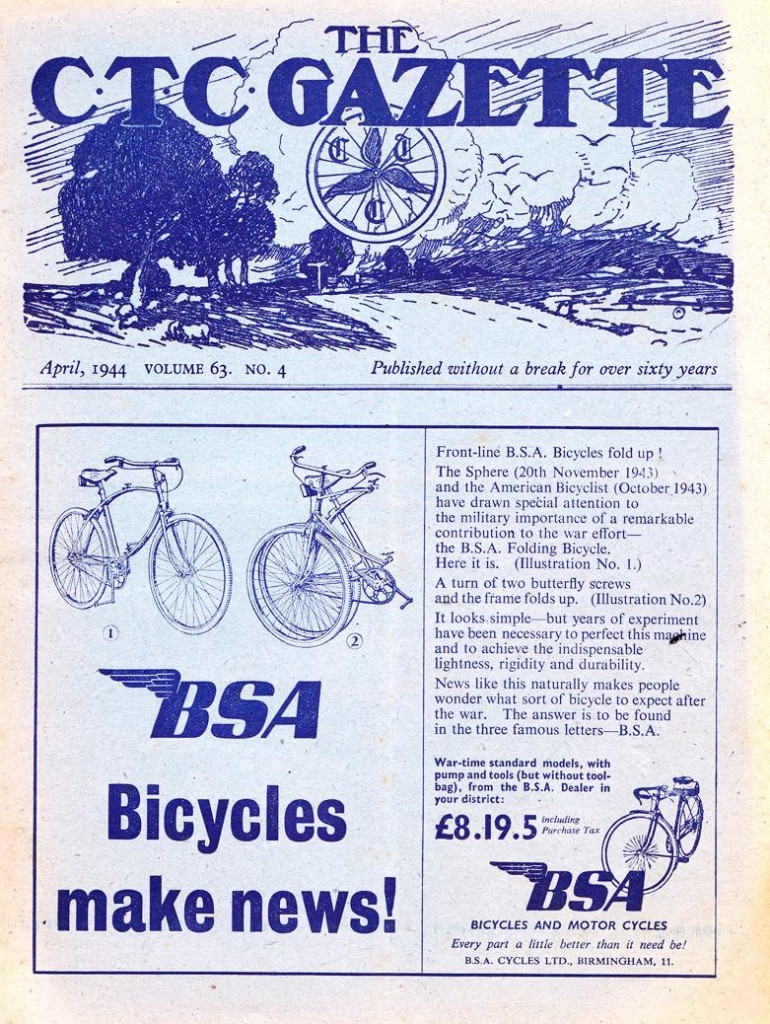 The bike is a single speed but not fixed and has front and rear centre pull brakes. The frame has hinges in the centre of the top and down tubes which allow it to fold. The handlebars also fold inwards by loosening the nut on the stem. The neatest idea is the pedals which push inwards making the bike flat when folded and preventing them sticking out and catching anything.

The saddle unfortunately isn’t an original but is near enough and at least it’s well broken in. Tyres are a standard 26 x 1 3/8 so are easy to replace, original wartime ones are still about but are so fragile you can’t ride on them. I’ll also have new reproduction grips fitted by Sunday, hopefully…

The bike will be on display on the CTC stand at the festival over the weekend so drop by and have a look if you are there. 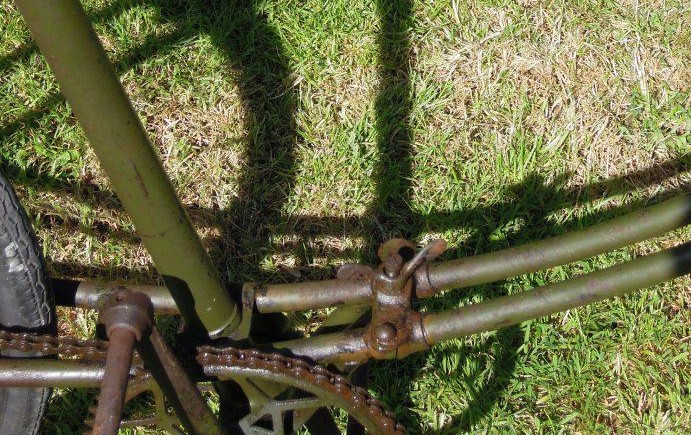 Hinges allow the frame to fold 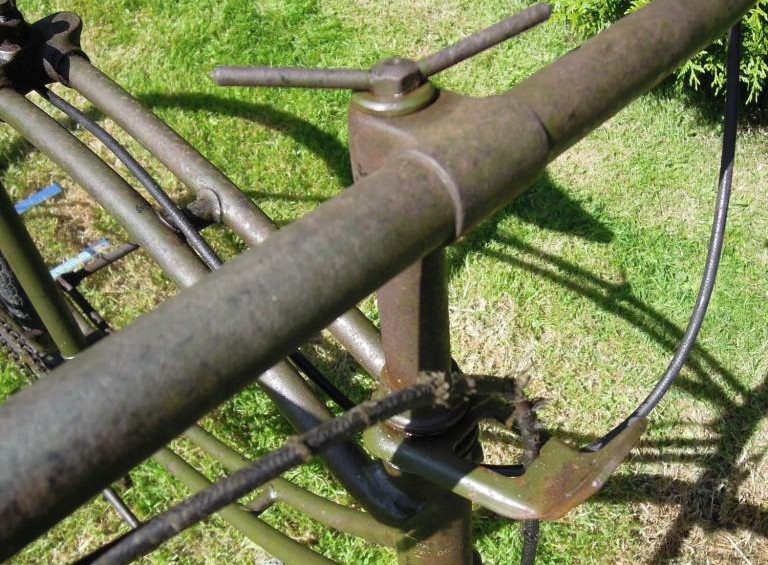 Loosen the nut and the bars fold. 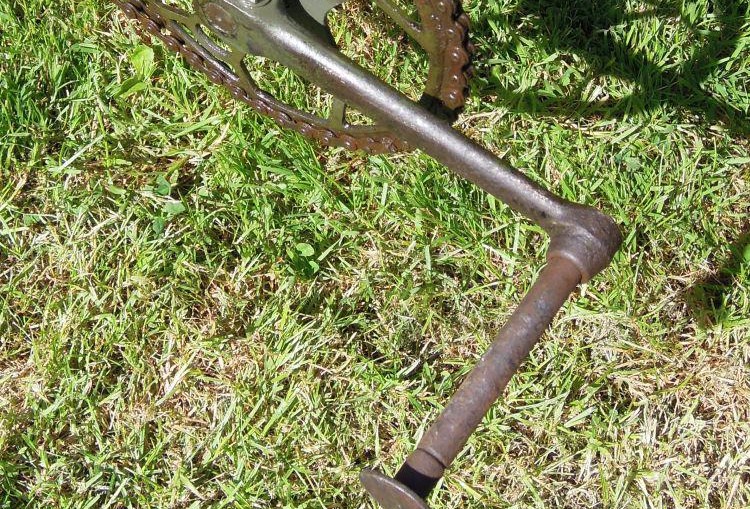 As the bike is not the easiest to ride I’ll be doing the 30 mile route at the weekend and thankfully the organisers have kept this one relatively flat with no big hills.

I’m riding this bike mainly because I was bet I couldn’t get round on it and part of that bet is to do it in full WW2 British army uniform so if you see me out on the road give me a shout as I’ll definitely be going slow enough to hear you.

I’ll let you know how I get on next week, wish me luck!

Paddy may wish to have a look at our range of chamois creams currently on sale!