The finale of the Giro Manufacturers League is upon us. As Vincenzo Nibali led into the final stages, and Mark Cavendish chased the Maglia Rosso Passione – hoping to become only the fifth rider in history to win the points jersey at all three Grand Tours, we were in for an exciting finish!

The Manufacturers Leagues have also been a close run race, well in the Bikes section and for the 2nd and 3rd podium places they have anyway. Everything (nearly everything) is still up for grabs though in the final 7 (or will that eventually be 6) stages though, so let’s take a look at what happened. 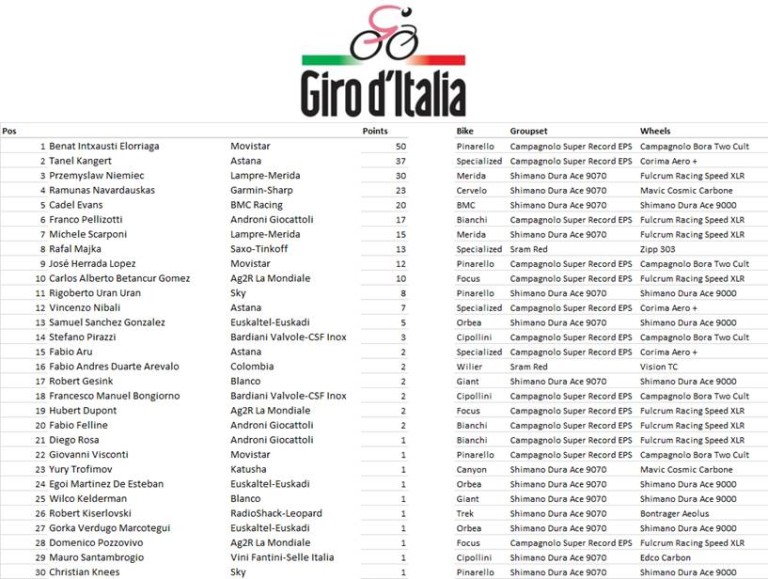 So a stage win here for Bernat Intxausti Elorriaga of Movistar, after a sprint finish from Kangert and Niemiec, with the Maglia Rosa and chasing pack 14 seconds adrift.

For the Manufacturers this meant: 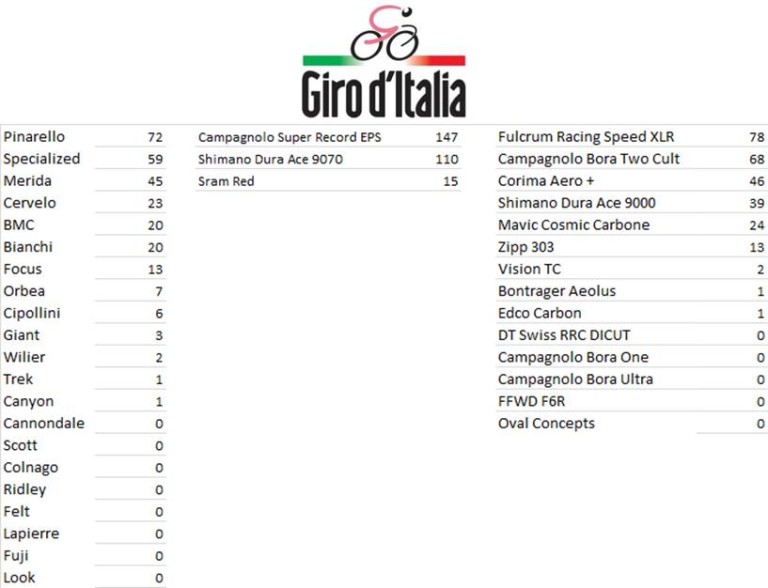 A poor stage for Shimano on both the groupset and wheel front, with Campagnolo and Fulcrum having a stomer. Pinarello take some valuable points in the bike race too… 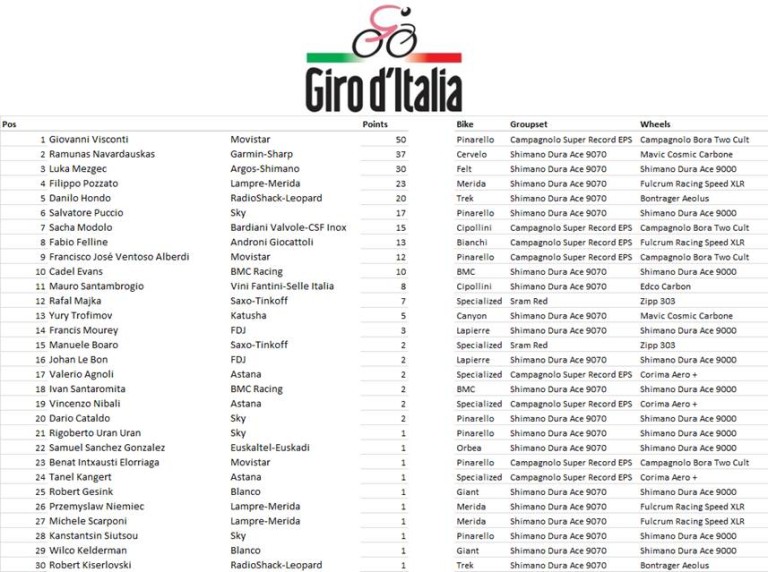 A brilliant display from Giovanni Visconti holding off the chasing peloton in the final stage to secure the stage win. His second stage win this year. 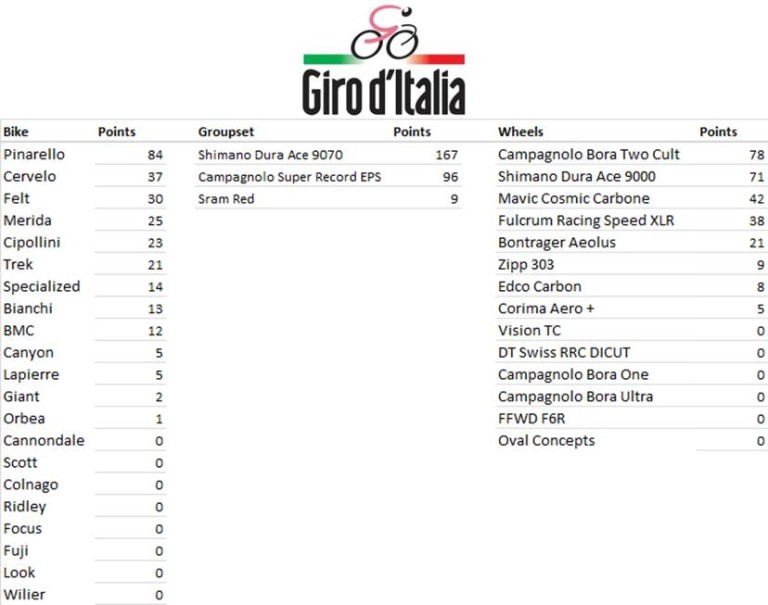 Another strong showing for Pinarello, and for Campagnolo in the Wheel division – Not many to go now!

Nibali, proving himself every inch the worthy Maglia Rosa wearer secured a win in the Individual Time Trial at stage 18, eating up the 20.6km race distance in just 44 minutes 29 seconds – Almost a minute clear of his closest rival. 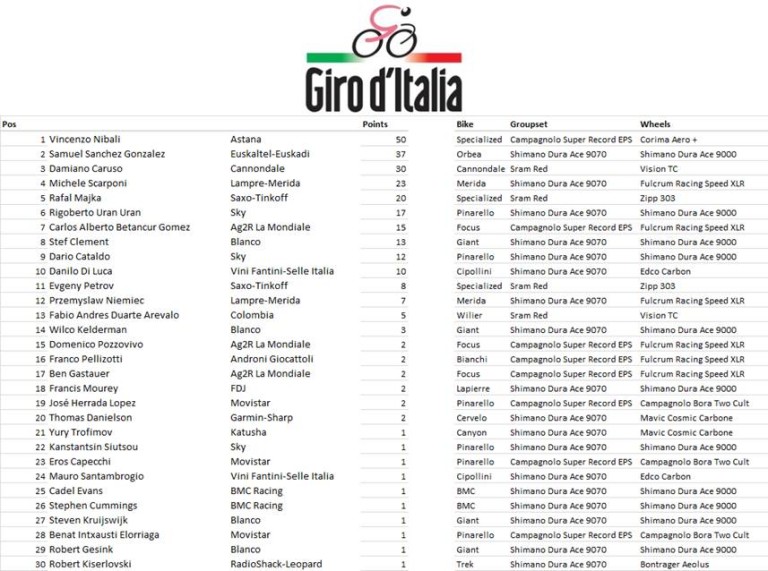 For the manufacturers this result meant: 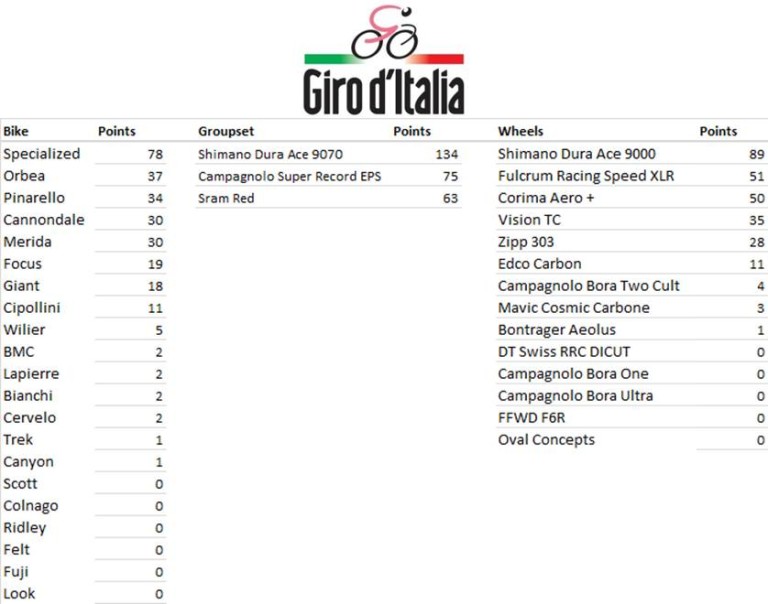 Specialized heading the bike race for the first time in a while, and Shimano impressing their dominance once again in the other categories.

For the first time since 1989, an entire stage of the Giro had to be cancelled. In this instance heavy snow was the reason – and anyone who saw the pictures must understand the reason for the cancellation. Rider’s health must come first, and although they have been punished with very poor weather in the Giro this year, this stage just was not safe. 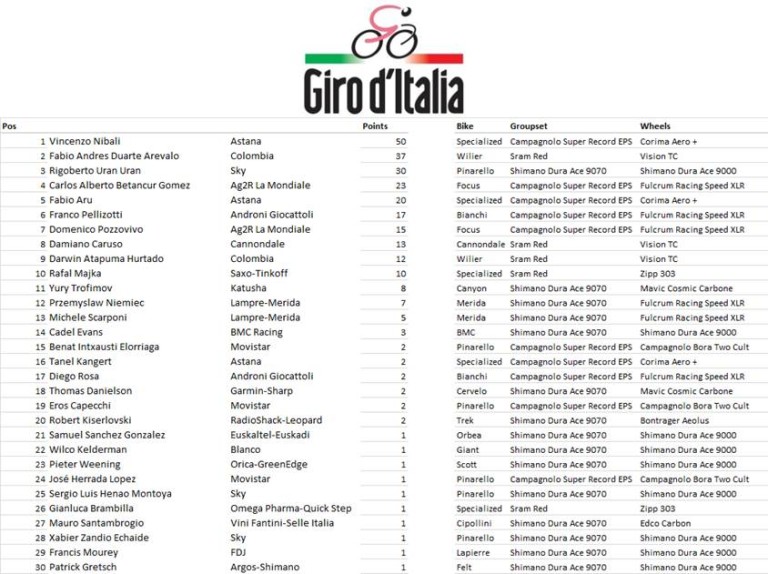 Nibali nailing another win here… Is he after the both Maglias, Rosa and Rosso?! Leading Cavendish at this point by 11pts, it certainly looks like Nibali will have two Jerseys to wear – perhaps he could split it like an awful football shirt? Red and Pink? Or maybe just wear them on alternate days or something 🙂 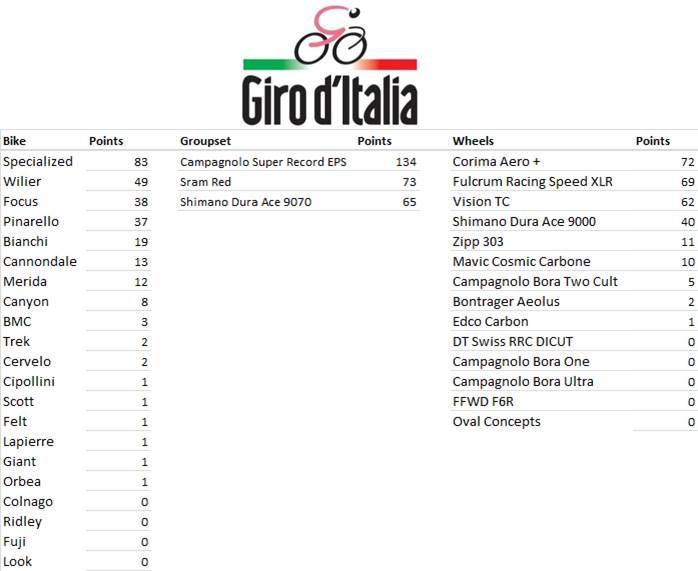 A very different picture to recent stages at the top of the leaderboards here, ok, so Specialized win another stage but the Groupset and Wheels leagues have some new names around the top of them. SRAM Red notably picking up some points from Shimano.

And so, the final stage is upon us…

The final stage of this years Giro brought the riders to Brescia. Where a stunning performance from Mark Cavendish secured the stage win and also the Maglia Rosa – with a stunning final stage performance to overhaul the deficit to Nibali and clinch the red jersey by 30pts! 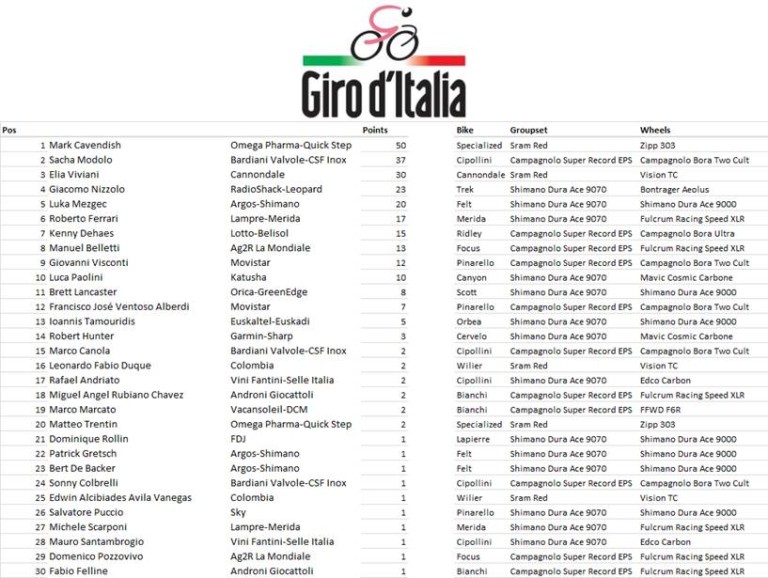 So Cav becomes only the 5th rider in history to win the points classification at all three grand tours. Furthering his pursuit of the title of best sprinter ever – although he won’t receive an actual award for this! 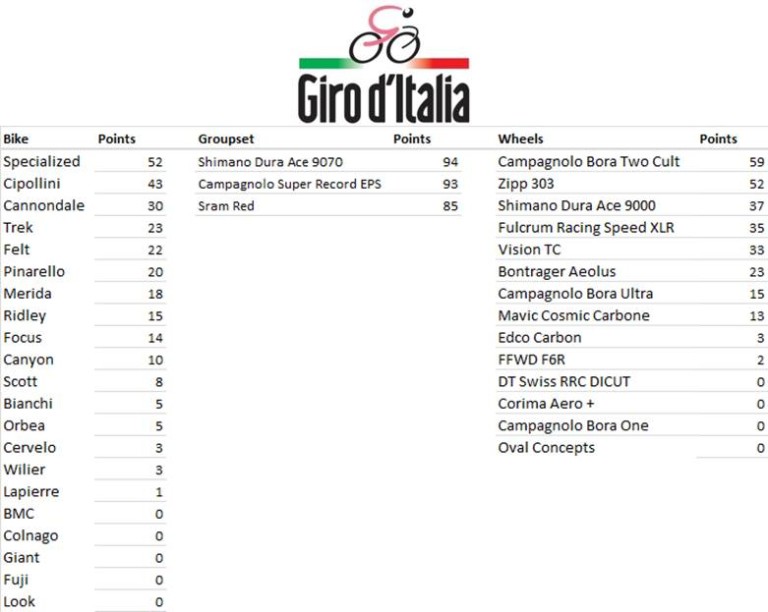 Specialized, Shimano and Campagnolo round out the final stage – a nice mix I think.

So that gives us the overall champions for the riders and teams, as below, congratulations!

But what about the Manufacturers League tables?

Well after a gruelling Giro, featuring a wide variety of weather, steep climbs coupled with rapid descents and some pan flat sprint blasts, we have the winners of the Bike, Groupset and Wheel categories just below. 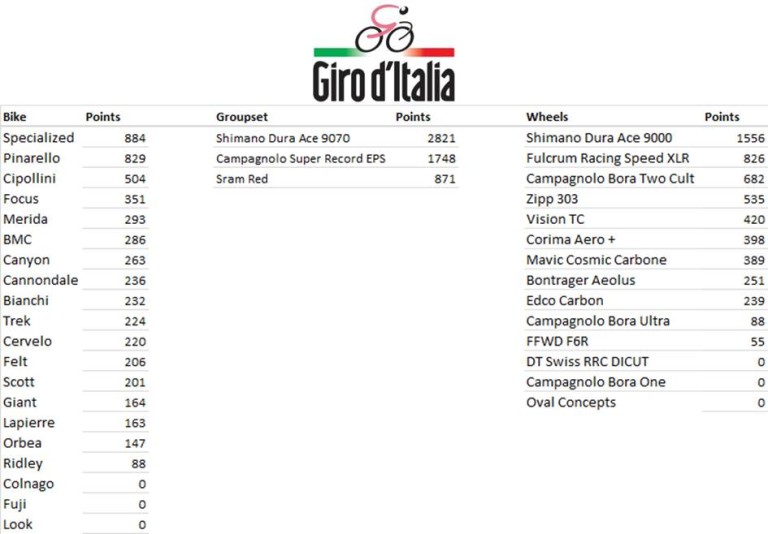 Specialized clinched the bicycle manufacturer title with some strong showings in the final stages, pipping Pinarello to the post. Cipollini secured third and ended up quite a way ahead of Focus in fourth in the end.

A strong fightback from Campagnolo over the final week could not prevent Shimano from taking a victory that seemed almost guaranteed from day one in the groupset category.  SRAM were a distant third in the table, but still managed a very respectable score.

And finally, we get to the wheel category. Again, Shimano dominated this category from early on and never looked in danger of losing it. Fulcrum though did make a challenge for the top spot, and in doing so secured 2nd place overall with their Racing Speed wheels. Campagnolo triumphed over Zipp to claim the third podium spot.

So that’s that for the Giro. A bit late in the reporting I know, but there were a few details to check and a few bits to iron out. I hope you’ve enjoyed reading the Manufacturers League, I’ve certainly learned a lot about the success of the components that go into the winning teams. I’ve also learned a lot about the best way to report on the Grand Tours – The Tour de France Manufacturers League might be trimmed down a little from this, we’ll see 🙂

So once again, congratulations to the winners in this years Giro d’Italia, and to the components that supported their wins.