A few stages to catch up on in the Manufacturers League, through to stage 12! Unfortunately we’ve seen Sir Bradley have to drop out due to a chest infection.

Hopefully he can get some recovery time in and be back firing on all cylinders to help team-mate Chris Froome in the Tour de France. Patrick will provide another update on the Giro early next week as the penultimate part of his great ‘What Have We Learned’ pieces for the Giro.

So, I’ll rattle off the number for the stages now – Check the final table for overall standings at this point! 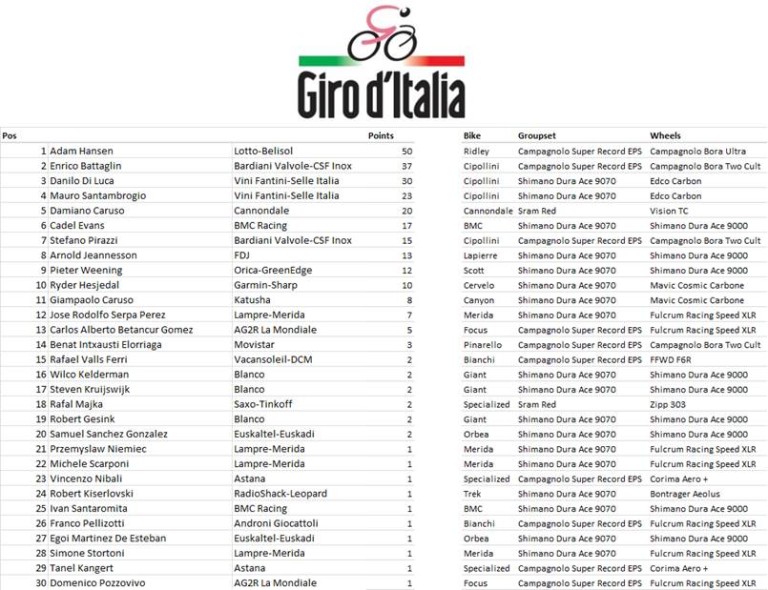 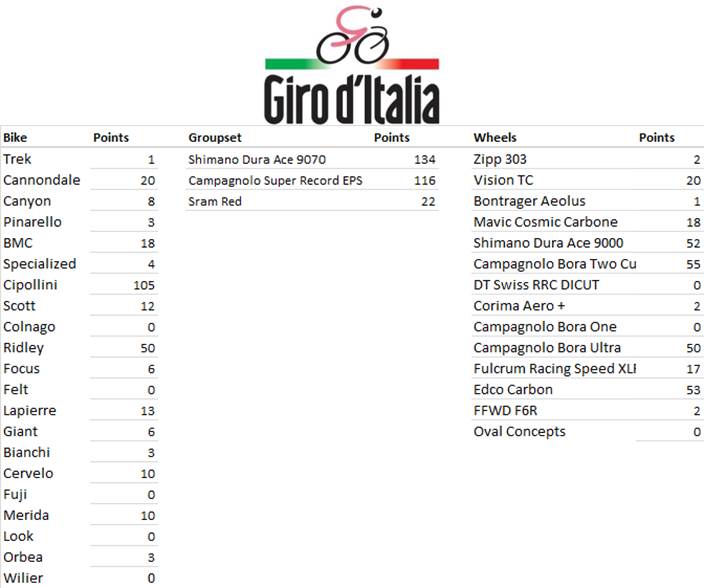 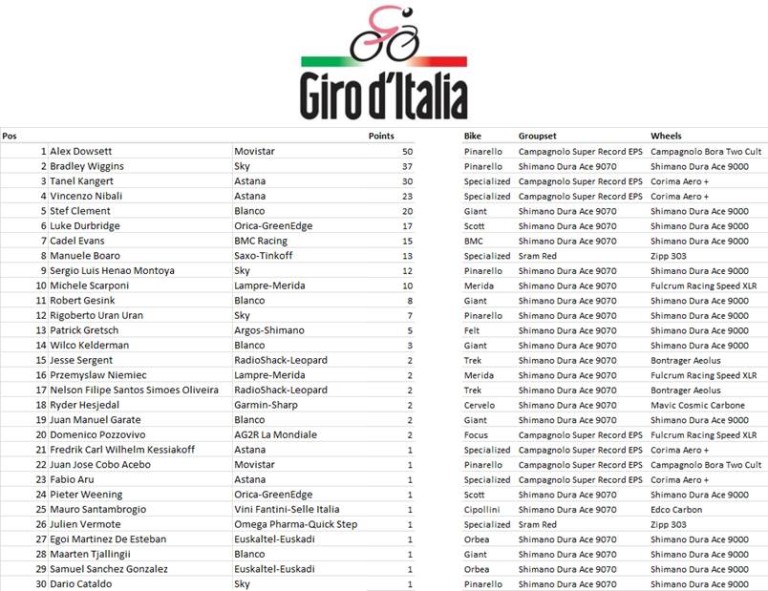 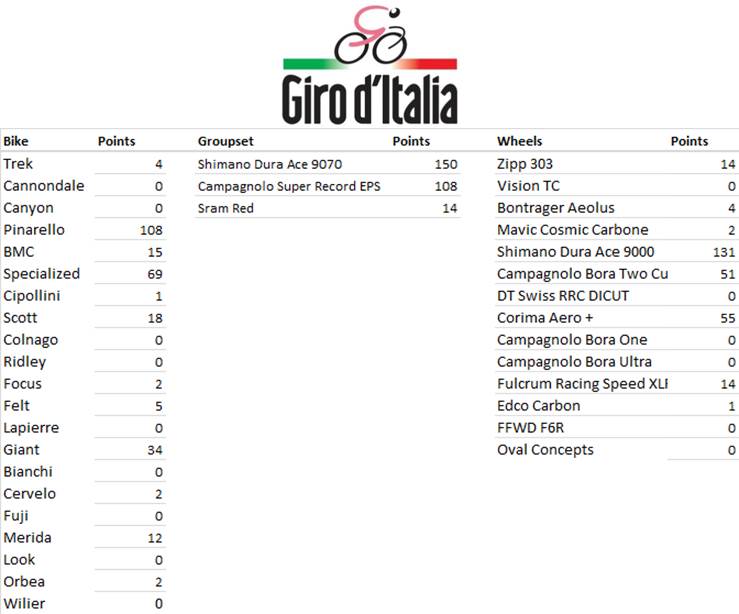 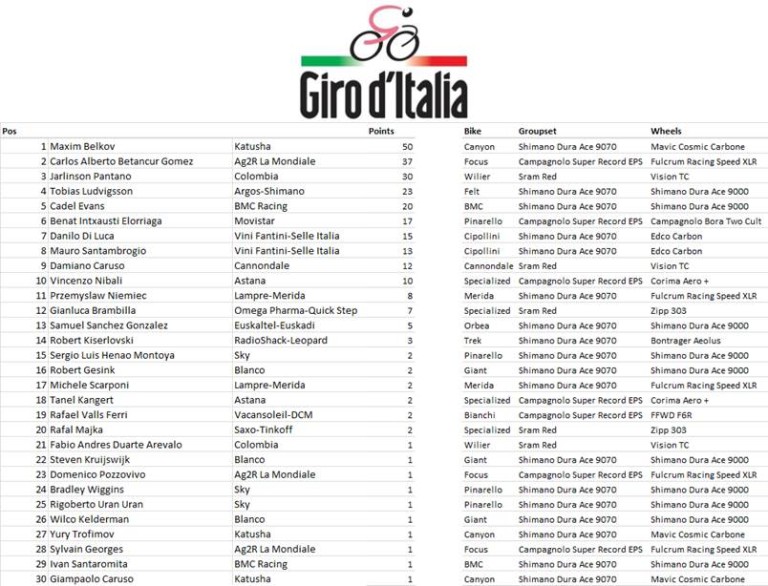 And for the Manufacturers this meant: 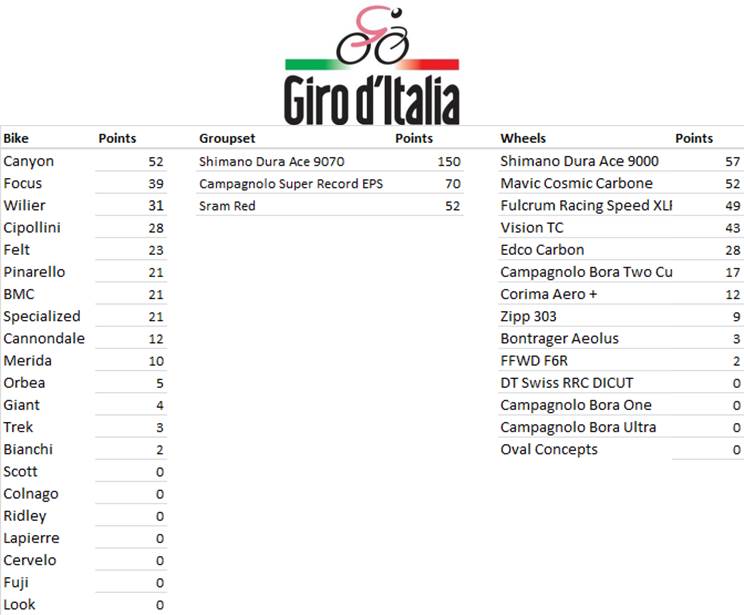 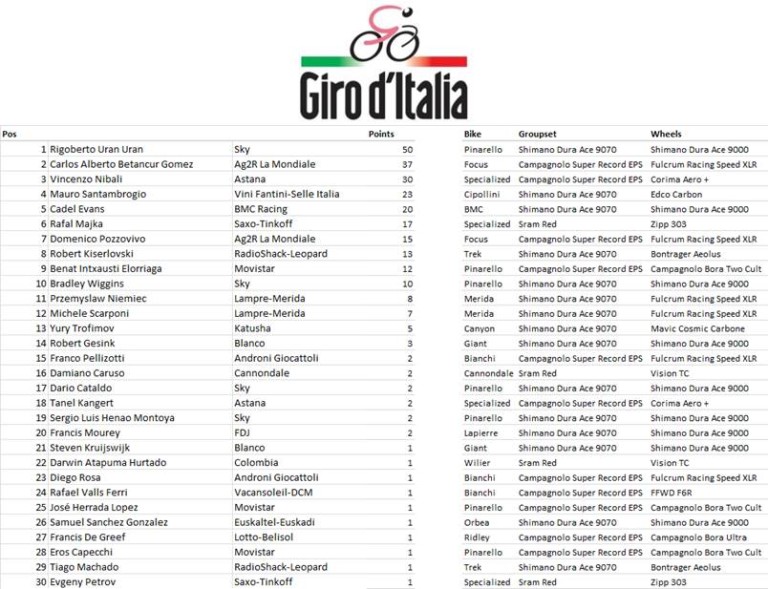 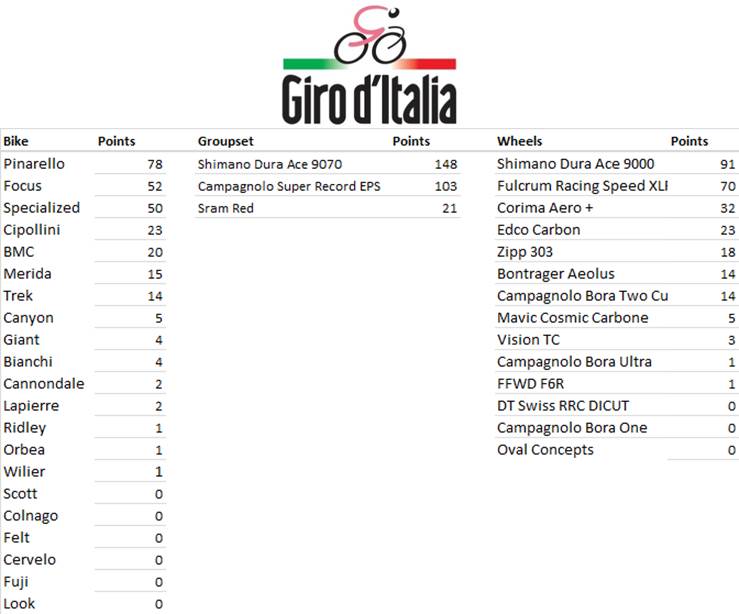 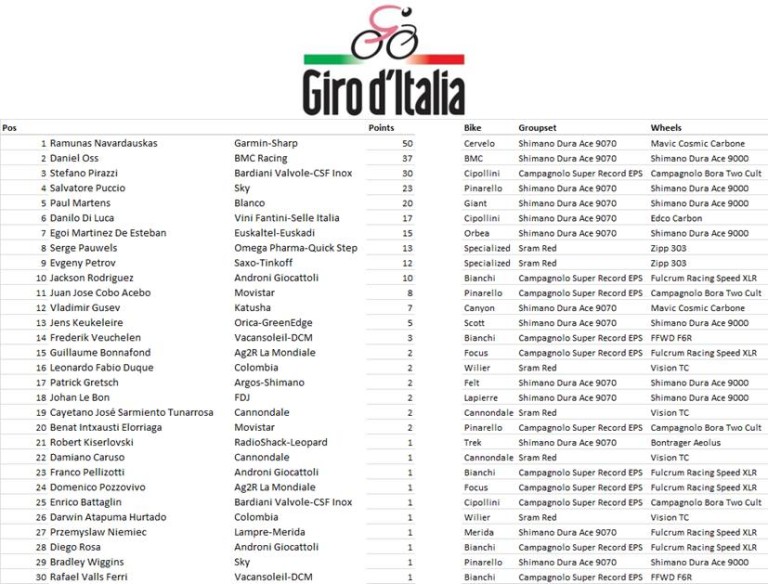 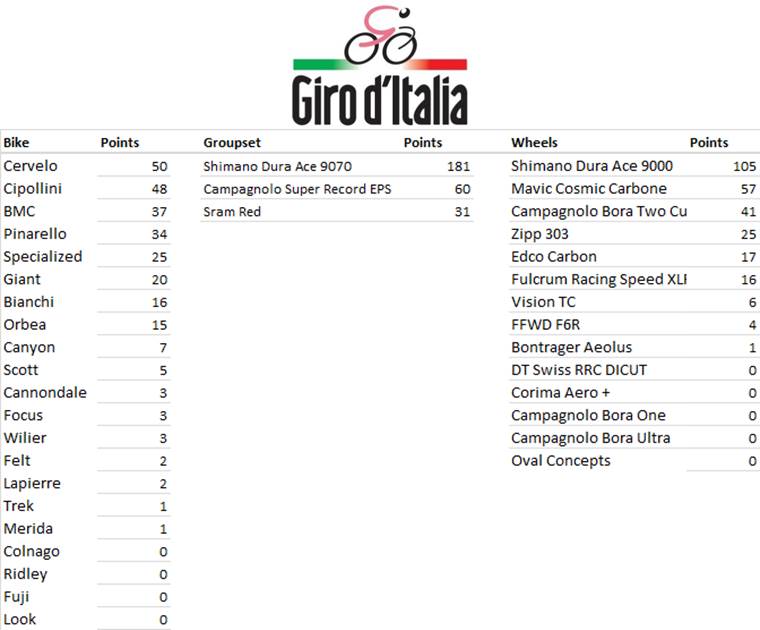 And the final stage in this round-up: Stage 12!

It’s that man again! Mark Cavendish secured another stage win with a barnstorming sprint finish, bagging some more points for Specialized, SRAM and Zipp in the process. 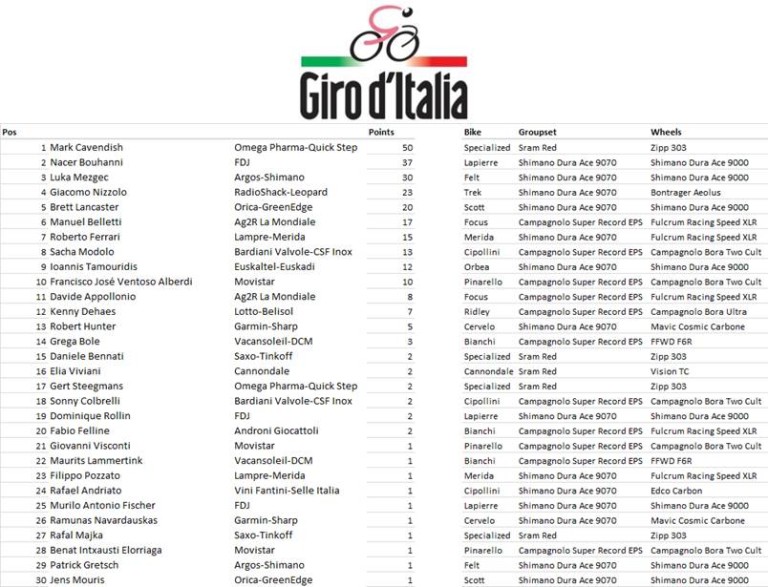 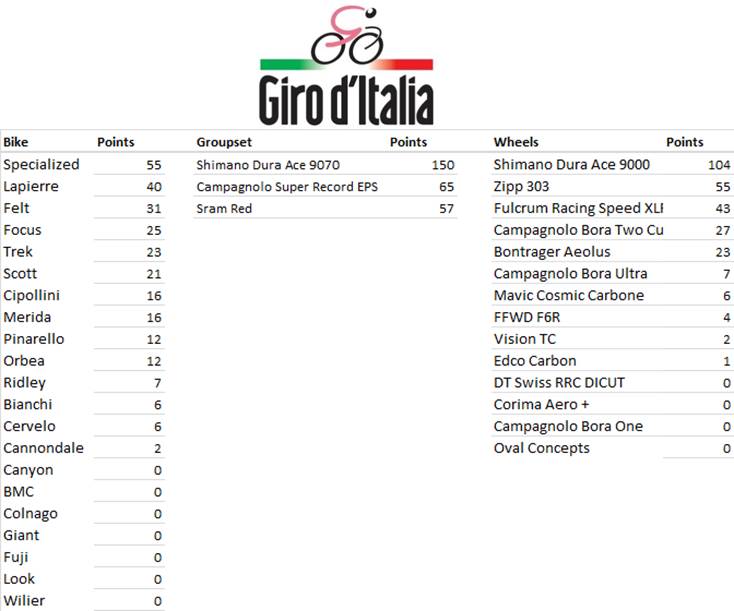 Phew – Left things a bit long there – I’ll try to update future stages in batches of three where possible!

So – with Vincenzo Nibali defending a slim lead over Cadel Evans as far as the riders are concerned, we now see a fight between Pinarello and Specialized at the top of the Bike Manufacturers league table. Cippolini had a great result in stage 7 though, so they are in close contention too.

In the Groupset Table Shimano Dura Ace is the clear leader, with more than double the points of second place Campagnolo and over 4 times the points of SRAM in third place!

Shimano dominance is even more apparent in the Wheels League – which is all over bar the shouting. Campagnolo are again a distant second with their Bora Two Cult wheels. The race to secure a podium position is much closer though, with just 67 points separating Campagnolo, Fulcrum and Zipp. 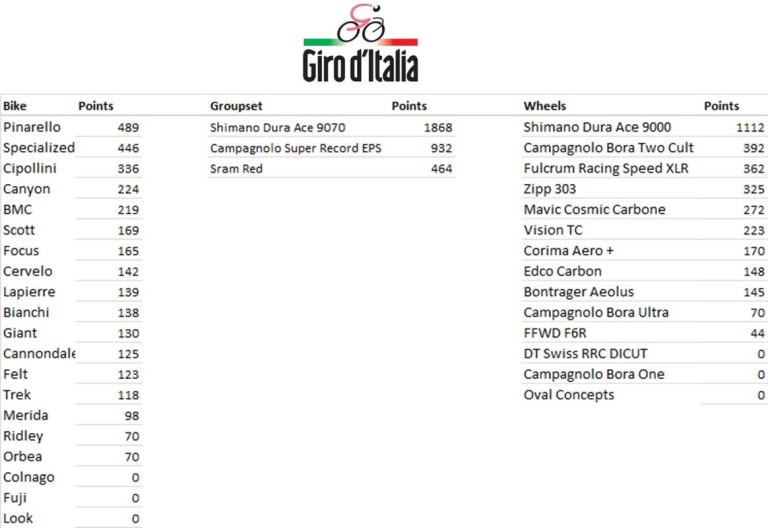