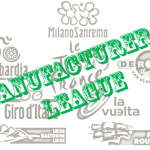 With the Giro starting tomorrow, many will ponder the question – ‘Who will win the Grand Tours this year?’

As someone with only a limited knowledge of the Grand Tours and their histories (I’ve worked in the cycle industry for just over 2 years now) another question sprang to mind… ‘Who will win the Grand Tours this year, from a manufacturers point of view?’

Which manufacturer will provide the winning frame? The winning groupset? Which wheels will spin to victory? So I started thinking about how best to draw up a ‘manufacturers league’ for battles between Shimano, Campagnolo and SRAM, between Pinarello, Cervelo and Cannondale and between Mavic, Fulcrum and Zipp – among others.

So, after a brief discussion in the London Suite here at Merlin Cycles, we decided to draw up a league of the top 30 finishers in each stage of each Grand Tour and for each of the one day Monuments.

Now each team will have different components for different stages, but for ease of use we will class each team as using their standard setup for each stage. While a team might use slightly different components from some stages, they will still be from the same manufacturer so there shouldn’t be any huge discrepancies – please feel free to let us know though if you spot any!

So, we have already had 4 of the 5 Monuments, starting with the Milan-San Remo up until the most recent Liege-Bastogne-Liege.  The results for these events are below.

For the scoring system we decided that we would award points to the top 30 riders, with the winning rider having a significant points reward above second, second above third and so and so forth until position 15, where the riders/manufacturers would then be awarded 2 points until position 21 with the final 9 riders/manufacturers receiving 1 point.

This was the fairest system to award the top 3 riders the most points but to also give the remainder of the top ten good points for their effort. 30 points for 1st, 29 for 2nd, 28 for third etc does not award the winner sufficiently. If you have any other suggestions for future leagues, please let us know (zzzzz, sorry, that bit is over with now)

And now, the to Milan – San Remo Results! 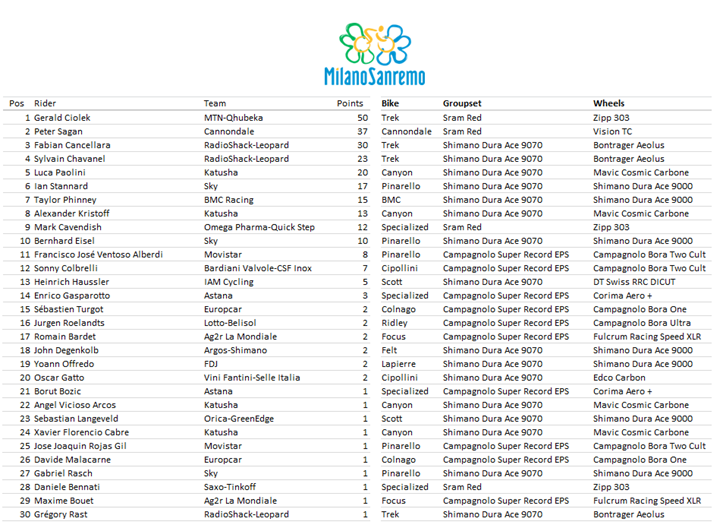 Which means for the manufacturers… 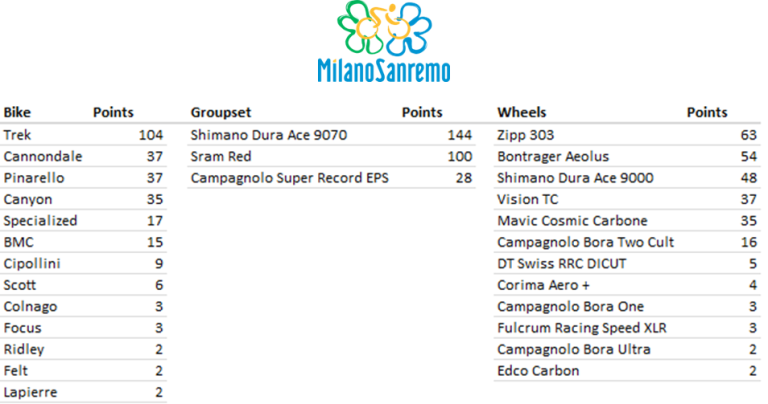 So a huge win for Trek at the Milan San Remo, with Shimano leading the Groupsets from SRAM and Zipp the leading wheels from Bontrager.

Next up the Tour of Flanders 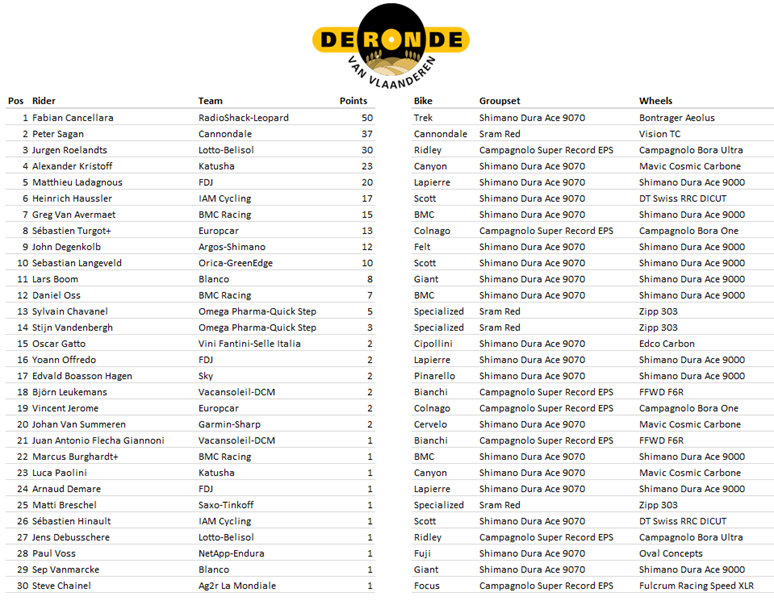 A first win and second podium for Fabian Cancellara, but big changes in the bike frame and wheels sections. Shimano remains the big winner in the groupset divison.

Here are the full Manufacturer League Tables for the Tour of Flanders: 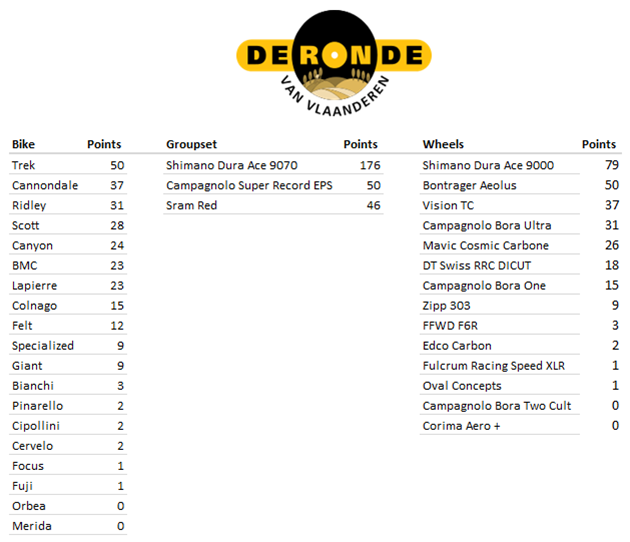 Now for the bone-shaking classic, Paris-Roubaix. 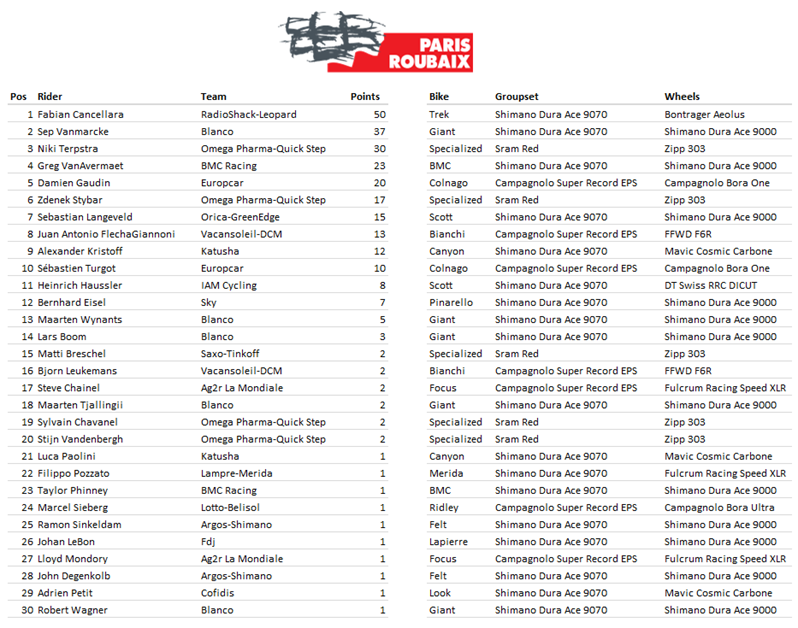 A second win for Fabian Cancellara, which will put him comfortably on top of the riders league. Another strong showing from Shimano suggests their growing dominance of recent years is set to continue. The bikes league makes interesting reading for the Paris-Roubaix, less than 30 points splitting the top 5 manufacturers.

Full results for the Paris-Roubaix 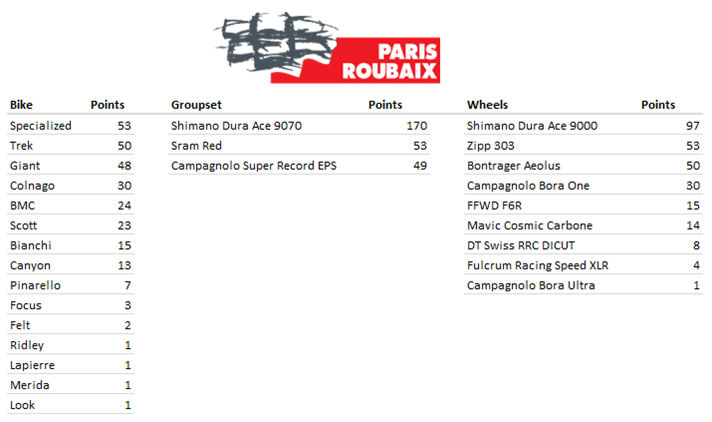 And finally, the fourth monument of the year – the Liege-Bastogne-Liege. 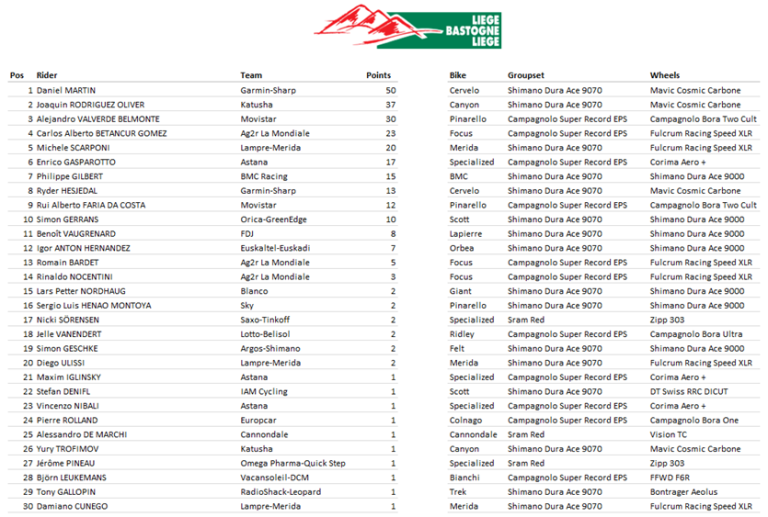 Mr. Cancellara allowed someone else to win this, and he may have to until he improves his climbing (pretend knowledge there). So we have new riders and manufacturers topping the leagues. Mavic had their best showing of the year so far in this, the penultimate monument of the year. 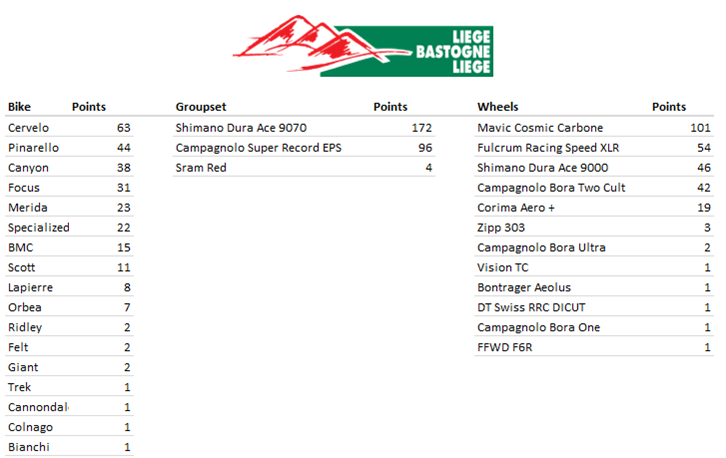 So there we have it. A mixed bag (Shimano Groupset dominance aside), so it should be interesting watching the manufacturer battle unfold over the course of the three Grand Tours now.

Stay tuned for daily updates on the Giro d’Italia, starting tomorrow in Naples.