The Manufacturers League returns, for the final Grand Tour of 2013. If the Vuelta is anything like the Giro or the Tour then we are in for a real treat!

The Vuelta this year is a rather hilly affair, favouring the local lads – Valverde and Rodriguez and the winner of the Giro, Nibali –  especially as some of the best Grand Tourers seem to be saving their legs for an assault on the World Championships in September.

Of the three Grand Tours, I think I’d most like to follow the Vuelta around. I think spending a month, touring around Spain in August, watching a Grand Tour would be amazing – nudge, nudge, hint, hint boss… “Welcome to the 2014 Vuelta Blog, live from Barcelona”…

Anyway, let’s get on with the Manufacturers League for the 2013 Vuelta a España.  I’m sticking to the top 50 riders again as I feel it gives a better impression of the race than the top 30. The points systems remains the same, and largely the teams do too. We have the inclusion of the Caja Rural team and the Net-App Endura though, so some new riders and machines to keep an eye on.

So, what has happened over the opening three stages?

The opening stage was the team time trial, so instead of individual riders we have teams in finishing order. An impressive ride from Astana, taking the stage win by a full 10 seconds from RadioShack-Leopard. Pre-Vuelta favourite Vincenzo Nibali moved aside letting  Janez Brajkovic be the first to wear red this year. 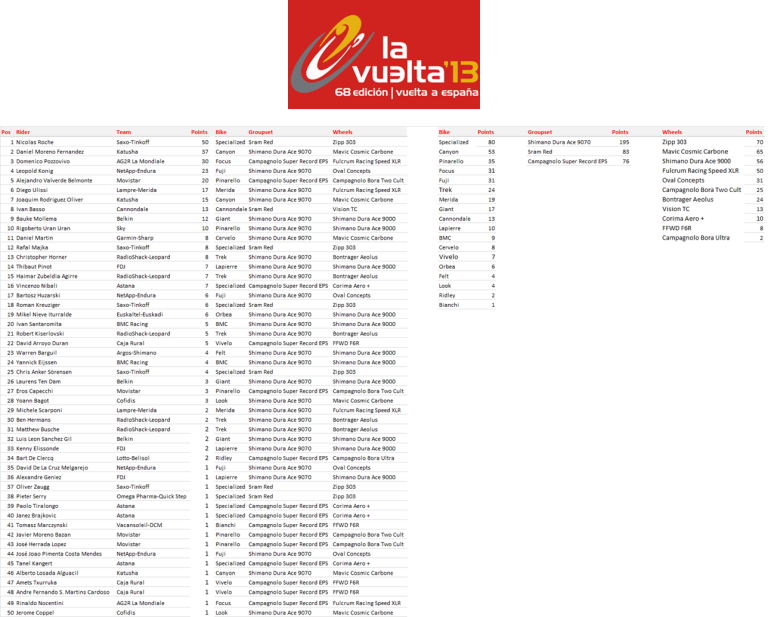 Stage two saw a thrilling stage win for Irish rider Nicolas Roche. I’m sure he’s sick of being described as ‘Son of Stephen Roche’, so I won’t refer to him that way 🙂 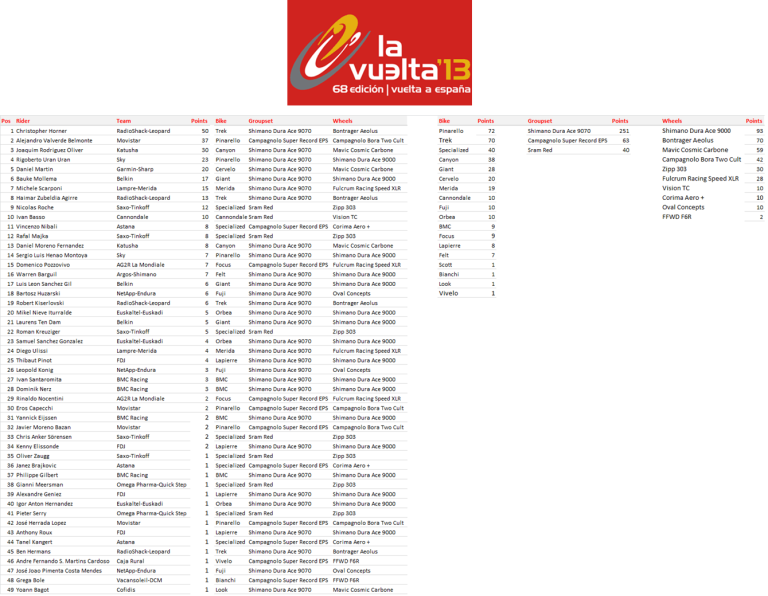 Christopher Horner of Team RadioShack-Leopard broke away in the final kilometre of the category three climb into Mirador de Lobeira, proving age is just a number. Horner is 41 years old. Incredible. He beat out the top race favourites by a couple of seconds, but also he overtook Nibali in the general classification to wear Red after stage 3.

So which manufacturers are leading the race in the Vuelta? I hear you asking.  well, here is an update on the manufacturers after the first three stages. 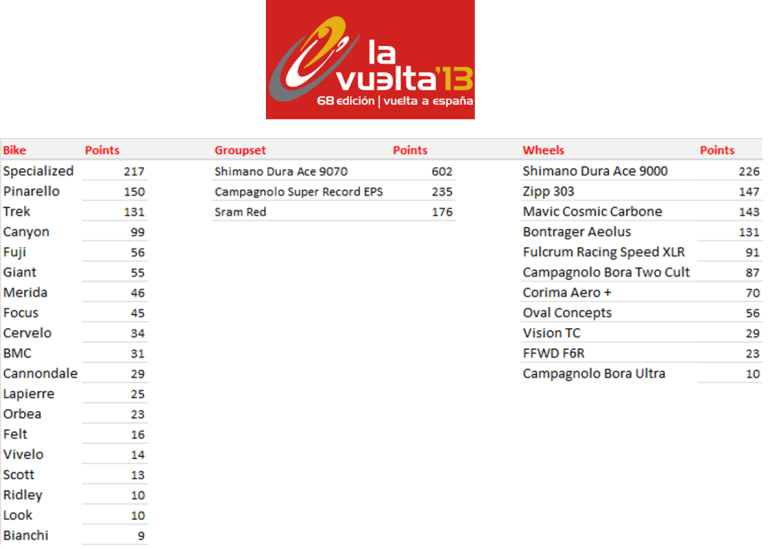 A convincing start for the three big boy bikes – Specialized, Pinarello and Trek. Shimano bossing the groupset category (again) and Shimano, Zipp and Mavic leading the way for the wheels (Bontrager not far behind).

Stay tuned for more updates on the Vuelta Manufacturers League!