Well the Vuelta is over for another year, closing out the Grand Tours of 2013 in style.

Let’s review the final stages for the Manufacturers League and see how they affect the tables. 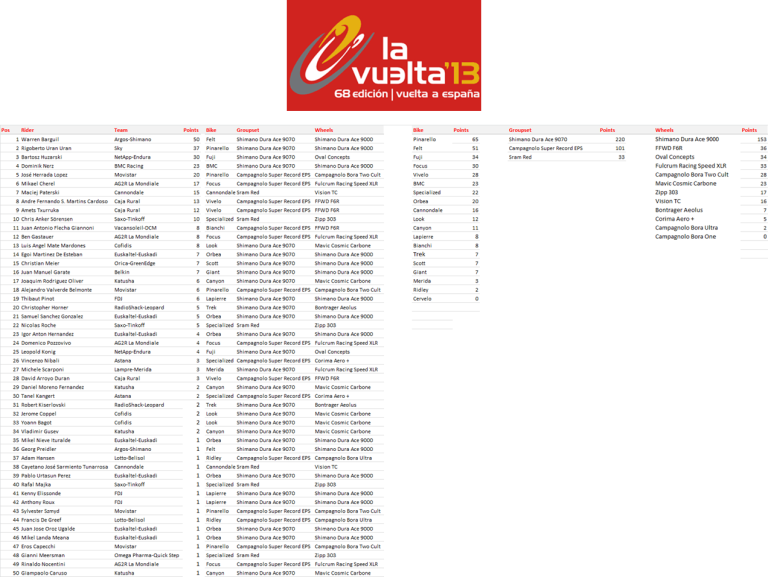 The final stage in the Pyrenees saw Nibali lose more time to Horner in the GC. Warren Barguil took his second stage of the Vuelta this year, beating Team Sky’s Rigoberto Uran by a masisve margin – well, almost a full inch. 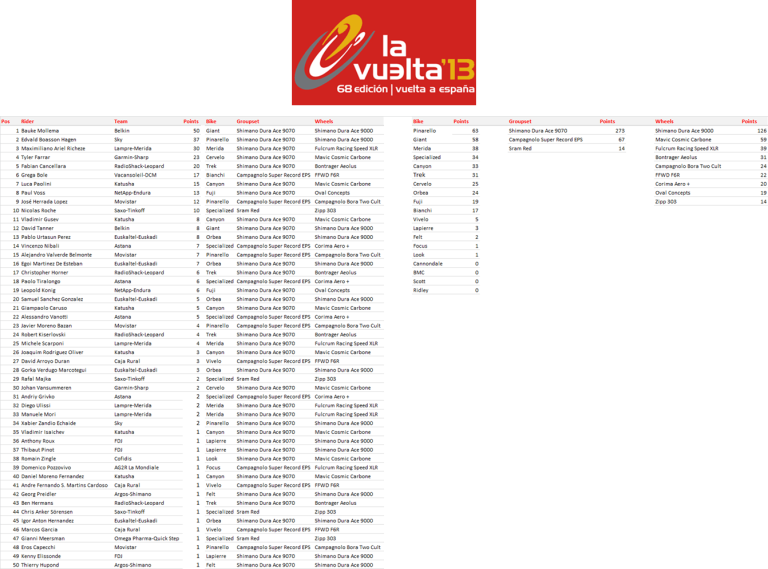 Bauke Mollema from the Netherlands took the stage win, characterised by cross winds after breaking away from the smaller than usual peloton with 700m to go. 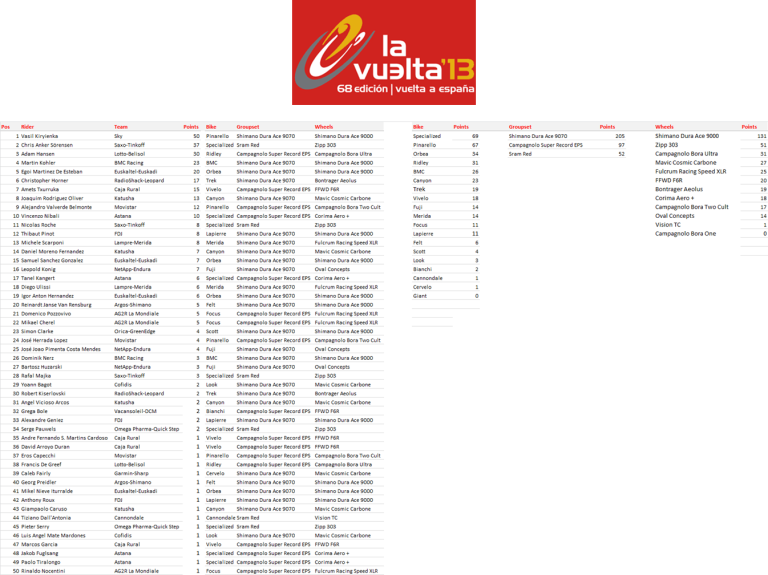 Vasil Kiryienka took the stage win and dedicated his victory to Daniele Toroli, his first directeur sportif who passed away recently.

In the GC, Vincenzo Nibali held on to his overall lead by a slender 3 seconds after being dropped by Chris Horner in the final kilometre – There’s all to play for now! 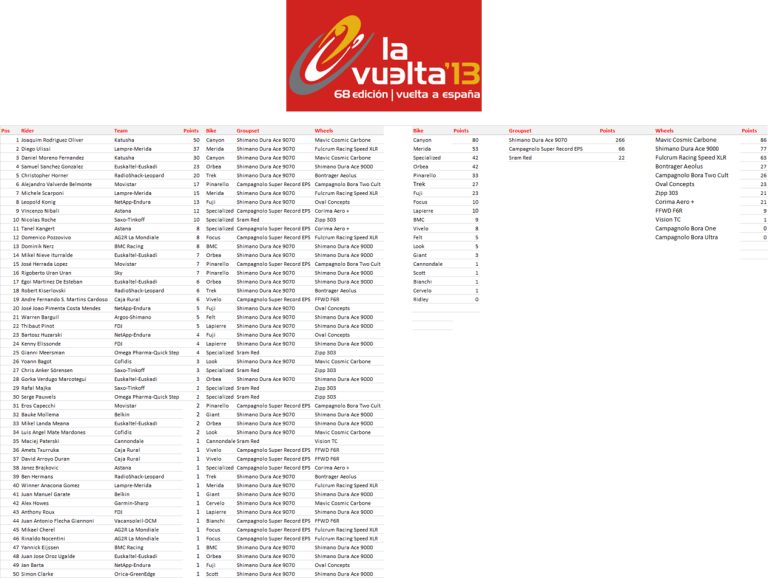 Going into today Chris Horner had a three second defecit to make up non Nibali, and he out sprinted the Italian today to overhaul that defecit and take the Red Jersey… by three seconds.

Joaquim Rodrigues took the stage win, by an impressive 11 seconds, but it is surely toolate to challenge for anything but the final podium place for him. 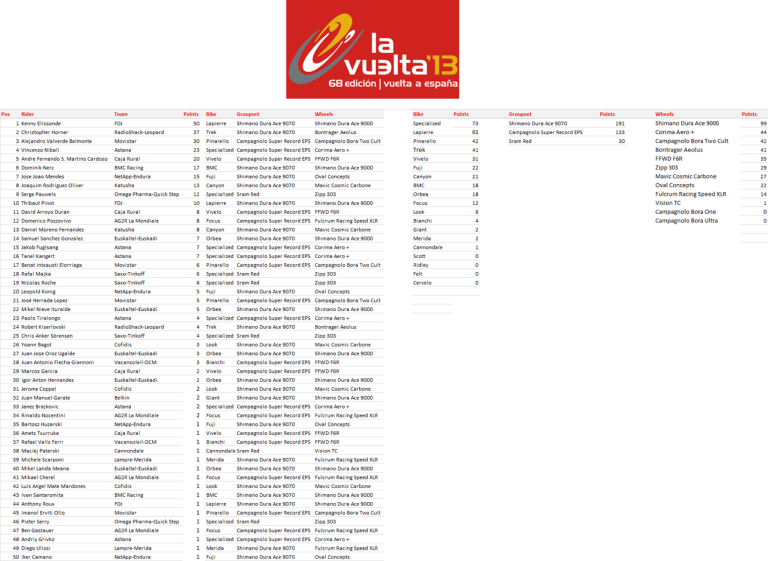 Thepenultimate stage saw a day for riders at the opposite ends of the age range – Firstly, 22 year old stage winner Kenny Ellisonde took on Spain most notorious mountain and won by a clear 11 seconds. Secondly, 41 year old Chris Horner cemented his claim for the Red Jersey by dropping Signor Nibali and extending his lead to 37 seconds – surely unassailable now? 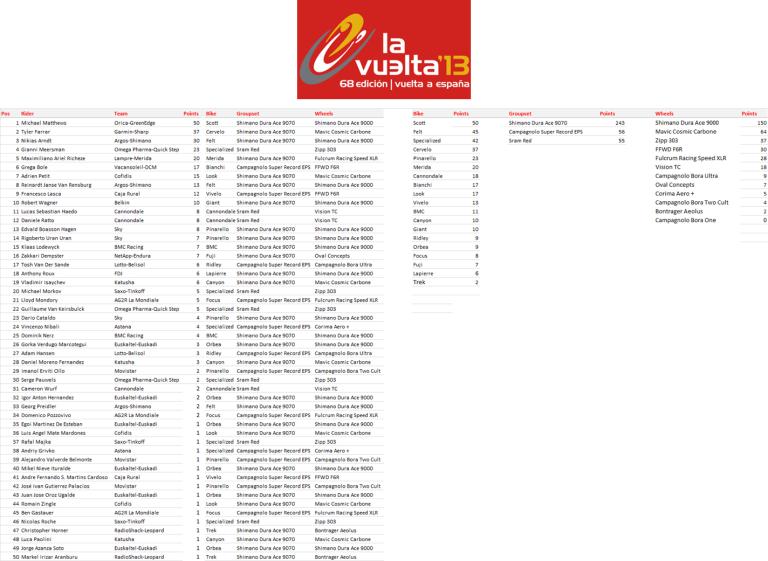 Horner was incredible throughout the Vuelta, and fully deserves the win. Beating second placed Nibali by 37 seconds overall, Horner was consistent throughout and won this Grand Tour in the final 4 days. Alejandro Valverde Belmonte took the final podium place, 1 minute and 36 seconds adrift.

So here are the final standings of this year’s Vuelta a Espana. A comfortable win in each category again for the usual suspects – this shows how even the best manufacturers are not complacent about their products and are always striving for more competitive products, that will keep them at the forefront of performance. The dominance of Shimano is now complete – utter dominance in the groupset and wheel categories at all three of the Grand Tours – Hats of to the boys and girls in Sakai!

And finally, for the winning bikes, groupsets and wheels of the final Jersey Wearers.

Christopher Horner took the Red Jersey (obviously) but also the combined jersey with a combined score of just FIVE points! A superb effort. Alejandro Valverde Belmonte took the Green Jersey (just, from Horner), something to satisfy the fervent home support at the Vuelta. Frenchman, Nicolas Edet took the polka dots (again, just, and again, from Horner).

See you next time for the final Manufacturers League outing of the year – The Giro di Lombardia – Bit less of a slog for both reader and writer! 🙂