A bit of an extravaganza here folks. I may have taken the odd day off work, which was lovely, but I’m back now and ready to update you on an overdue Manufacturers League for the final Grand Tour of the year, the Vuelta.

Let’s get on with it then, Naughton. 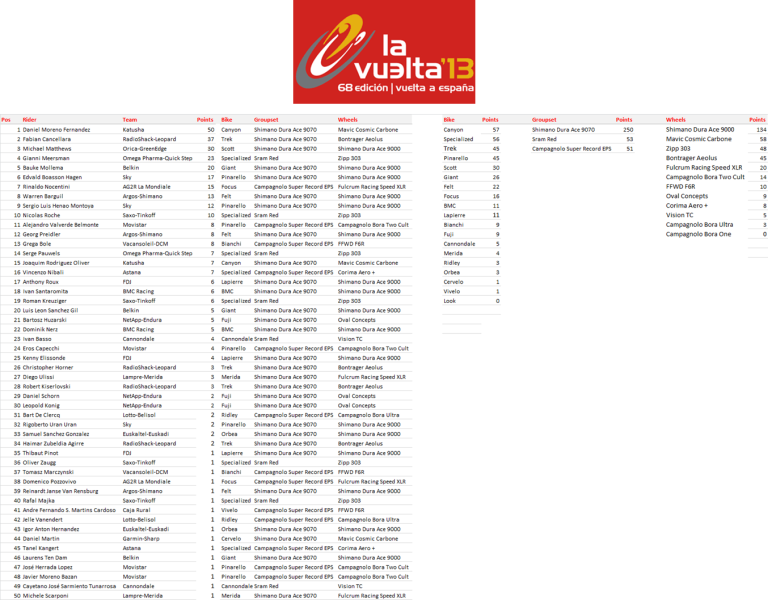 A brilliantly timed attack on the final climb secured the stage win for Daniel Moreno – his first of the 2013 Vuelta and his third overall. Vincnezo Nibali moved into the Red Jersey. 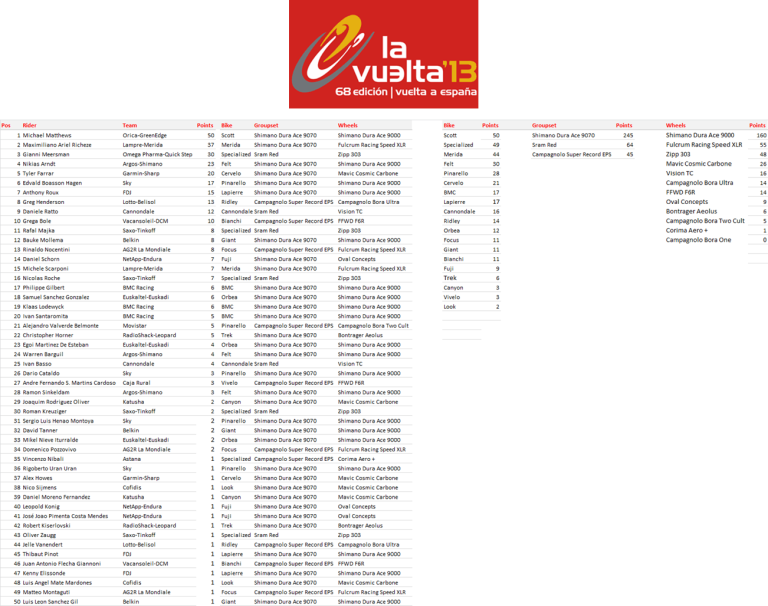 My only destination from sober is drunk, but in this  case the the stage went 174.3 pretty leisurely kilometres without any major climbs to Lago de Sanabria. A tremendous lead out couldn’t quite get Argos-Shimano the win, the winner instead being Michael Matthews. His first Grand Tour stage win, the Orica-GreenEdge man showed there are still plenty of quick finishers even if the likes of Cavendish, Kittel and Greipel are not in attendance. 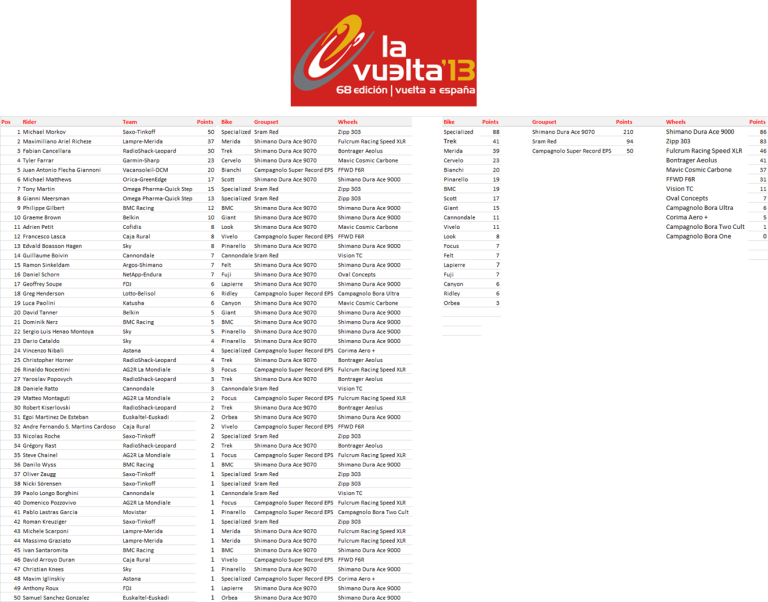 Tony Martin – I salute you.

To start a breakaway 5 kilometres into a stage and only lose your lead in the final 50 metres is incredible. Nail biting stuff, and ultimately disappointing but a great achievement all the same. Michael Morkov headed the pack that swallowed Martin up at the death, taking the stage win. Just an idea for Tony, next time spend less time looking behind you! 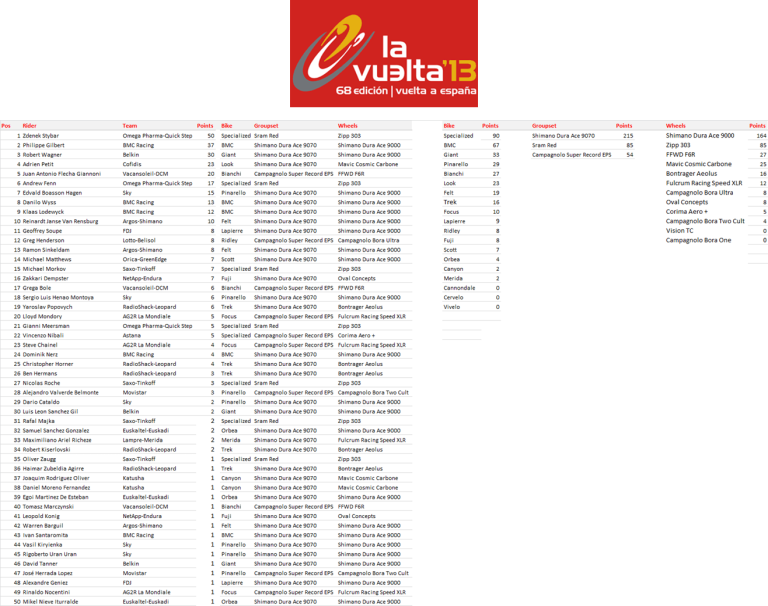 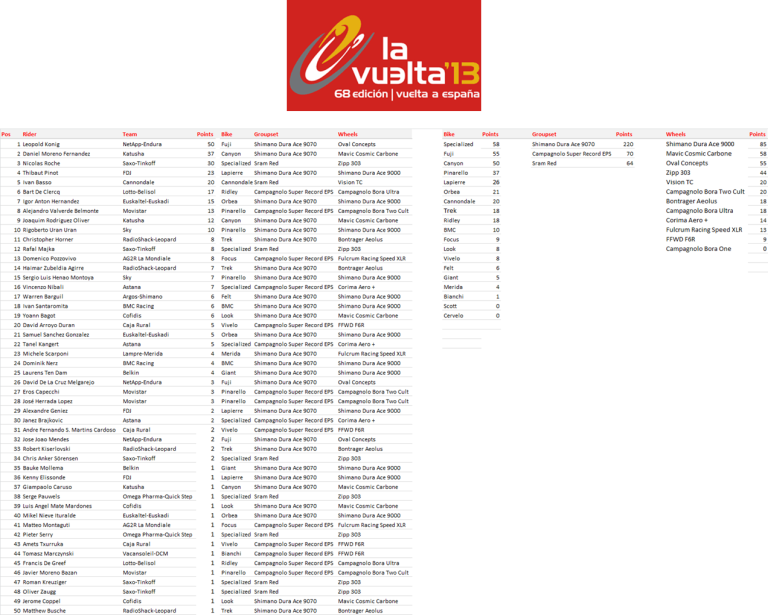 Another relatively short stage here – just over 100 miles – but with a brutal finish. Although Igor Anton had a 9 second lead with 2 km to go, a move always looked on the cards. It came from the brilliantly named Leopold Konig. The Czech accelerated away from the GC contenders Roche, Basso and Moreno and ended up taking the stage win by a small, but significant margin.

At this point we have Nicolas Roche in Red, Cuadros and White, Daniel Moreno in Green, Movistar leading the team classification and Antonio Piedra currently the most combative rider. 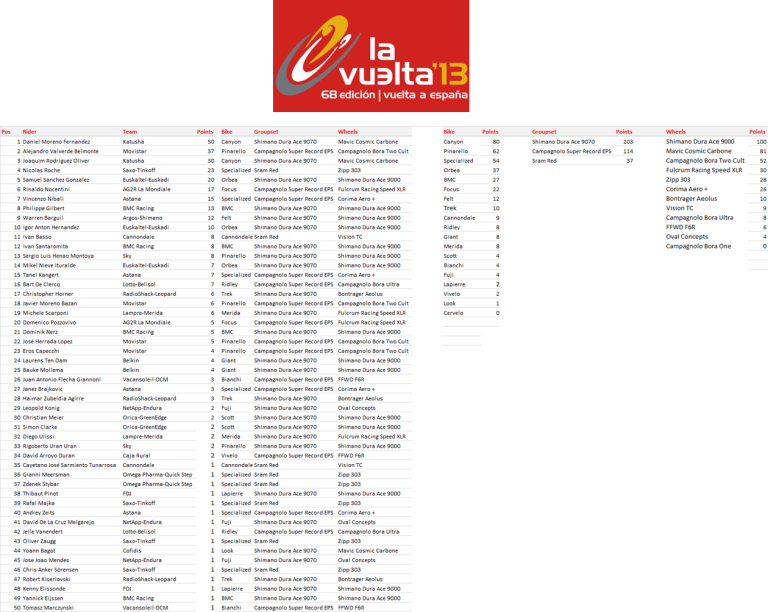 Daniel Moreno took his second stage win today, beating previous Red Jersey wearer Nicolas Roche by 8 seconds – to take the Red Jersey from him. After failing to secure a big enough lead, Team Sky rider Edvald Boasson Hagen of Norway was caught in the final kilometres and ending up finishing 1 minute and 50 seconds down in 70th place overall. 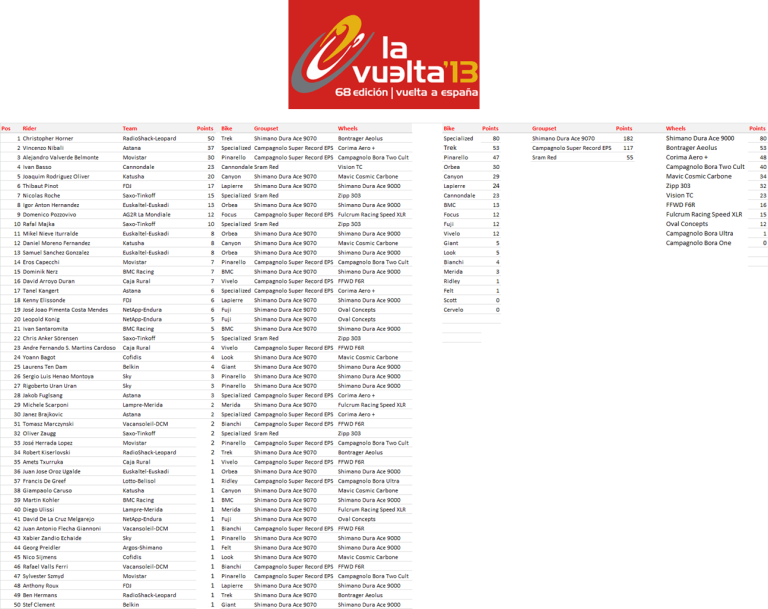 RadioShack-Leopard rider, Christopher Horner of the USA took his second stage win of this year’s Vuelta today, and in doing so took back the Red Jersey. An incredible stage for Horner sees him now hold a 43 second lead over the favourite for the GC title, Vincenzo Nibali.

So the standings for the riders after the first ten stages are:

And as for the Manufacturers… 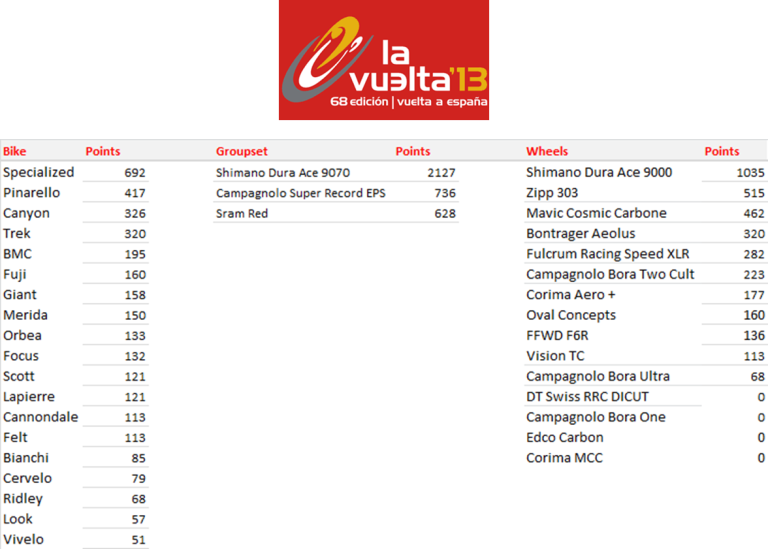 Specialized and Pinarello continue their battle for the top spot, with Canyon sneaking third place from Trek in the Bikes league.

Shimano continue their dominance in both the Wheels and Groupset leagues.

Okay, so I’ll try to keep the next update a bit less massive 🙂 see you on Monday!