Patrick has a cupboard full of polystyrene hats from the nineties. Here are his three favourite foam lids.

We cyclists can be a nostalgic lot. This is combined with a slight hoarder mentality with certain products. I suspect this is also a bloke thing.

I’m sure there’s something that all cyclists have kept just for the memories it holds even if it is knackered or poorly performing compared to modern day equivalents.

Sometimes we have such things displayed prominently. Sometimes they’re thing that are stashed away in a box or drawer, forgotten about and rarely seen but when rediscovered they bring back some rose-tinted memories.

Here’s a look at some of my happy treasures* 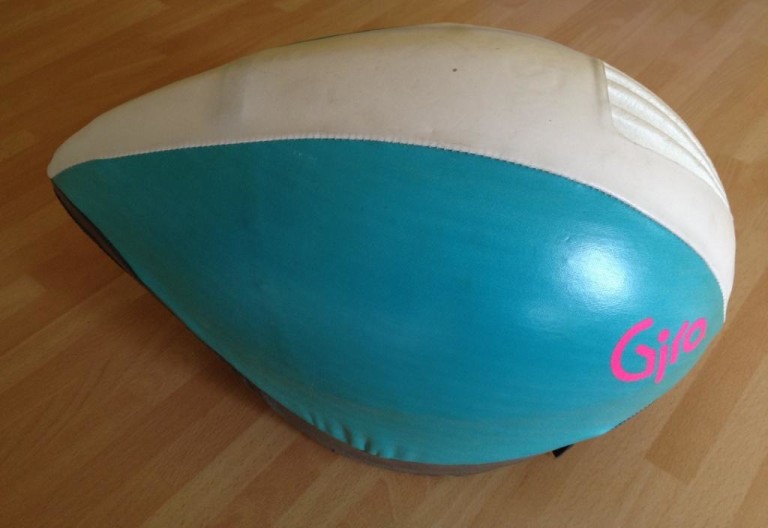 This is one of my favourite cycling possessions. It brings back a lot of memories.

Greg LeMond made this helmet iconic when he wore one to beat Laurent Fignon in the time trial on the final day of the 1989 Tour de France in Paris. His eight second overall winning margin is the smallest in Grand Tour history and whenever that ride is talked about the image of LeMond used is him in full TT mode wearing this helmet.

The bike shop I worked in in 1990 had this on the shelf for a while, as a lot of riders were scared to buy or use it as they didn’t think they were fast enough

Anyway a few good weeks later and the cheap trade price meant I had to have it. I turned up at local events thinking I was ‘the dogs’ – back then it was all bare head or caps back to front – but in reality I just stood out and marked myself out.

Still, it was good for morale. I used this helmet throughout the 90s on many different courses but these days it only comes out to show people. It really was revolutionary for its time and even now when I put on the latest Giro TT lid I still think of this one and how it really started this revolution off.

It has to be worn with period-style Oakleys though for full effect. 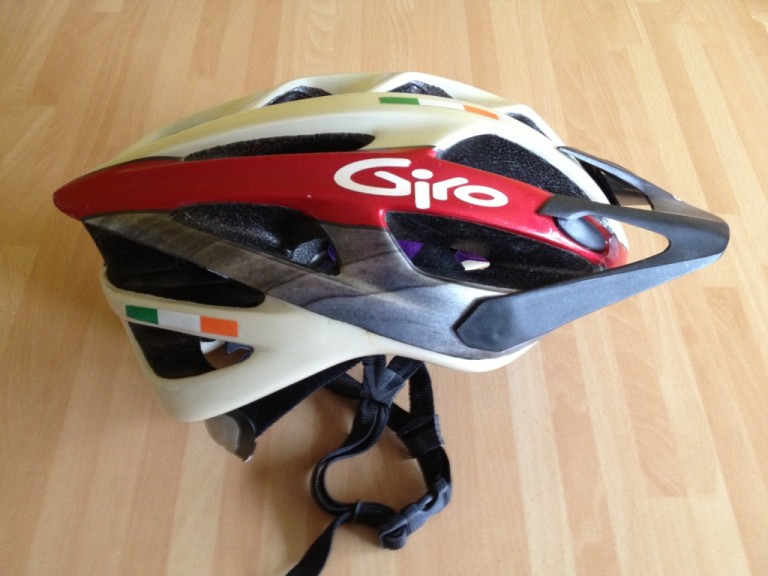 This has to be the helmet I lusted after the most in all my time riding. All the top mountain bikers of the 90s wore this helmet at some time.

After trying it on many times I knew I would have to have one. It looked so cool and was so comfortable.

It was one of first XC lids to be supplied with a peak and no one dared complain that the peak colour didn’t match the rest of the helmet (although the later versions did and looked so much better).

I rode all over the UK in many trail centres (before they were trail centres) without ever landing on it in a crash which is pretty amazing since I wrecked the next few helmets I had in crashes. I even took it to Morzine on my first 5” travel downhill bike in 1999 and didn’t stack it once – which may have been more to do with holding back than skill though!

Even now I think it still looks great and could still cut it in today’s mass of XC-specific lids. It sits on my ‘collectables’ shelf and when I look at it it stirs a lot of happy riding and road trip memories of a time when things were a lot less complicated – both with mountain bikes and life in general! 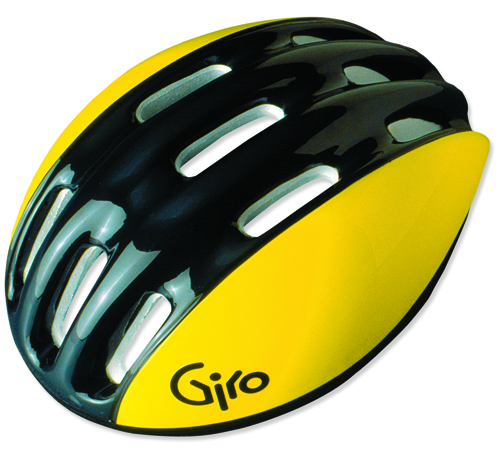 I’m including this helmet as every time I hear about the modern Giro Air Attack I think of the original Air Attack from 1990.

This was so different looking to helmets that time with its large vents and smooth sides – which were ace for sponsor’s logos – and its long aero shape. Okay, it may look dated now but it was so comfortable and so cool back then.

It was my first proper hardshell road helmet and I saved for ages for it. I regret giving it away now but it went to as good home. It’s good to see Giro resurrecting the name for their modern road aero helmet. It still evokes happy memories of the original when I wear the new one.