We’re a broad church of cycling tastes at Merlin Cycles. Road, MTB, cyclocross. We’re into it all. Despite it coming at the end of the season, October looks like it’s actually a really great week for bike racing in all its forms.

We’ve just created a Race Calendar section on this blog. On it you will find details of all the most important or most interesting bike races that are happening both in the UK and around the world. We weren’t going to unveil it until we had a few more details about 2015’s races but we then figured that there’s still loads of interesting races to happen in 2014 – so here it is (this is an old post and the linked content no longer exists). 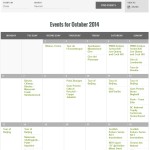 There are a few online race calendars out there but none that cover the gloriously varied world of bike racing as well as the Merlin Cycles’ calendar. It’s extensive but selective. Independent and inclusive. There are loads of events listed on it but none are uninteresting or trivial. It really is everything you need if you want to keep an eye on what’s happening in the world of against-the-clock pushbikes.

On the road there’s the controversial Tour Of Beijing (this is an old post and the linked content no longer exists) starting on October 10th. Why is it controversial? Well, without wishing to land ourselves a lawsuit it’s something to do with the past President of the UCI (Pat “Controversy” McQuaid) setting up a separate company to run the Tour of Beijing. Jobs for the boys and all that.

Anyway, the current UCI bosses have now deemed that the Tour Of Beijing is an undesirable fixture in the calendar so the 2014 Tour will be the last ever edition of the event. Whoever wins this year will be the final ever champion. Which is something of a mixed claim to fame but a claim nonetheless.

October sees the start proper of the cyclocross season. Both the international scene and the British national scene kick off this month. 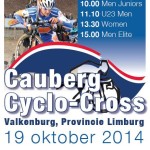 Round 1 of the UCI Cyclocross World Cup (this is an old post and the linked content no longer exists) is on October 19th in the Netherlands. The annual Cauberg Cyclorross Cup is the basis for this round of the World Cup in Valkenburg. The 2014-2015 ‘Cross World Cup is especially interesting for us Brits this year because the UK is actually hosting a round of it – in glamorous Milton Keynes no less!

Round 1 of the British Cycling National Trophy Cyclocross Series (this is an old post and the linked content no longer exists) takes place on October 12th at Shrewsbury Sports Village. Cyclocross is having a boom time in the UK at the mo so the series this year should be full of bulging race numbers and high stakes racing. Get yourself down to one and watch the messy glory.

Keeping with the off-road theme, the first weekend of this month (October 4-5th) also sees the fifth and final round of the PMBA Mountain Bike Enduro Series (this is an old post and the linked content no longer exists). Taking place over the hill from us in Bacup, Lancashire it’s a “timed stages” format race that takes in two locations over the course of the weekend – Lee Quarry and Cock Hill. There is a “mini” version of the event taking place on Sunday that just involves Lee Quarry.

Another Lancastrian bike race is The Rake Hill Climb (this is an old post and the linked content no longer exists). An infamous hill climb sufferfest where masochists sprint up a comically steep road in Ramsbottom. Held on October 12th this year. It’s a great race to watch (and heckle).