What’s so special about this one day race in northern France then?

Often referred to as the Queen of the Classics or the Hell of the North it’s revered by almost all cyclists.

Cobbles. Lots of them. 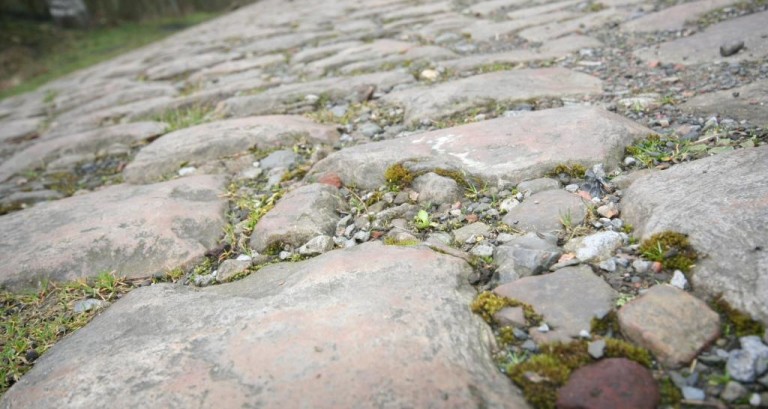 Cobbles –imagine hitting this loose, uneven surface at 50kph with well over 100 cyclists for company.

The 254km route contains 27 sections of cobbles totalling 52.6kms. Each section is named and numbered so the riders can count them down.

The first section comes after 98kms of racing and from then on it’s a relentless mix of road and tracks until the finish in the famous outdoor Roubaix Velodrome.

Cobbled sections range in length from 300m to a bone jarring 3.7km and no two sections are the same in length or surface. These aren’t your evenly spaced driveway blocks; they’re a real hotchpotch. Collections of stones roughly pointing in the same direction. The sloping sides that help drainage add even more difficulty to the task of cycling along them.

Anyone trying to ride along the gutter either side to escape them is usually riding in mud. The crowds at certain sections mean there is no room to ride in the gutter anyway, so this forcing riders to stay on the cobbles.

The race a test of skill as much as a test of stamina. Lady Luck also plays a large part; mechanicals and crashes are commonplace throughout the race.

Of the 27 sections, one stands out and it is often a deciding factor in the race – Wallers-Arenberg or simply Arenberg.

This 2.4km section comes after 158km of racing and is considered the spot to see the race pass by. The stones here are vicious. The tracks pass through the forest, over the old mine workings which have caused dips in the surface.

The slight rise in the middle section can be heart breaking as you can’t see the final kilometre of it until you’re pretty much on it.

With 94km to go after Arenberg, the race may not be won here but it can be lost. If you want to see the action close up and get a real taste of why people love this race, go here to see the mayhem on race day. The buzz is incredible. 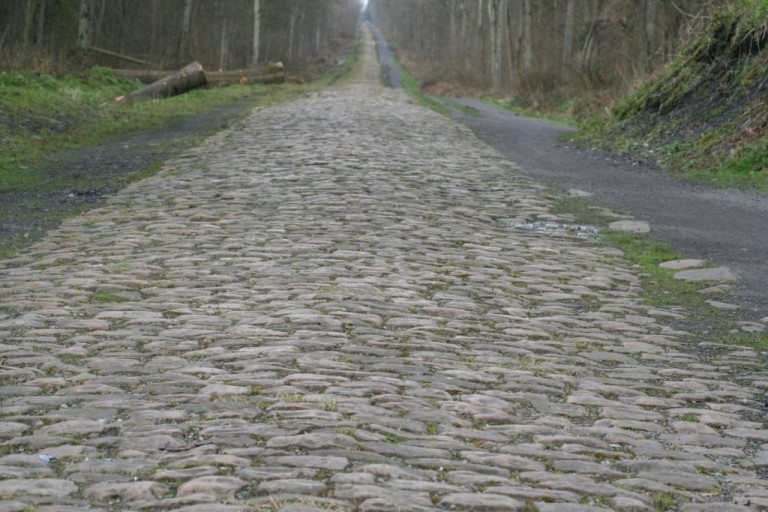 The Arenberg section – 2.4km of cobbled fun, the sides are barriered off on race day.

Cobbles are difficult enough to ride in the dry but when the weather is bad they turn into a mix of mud, gravel and slime which makes the race a real lottery.

Don’t forget – you are also in a closely packed bunch of well over 100 riders doing 50kph. That’s after a fast opening sprint to make sure get on the section at the front to stay out of trouble.

This has also got to be one of the only races of the year when spectators actually like foul weather. We know it sounds ridiculous for cycling fans to not like sun but Paris-Roubaix has been run in some of the most atrocious weather conditions imaginable.

Since the race’s inception in 1896, weather has always played a large part in the outcome of the race helping some and hindering others. In bad weather the riders all become indistinguishable under layers of caked mud and grime and the bikes take a real beating.

One of the most endearing beauties of this race is the fact that you can transpose old black and white pictures on to current scenes and the modern bikes and kit are obscured by the filth but the scenery and expressions are the same throughout the ages.

The same can be said for Paris-Roubaix spectators. Go along to see it pass and you will understand just why it is so special.