There’s an infamous sportive that takes place in Cumbria every May. Its length sounds bad enough but it’s the amount of climbing – and the steepness of the climbs – that’s the real killer. How on earth do you prepare for such an ordeal? This is how.

The Fred Whitton Challenge is generally accepted to be the hardest sportive in the UK. Although its 112 mile (180km) length doesn’t sound too bad, the 12,959 feet (3950m) of climbing most definitely does!

The route passes over all the daftest road passes in the Lake District. Some of the gradients touch 30% in places. Yes, thirty per cent. Ouch. There’s no rider who doesn’t feel broken by the end of it. 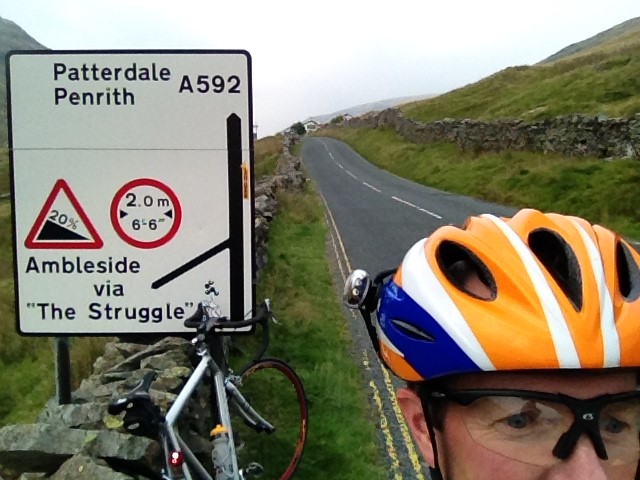 My first attempt of the Fred Whitton was 2013. I completed it in 7 hrs 58 mins in awful weather. 2014 was a disaster – I broke my collarbone during training, moving at walking speed in the wet on a Lanzarotte pedestrian crossing!

My view is that you need to do the dark, nightime miles over the winter to build up a base. The month of May comes around quite quickly. I’m a fell runner and I have similar experience from the epic Bob Graham Round which needs the same sort of preparation.

In January I managed 370 miles. This was a lot of 16 mile rides to, or from, work rides which occasionally lengthened to 27 miles if I ventured over the hills from Kendal and up the west side of Windermere to Ambleside.

I was riding a disc-ed Genesis Croix de Fer with a Hope 4 head torch and rear light. I love Hope lights. They’re also brilliant for nightime fell running. My older Hope 4 is still using the original battery from 6 years ago. Hope’s after sales service is second to none too. On Monday nights I would do a 27 mile loop up and around Thirlmere.

A modest 224 miles leading up to an overseas training trip. Concentrating on a couple of longer distance rides (see below) and on strength building but no real hills yet.

Ramping it up. Including the Eden Valley Epic Sportive and a training trip to Tenerife.

Lessons learned so far: I don’t drink enough (I carry it but don’t drink it!) and I need to stand up more, spin more and not just crank out big gears.

I hired a bike from Playa de las Americas Bikepoint for £75 for six days. This is well worth the cost compared to packing your own bike in my opinion. It was a BH Sphere with Shimano 105 34/50 chainset and 11-32 cassette; excellent for the huge hills.

You really need to be hill fit before going to Tenerife. The only way is up! We did meet a few people quite fazed by the climbing. The island has a road running over its top rising to 2300m. It’s good enough for Sir Bradley and many other pro-teams. Generally the road surfaces are very good and the motorists are respectful to cyclists. 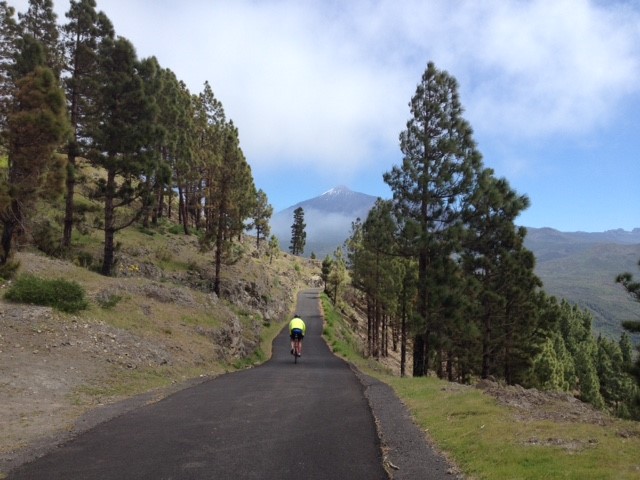 Day 1 – orientation, collecting and tweaking the bikes. 53 miles and just 2,685ft of climbing.

Day 2 – proper breakfast of porridge and honey and poached eggs. Then 108 miles and 15,632 ft of climbing – including our first ascent of Mt Teide.

We headed out east. After some difficult in-town navigation in Granadilla we were eventually up on to the ridge road running west to Mt Teide. My first gel came at 60 miles. Lovely ridge road and stunning views.

English voices talking behind us and an explosion of air as two guys shot past us in true Mark Cavendish-style. It was the British Track Team. Impressive.

We paused at the summit  to don what little clothes we had (Buff, windproof and skull cap) for the teeth chatteringly superb descent back down to the coast. An excellent challenging day, just what I was there for.

Day 3 – 51 miles with 5,584 ft of climbing, recovery ride. Feeling good. West coast to Los Gigantes with a steady climb up to Santiago del Teide. Nice lunch, a steady climb out, then a great descent on very good tarmac with great car drivers back to base.

Day 4 – 67 miles with 8,274 ft of climbing. Teide Part 2. Started the day blowing up our kettle. Then we were off on the TF82 road to Guia de Isora, then Chio and right on the Tf38 (superb tarmac) to the Teide Plateau. There was just one section that is truly awful and will shake your fillings out. Not sure how but we didn’t puncture! Back down to Vilaflor and a good cafe where we encountered a group of climbers from Kendal – we climb at the same wall! Bizarre. All finished off with a superb descent to Granadilla. Another day done, enjoyed thoroughly.

Day 5 – 62 miles with 8,887 ft of climbing. Teide Part 3. A beast of a short ride from our digs to La Camella. Then Arona, La Escalona and Vilaflor. 24 degrees plus and no wind. Hotel Parador for a hotdog and a lemonade. And a big bill. A cold windy descent back to Vilaflor (great cafe again). Then out for a Chinese and to watch others dining from Burger King’s skip (long story!)

Day 6 – 54 miles with 6,493 ft of climbing. Very windy and the temperature down to 13 degrees. We decided against dropping down to the north coast but found what we thought was a small cut through road from the top to the west. The cloud was down, the single track road was absolutely superb tarmac, pristine. the switchbacks were very reminiscent of Hardknott Pass.

It ended at a radio mast. Blast! But great training nonetheless.

We turned around and headed back down to sit inside a cafe, have a couple of coffees and a burger and warm up. Then  back to our digs, where it was a lot warmer and the pool beckoned. By now we were doing small sprints, out of the saddle and aiming for road signs or some other way point.

Day 7 – 24 miles with 2,329 ft of climbing. Quick blast before it was time to return our bikes back to the shop. It was Sunday and we got caught up with a Spanish road club who decided to aim for us whilst climbing a mountain road. My pal was having none of it. Testosterone kicked in, we passed them, they passed us and so on. Slowly they fade away to two and then they stopped at the top – wimps! LMF had kicked in (Lack of Moral Fibre). Back for a full English breakfast then later a full roast lunch before flying home. An excellent trip.

For a decent trip to Tenerife you need to be hill fit first. Don’t go there to get hill fit. That’s my view anyway. To get the most out of it and enjoy it without unnecessary pain, go there with good miles under your belt.

I rode again a couple of days after returning home. It was only 19 miles – albeit via the Kirkstone Pass! It felt good. I’d cheated though; I’d had a leg massage from Darran Harris at Kendal Physiotherapy centre. It seriously felt like having a new pair of fully cycle proofed legs! Superb. It was well worth the money and is something I would have again – it’s like having your car serviced but your body is even more valuable.

60 miles with 3,310ft of climbing, ridden with 900+ others in glorious weather. I rode it on my lighter bike, wondering what my speed would be like after all that hill training. The resulting top 50 place seemed okay. No one passed me and I was noticeably climbing better than others.

I finished March with a 24 mile Thirlmere Loop and a 61mile Langdale – Wrynose attempt. I say ‘attempt’ because I got blown off the bike twice and turned back! I ended up going via Blea Tarn, Langdale, Red Bank, Thirlmere, Grange-in-Borrowdale, Portinscale (cafe stop), St Johns In the Vale, Thirlmere and Ambleside.

So far The Fred Training has been going well. It was possibly time for N+1 ie. a new bike. Titanium with discs. I love discs.

17 ish mile rides to and from work with Kirkstone Pass thrown in each way. Once a week rides home via Shap finishing up and down Kirkstone Pass (a 44 mile ride with 3,555 ft of climbing). 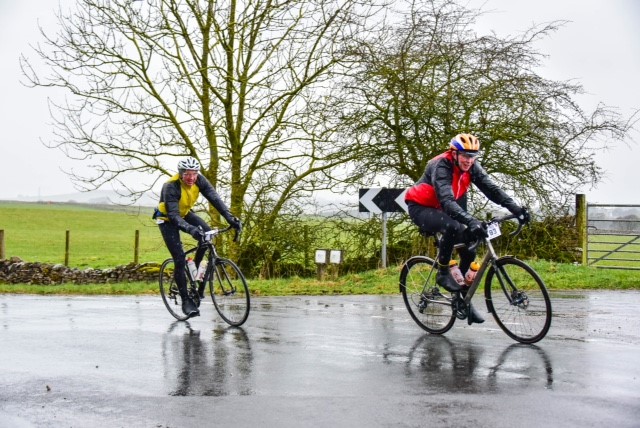 The Shap Spring Classic. 75 miles with 6,154ft of climbing. Back to winter! Rain throughout, snow and wind. I’ve survived the worst of the winter so far and The Fred was just like this in 2013. There was a lot of washed out gravel and I had to have a talk with myself to slow down and not wipe out.

Then it was down to the Dales to recce the northern half of the Etape du Dales. 63 miles with 5,279 ft of climbing with the Buttertubs and Coal Road thrown in. These seemed tame in comparison to the more savage Lakeland climbs.

I’m still not drinking enough! But I’m very much liking gel bottles. No fiddling opening gels and no littering of the roads.

Next is the 78 mile Lakeland Loop, the last big sportive before the Fred.

Then it’s steady away until May 10th and The Fred. I’ll try to learn to force more drink down. I’m feeling good. But possibly in need of one more leg massage.

25th April – 75 miles and 6,896ft of climbing. A version of the following day’s Lakeland Loop but with a  look at the subtle differences on the Fred. I only drank 2/3rds of a 500ml bottle and a cup of coffee at Dalegarth station but Strava reads 64 PRs for this ride so maybe it wasn’t as bad as it felt!

26th April – the 78 mile Lakeland Loop day. The weather was beautiful and the forecast had changed again. Only a possible two big rides left before the Fred now.

28 April – 19 mile gentle ride to Grasmere, up Red Bank, down Langdale and up and over Blea Tarn. The debate over tapering or training has started. My training partner says to stop riding with one week to go. Another pal, just back from Liege-Bastoigne-Liege reckons to stop two weeks before? I’ve tried reading up on the subject and am still not not sure but it looks like I’ll slow off now and then properly stop riding a week before. Though I did set off on this “gentle 19 mile” ride and had a guy ride across the roundabout in front of me. The red mist came down – “chase!”. The mist cleared and I let him go and carried on with my spinning.

29 April – Steady 24 miles up and around Thirlmere with a triple puncture. Get one of those on The Fred and your time is shattered. I now need to check and replace the rim tape on my spare bike wheels, as the tyre was clean.

Are you doing The Fred? Have you done it before? Please leave a comment below with any thoughts or advice you may have.

One comment to “Prepping for the hardest sportive in the UK”