An in-depth look at the Kask Vertigo 2.0 – one of the best all-rounder helmets currently available.

Where did Kask come from? If you’d asked people about Kask helmets a few years ago chances are they’d just look at you and say “eh?” Kask’s story is relatively short but it’s still rather impressive. In fact it’s impressive because it is so short. 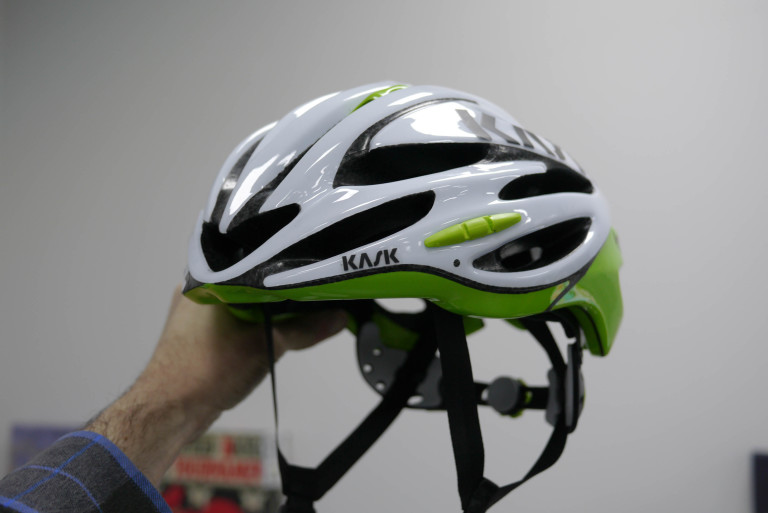 Kask are an Italian manufacturer of helmets who came into being in 2004. So they are but mere youngsters in a cycling world that’s full of historic and prestigious brands. Often in cycling, it’s hard to get noticed as a new brand. It’s all too easy to go on about history and nostalgia as a way of promoting your wares.

If Kask are one thing it’s uncompromising. They don’t compromise on protection, adjustability, comfort or durability. We even think they haven’t compromised on looks – unlike some high-end helmets which end up looking rather ugly.

This uncompromising stance does mean that Kask helmets ain’t cheap. Well, they aren’t particularly expensive compared to similar quality helmets from other brands. What we should say is, they don’t do cheap, nasty entry-level helmets. Kask only cater for the mid- to high-end market.

If it was one thing that boosted Kask’s profile it was being chosen by Team Sky to be their official helmet provider. Team Sky are renowned for being perfectionists – marginal gains and all that – so their decision to go for Kask helmets was the best bit of advertising that they could have possibly wished for.

Speaking of which, it was the original Kask Vertigo that was the first helmet that Team Sky raced in. There is now a revised version of that helmet, the Kask Vertigo 2.0, which is what we’re talking about here. 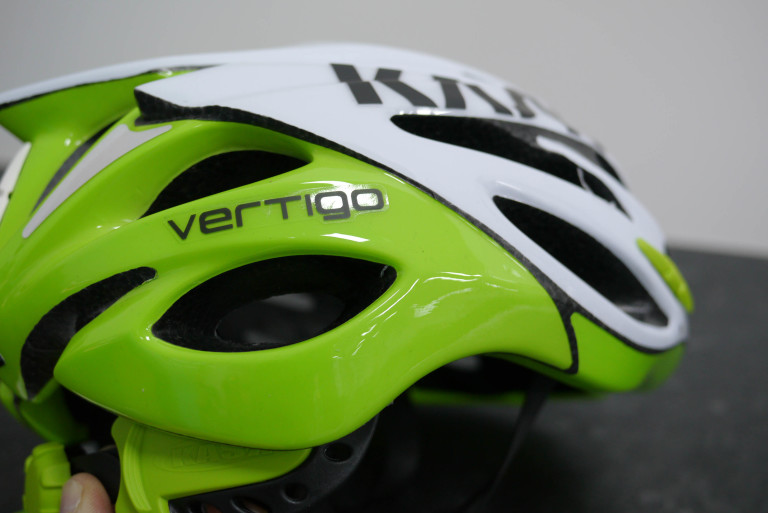 Kask have a reputation for excellent fit and minimal exposed polystyrene. What’s so good about covering up polystyrene? Well, in an aesthetic sense, exposed polystyrene quickly gets dented and scraped no matter how carefully you seem to look after your helmet. The other bad aspect of exposed UV is that it is susceptible to premature ageing due to exposure to the UV of sunlight (aren’t we all?) 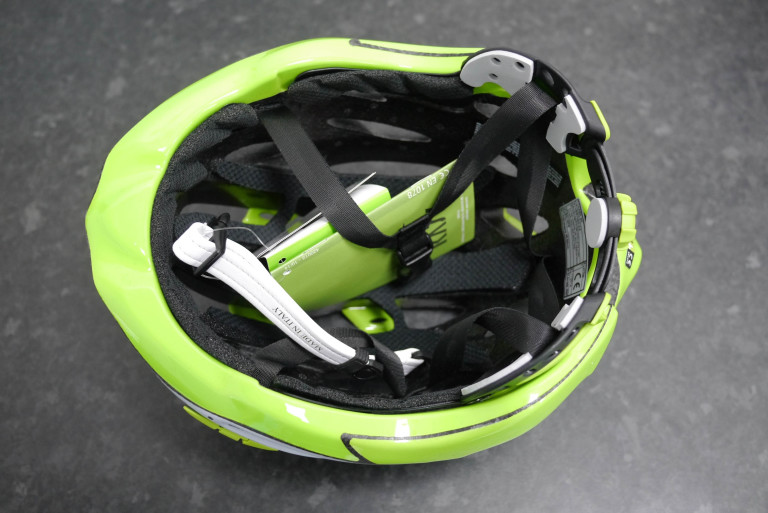 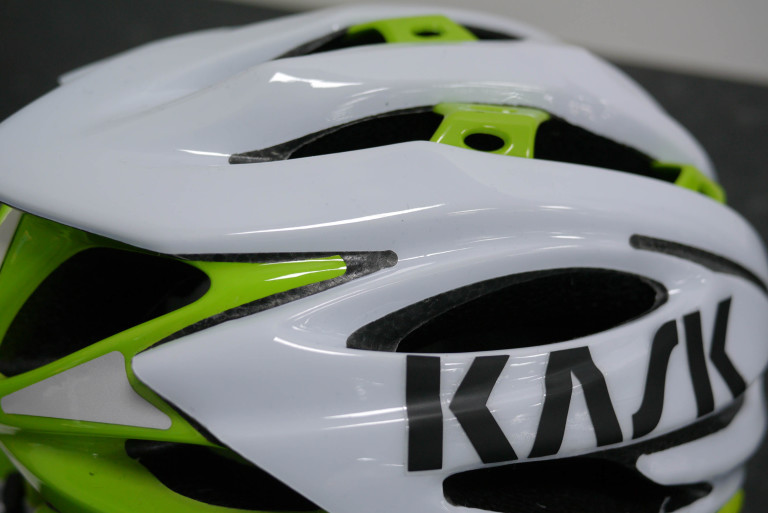 Doing the outer shell in several pieces allows them to design helmet shapes that couldn’t be covered by a single piece of shell.

And there are design features things you can’t see too. The polystyrene body of the Vertigo 2.0 has a skeleton inside it. Not a real skeleton. A reinforced plastic frame that keeps the helmet together even in dramatic or repeated crash impacts.

Regarding coverage, the Kask Vertigo 2.0 offers a large amount of head coverage for such a lightweight helmet (the Vertigo 2.0 weighs 270g). Like a lot of their range, the Vertigo 2.0 sits quite low on the forehead and covers quite far down the back of the head too. 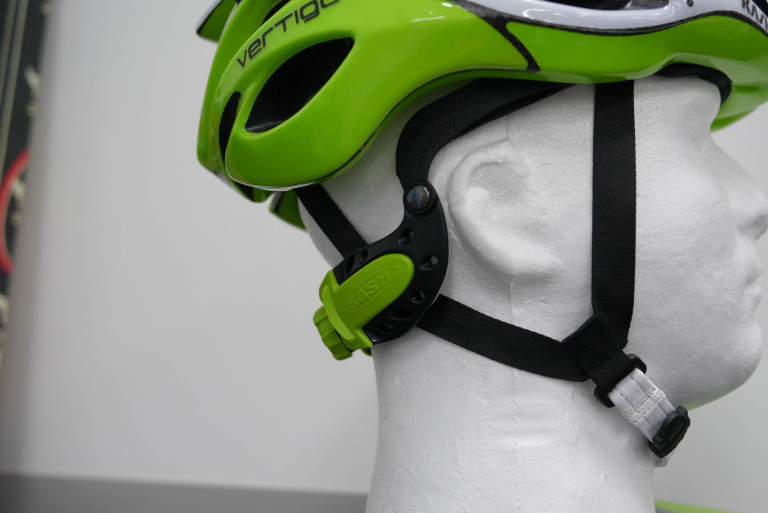 Perhaps the best thing about the Vertigo 2.0 is how it is held on to your head. The rear retention system and the ear-and-chin straps are a bit different to all other helmets. These areas have traditionally been easy targets for cramming in a bit of weight saving. Not so with Kask.

Kask could have made the Vertigo 2.0 even lighter by going with basic slide-anchor adjusters for the ear-and-chin straps and a skinny framed rear retention system. But they didn’t. They didn’t want to compromise on comfort and secure fitting. Kask have built up a strong reputation for fit and they don’t want to lose it for the sake of weight weenie-ism that no-one really cares about any more. 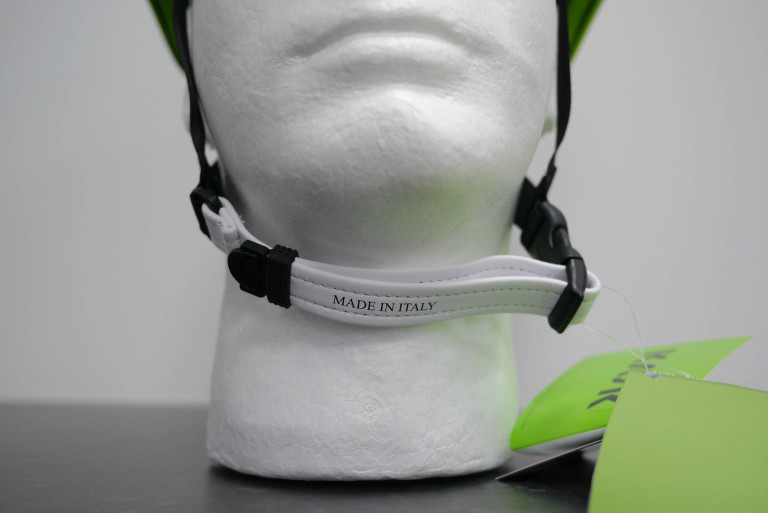 The Vertigo is different to most helmets in that its chin strap is an entirely separate piece of material to the side straps. Why do they do this? It’s partly so that they can get the side straps to lie nice and flush against the head and partly so that they can use a different material for the chin strap. The Vertigo 2.0’s chin strap is made from eco-leather which is very comfortable against the skin, anallergic and washable. 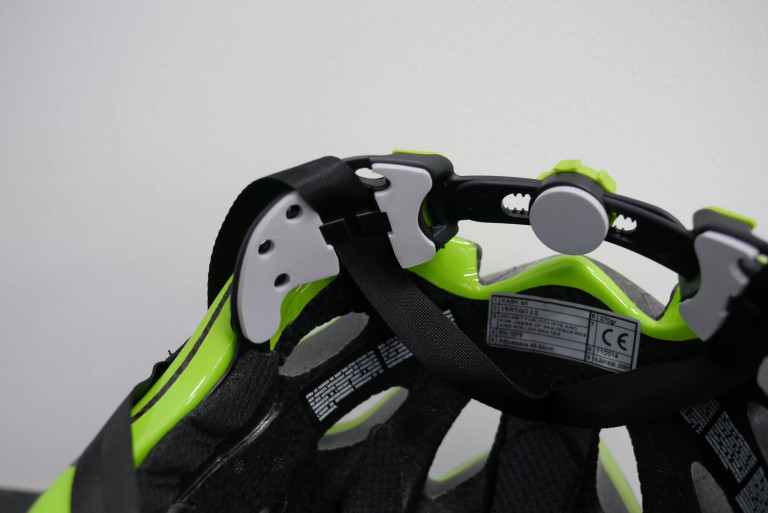 Kask’s ‘Up & Down’ rear retention system is unique. It’s a double pivoting design that makes it adaptable for an unrivalled variety of head shapes. You can place the hugging points exactly where you want them. And the gel pads on the retention band really keeps things in place securely. 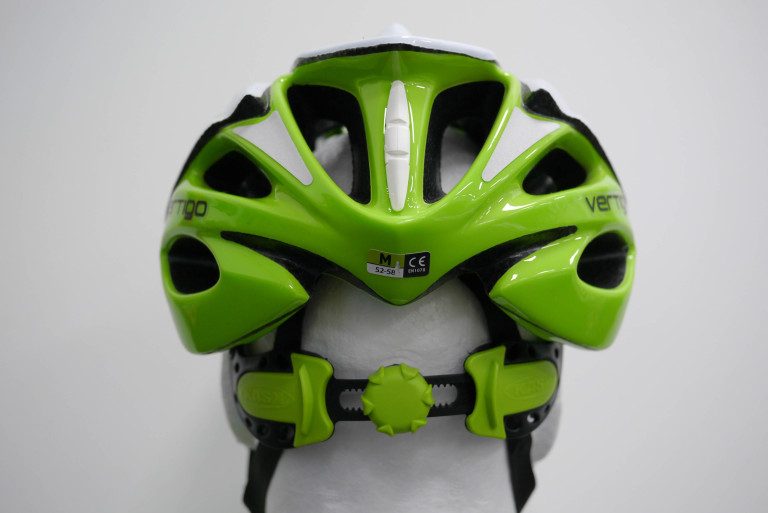 A lot of Kask users set the retention band to sit really low and under the back of their heads, a location that can’t be achieved with other retention designs. 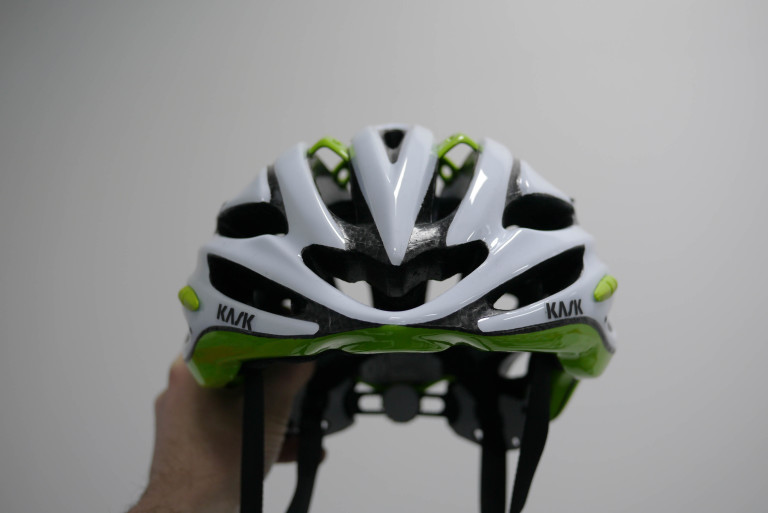 These days you can’t seem to make any cycling product that isn’t aerodynamically focussed in some way. So it is with the Vertigo 2.0 which is an impressive aero performer despite also being covered in effective cooling vents. With helmets usually you have to choose between being aerodynamic or being cool. Not so with Kask. 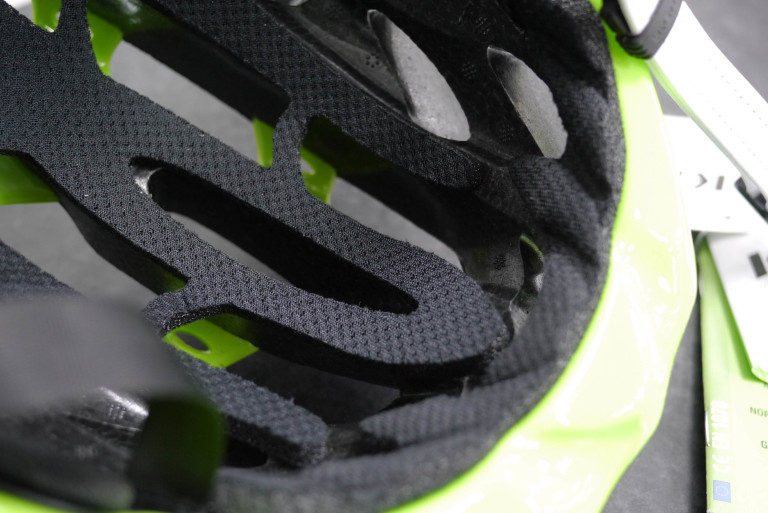 Speaking of cooling, the internal padding of the Vertigo is a mixture of Coolmax and honeycomb-style foam. This does a good job of wicking away sweat and getting it evaporated away as swiftly as possible. The pads are antibacterial and anti-microbial treated too.

If you find the helmet a bit too cool during winter – and you very probably will because it is such a well vented helmet – then there is a helmet liner available as an optional extra.

How it’s made video