The weekend of Saturday 9 & Sunday 10 August saw the streets of London and Surrey turned over to cycling and what a success it was. There were four different events over both days with more than enough going on to keep cyclists and spectators entertained.

Saturday was all about London as the FreeCycle and Grand Prix criterium races both which took place around some of capital’s most iconic landmarks. The FreeCycle event saw 8kms of roads closed to vehicular traffic for the day allowing an estimated 60,000 cyclists to enjoy the city centre at their leisure.

The one way system with many entry and exit points meant people could pop in and out as they pleased and with five different festival areas on route there was plenty of cycling related activities to watch and take part in. 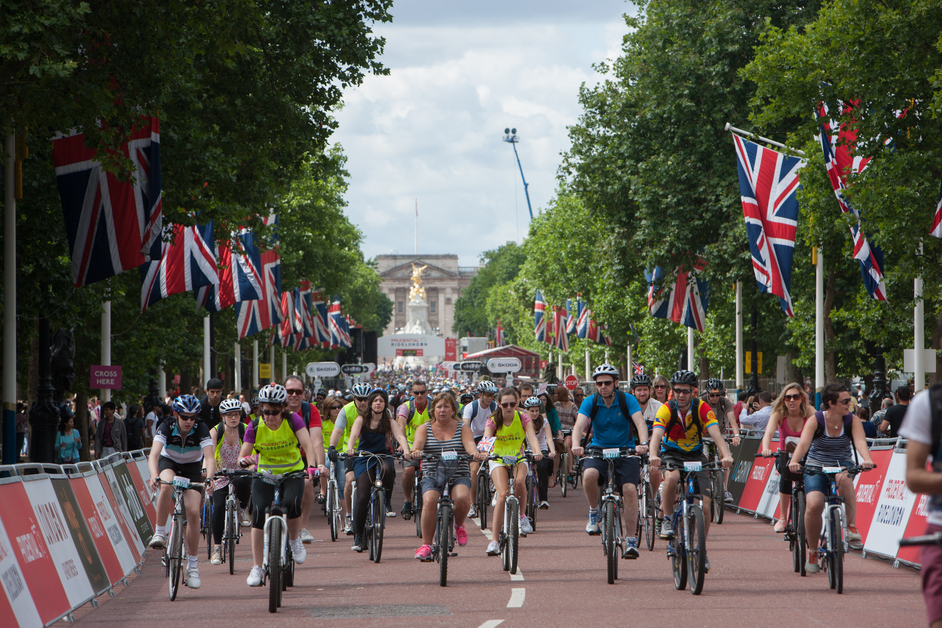 The glorious sunshine no doubt helped swell the numbers and it was great to see so many families and children taking advantage of the closed roads to cycle round London.

The Grand Prix races on Saturday afternoon saw a host of support races and some of the best female cyclists in the world take part including Olympic and multiple World Champion Marianne Vos who made the journey from the Netherlands for the event.

Taking place at 5.00pm after the FreeCycle event had finished meant there were plenty of spectators round the city centre course and at the main festival hub in Green Park to watch the event on the big screen.

The one hour race saw plenty of action and Merlin Cycles’ very own Bex Rimmington took part which you can read about here. 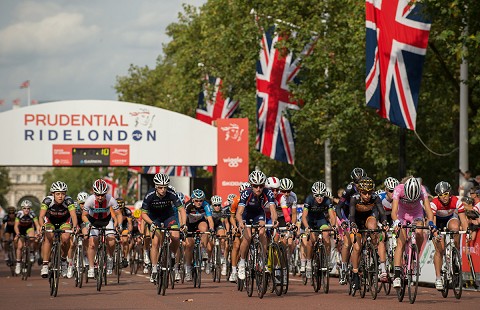 Our Bex is in there somewhere!

Sunday saw the London-Surrey 100 closed road sportive take place in the morning followed by the men’s professional race, the London-Surrey Classic in the afternoon; the pro’s event may have been longer but at least they had it dry!

Sunday morning dawned grey and damp for the London-Surrey 100 with the impending threat of hurricane Bertha lashing the event later on in the morning.

The first riders got underway from the Queen Elizabeth II Olympic Park at 6.00am in the dry and over the next couple of hours over 22,000 cyclists started the event.

With the threat of bad weather the organisers made the wise decision to cut out the climbs of Leith and Box Hill and so the ride was shortened from 100 miles to 86 miles.

It was great speeding through the capital with fully closed roads and wasn’t long before we were out into the Surrey countryside. Unfortunately this is also when the expected foul weather hit and boy did it hit.

Rain was absolutely pelting down and roads were quickly flooded making conditions treacherous with literally hundreds of punctures. It was now that most were thankful that the climbs had been taken out as the narrow roads near the climbs would have been hectic.

At least it meant the legs were fresher and once past the bottom of Box Hill at Dorking it was a tail wind practically all the way to the finish. The rain continued to lash though but it wasn’t long before we were back into London again past all the iconic landmarks to the finish on The Mall.

The organisation was impeccable with fully closed roads the entire route and with supporters and spectators all the way round cheering every entrant no matter what speed they were doing; it really was uplifting and made the 86 miles pass very quickly. 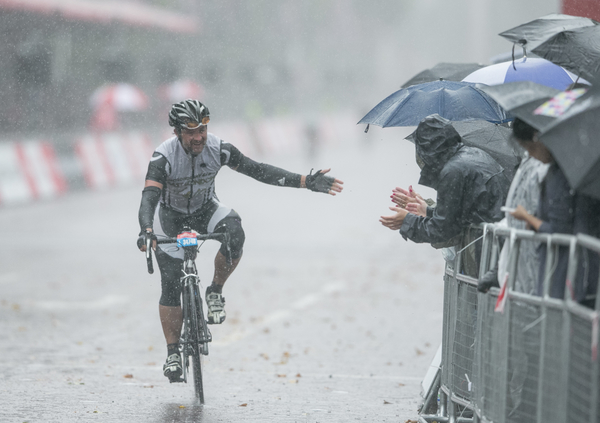 This pretty much sums up most riders’ experience on Sunday

The London-Surrey Classic saw some of the world’s best male professional cyclists take to a similar course as the sportive but with a few climbing laps around Leith and Box Hill thrown in for good measure to bring race distance up to 200kms (125miles).

Star of the show was our very own Sir Bradley Wiggins (Team Sky) making one of his rare appearances on British roads alongside former world road race champion and Classics star Philippe Gilbert (BMC) Wiggins rode in support of team mate and fellow Brit Ben Swift but Gilbert was out to make his mark on the race and so it proved.

After the day’s early break was pulled back by Sky, Gilbert attacked and took a select group with him and opened a gap. Despite the best effort of team Cannondale, Gilbert’s group stayed away until the finish where another Brit Adam Blythe (NFTO) took the biggest win of his career from Swift in a close sprint to the line in front of Buckingham Palace.

All finishers looked like they had been in a race and although it was relatively dry for the race they were filthy from flooded roads, Blythe looked like he had been in a cyclo cross race, or was he cleverly sitting on the right wheels all day… 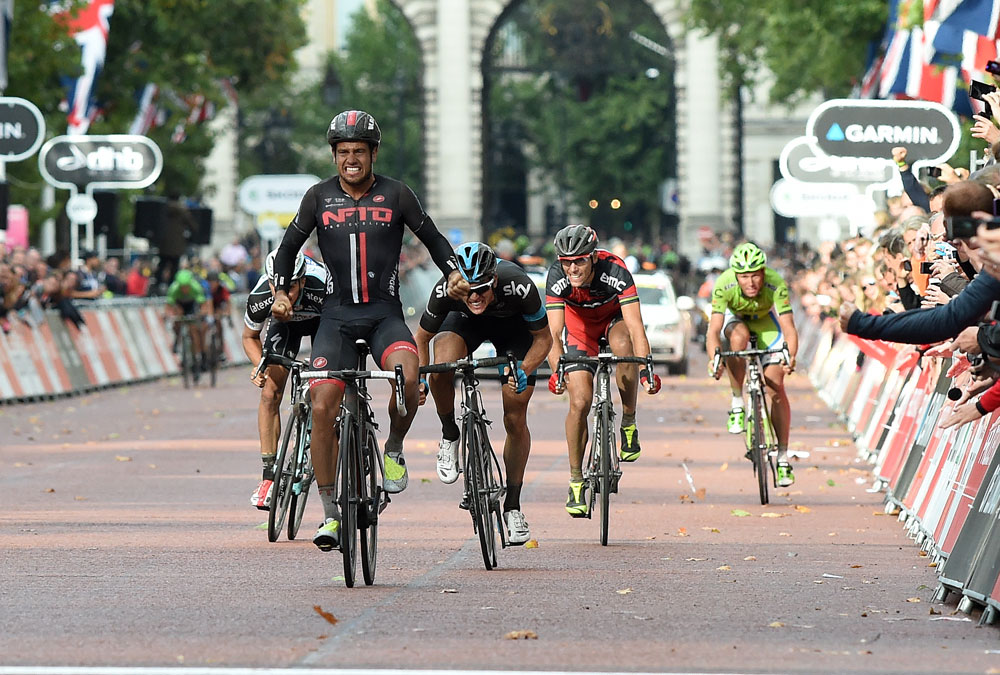