After the overwhelming success of the Grand Depart of the Tour de France in Yorkshire this year it seems the race’s organisers ASO have really taken to ‘God’s own country’ with the announcement of a world class three day stage race there from 1 – 3 May 2015.

Legacy of the Grand Depart

Part of securing the start of the Tour was that there should be a legacy in place for cycling for years to come, not just everything for the few days that the Tour was in the UK.

Yorkshire delivered for the Tour and now ASO has by bringing the professional peloton back to the parts that didn’t make it into the Tour this year.

The Tour de Yorkshire will be a three day race open to elite men’s professional and national teams with 2.1 international ranking placing it just below the Tour of Britain in importance.

There’s also talk of an elite women’s one day race taking place at the same time but the organisers are remaining tight lipped on that. In true UK style there’s also mass parturition sportive planned as part of the event as well. 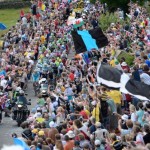 Will we scenes like this (left) again at the Tour de Yorkshire?

The full routes will be released in early 2015 and will probably visit some of the iconic parts of the Tour de France route such as ‘le cote de Buttertubs’ and Holme Moss but more importantly for Yorkshire, the parts the Tour couldn’t visit simply due to logistical reasons.

This could see York, Scarborough and Hull get in on the act this time as the race will not be such a huge operation and these locations can easily support the smaller race contingent.

The three full days format also suggests there will be no time trials so expect some long stages with plenty of stunning scenery and action on the tough roads. There’s even speculation that the infamous 33% climb of Rosedale Chimney Bank has been assessed for possible inclusion, how big are the crowds going to be on it and how spectacular the images if it happens?

No teams or riders have been announced yet but coming just before the start of the Tour of Italy and in a quiet weekend in the international calendar it should attract some big name riders.

One thing is for sure, it’s going to be a tough race and if the spectators come out again, a quite memorable spectacle for everyone taking part and watching.

Keep up to date with details at letour.yorkshire.com