Is this the best mountain bike race on the planet?

If you hear of a bike event that’s 300 kilometres long and packs in 9,000 metres of climbing, chances are you’d think it was a cross-country marathon sort of event. The Trans-Provence is not cross-country. It crosses a whole lotta country, but it’s not XC. It’s enduro.

Y’see, not all of those 300 kilometres are raced. Most of the 300km isn’t timed. Within the 300km are 24 special stages of varying lengths. These are timed stages. These are the racing sections. A rider’s total cumulative time gives him or her their position. 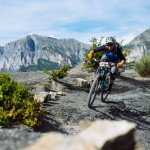 It’s these 24 timed stages where the Trans Provence is earning its reputation as one of the most iconic events in mountain biking.

Unlike most long-distance mountain bikes races which are made up of predominantly wide tracks and doubletrack, the Trans-Provence is a race that’s won on singletrack. And technical singletrack at that. Technical singletrack that racers haven’t pre-ridden – they ride it all as they find it.

To do well – heck, even to complete the Trans-Provence – requires a great deal of skill, fitness, bravery and degree of tactical nouse.

Mavic Trans-Provence is a 6-day point-to-point Enduro-style mountain bike race; the winner is the rider who finishes in Menton having accumulated the lowest total time from the 24 predominantly singletrack, predominantly descending timed “Special Stages” featured along the route.

The 3 or 4 Special Stages per day are linked together by predominantly ascending untimed “Liaison Stages”.

Mavic Trans-Provence is a solo-only event, i.e. there are no teams of two or more.

The week in video

As the 2015 is in progress we’ve assembled all the video reports from last year’s Trans-Provence into one handy page.

Be prepared to be excited – and insanely jealous! Even if you’re not bothered about racing the videos are worth worthing purely for the awesome trails and landscape. Unreal.

So, who’s going to come out top? François Bailly-Maitre won in 2014. Our money’s on previous winner Nicolas Lau. We shall see…