Last month we were lucky enough to ride the iconic Kemmelberg. Here’s our tale of what went down. 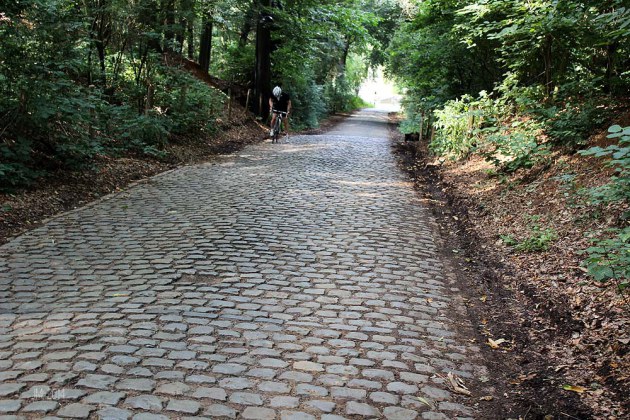 “With the 100th anniversary of World War One set to be a major factor in the route of the 2014 Tour de France, we set of to visit Ypres with the aim of riding the Kemmelberg.

“2014 will be the hundredth anniversary of the start of World War One and this has brought about a rekindled interest in the area around the long, bloody fighting line that straddled Europe. To mark the occasion the 2014 Tour de France will be visiting many of the major battlefields and stage five will begin at the Belgian town of Ypres.

“It was around Ypres where the British and the Commonwealth armies fought many of their bloodiest battles. The old fortress town of Ypres is situated in the north of Belgium and found itself the entrance and backstop of a salient that pointed a finger into and beyond the German front lines. To the north is Passchendaele and to the south is the Somme where the line runs through France via Arras to the French fighting pivot point of Verdun, to the south of Paris; each location now synonymous with the horrors of war. Verdun will also be a major remembrance point and will be visited by the 2014 Tour on stage seven.

“The Ypres salient was a major challenge to German military planners as it stood in defence of the potentially war winning capture of the ports of Calais, Dunkirk and Ostend. Thus they attempted to outflank and encircle the salient, whilst the British and Commonwealth armies fought not just to hold the line, but also to widen their foothold.

“For cyclists Belgium is an ‘open door’ and one of the great climbs of cycle sport is the Kemmelberg, a fearsome cobbled ascent which is situated just a few kilometres south west of Ypres, which is where we headed recently…”

Words and pics by John Mx – You can read the full account of our ride over on the britishcyclesport website.