Sharing hotel rooms with seven bikes, eleven spare wheels, two turbo trainers, a work stand, 27 water bottles, a tool kit and 72 litres of bottled was worth it. Nothing beats zooming around the peloton in a team car.

The Tour de Feminin Krasna Lipa is probably a race you’ve never heard of. I agreed to help out Team CTC by being their team mechanic for the race.

The five days that followed were a real insight into the challenging but enjoyable world of top level stage racing in a very different country.

The Tour de Feminin Krasna Lipa race is an annual 4 day (5 stages) UCI Women’s ranked stage race which takes place in the north of the Czech Republic. It’s a hard race but one that second category riders can ride as well as elites. This mix of ability is part of the appeal. There are always races within the race going on between the smaller teams. 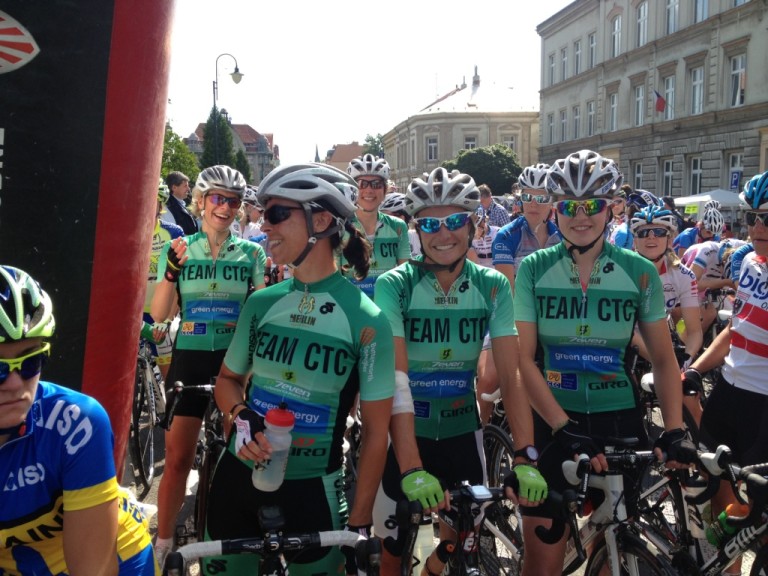 Team CTC had five riders entered so only needed one mechanic. This left the other team assistant to take care of bottles and feeds so that team manager could concentrate on logistics and driving the team car.

Being a small team everyone pitched in and helped each other wherever they could, leading to one of the best team spirits I’ve ever come across in cycling. 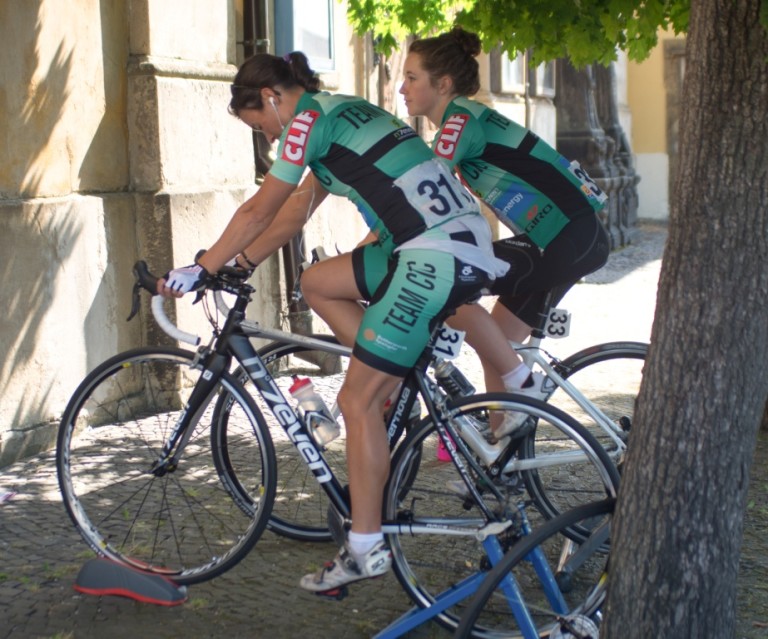 We arrived the day before the race and it was straight down to business unpacking and building bikes. Once this was done it was dinner, team briefing and bed.

As mechanic I thought I’d lucked out getting my own room but as it turned out sharing a room with seven bikes, 11 spare wheels, three bike boxes, two turbo trainers, work stand, 27 water bottles, tool kit and 72 litres of bottled water meant space was at a premium.

Up early for breakfast, pack cars and transfer to the start/finish area roughly two hours before the race start.

Bikes quickly checked,warms up done, riders sign on, bottles and food sorted, riders informed of where feed was and climbs and sprints along the route and then off to the start line 10 mins before the start time. 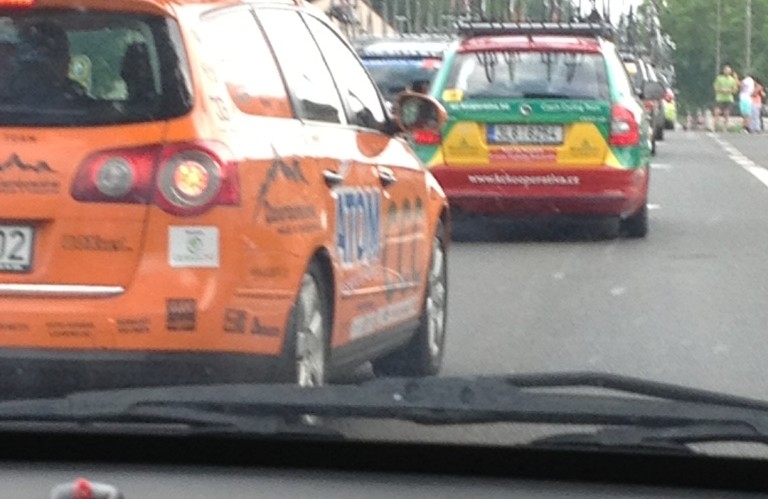 When the gun went off this was when the real excitement started.  My fellow team assistant then drove straight to the feed zone with all the other teams and the team manager and I. Loaded with spare wheels, tools, bottles and food, space again was at a premium but we had a system in place despite what it looked like.

The first 10 mins in the cavalcade were a blur of speed and horns as everyone jostled for their place in the convoy despite numbers being given out before the start. Once this settled down it was very orderly with everyone taking their place and sticking to it. 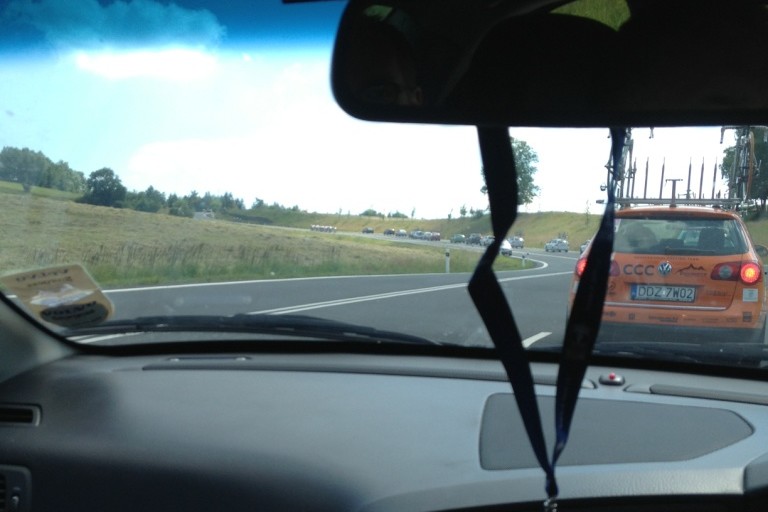 One of the most striking memories for me was each morning there is a radio check and each team car has to confirm their radio is working and they are receiving race radio. It was during this and hearing so many different languages that you realised this was a big race with a lot of different nationalities. 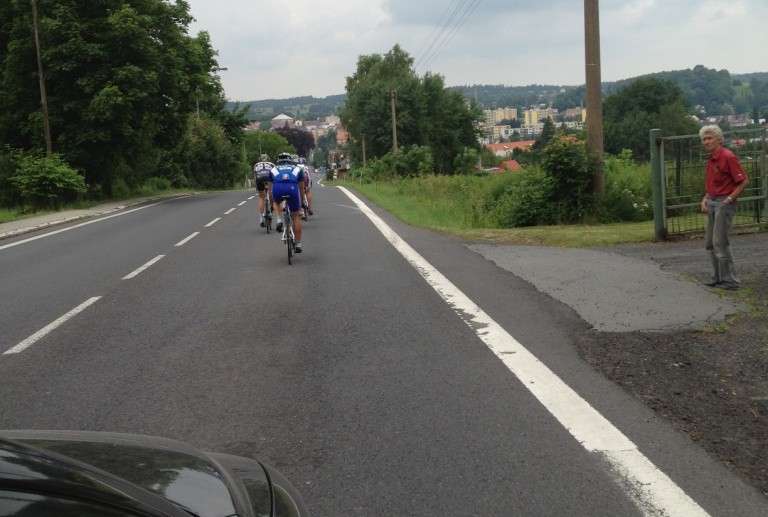 We didn’t have long until our team was called over the radio as one of our riders crashed. It was at the 10km point in the race and we didn’t know what to expect.

A high speed gravelly corner had caught several riders out but thankfully by the time we got there they had all remounted and were chasing back on. We caught up with our rider – Jeanette – who was bloodied but determined to go on.

It turned out she was pretty well cut up with plenty of road rash but stopping never crossed her mind and she went on to finish the entire race despite her injuries.

We couldn’t believe we’d had an incident already but thankfully this was to be our only such incident of the race. But getting into the team car each day you never knew what was going to happen to had to be prepared.

As it turned out our biggest concern was whether we would have to stop to go to the toilet and maybe miss a call over the radio but this didn’t happen either. 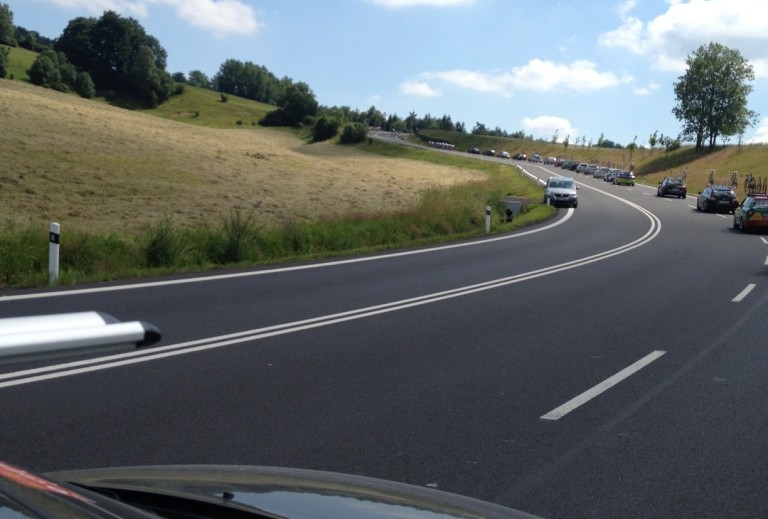 We’d have several riders in one group towards the back of the pack and several riders up in the front of the bunch. Passing our riders in the dropped groups seemed difficult at first but once we made sure they were okay they waved us on to support the front group.

It was a big blur of noise and colour and mainly horns beeping to warm of riders or cars coming through or obstacles coming up.

At the finish:  sort the riders out with drinks and recovery food, load the bikes, get back to base as quickly as possible.

With the bikes and kit unloaded it was spanner time for an hour or so to make sure all bikes were okay.

Shopping for water and fresh fruit came next followed by the team meeting to discuss today’s stage and the format for tomorrow.

Contrary to the legendary ‘night stages’ I’ve seen on other stage races this one was very quiet with all teams and personnel in bed before 10.00pm each night – this was the first time I’ve seen this happen ever!

It was early start again as the race was over in Poland about 30km away. What I didn’t know was that we were getting there via Germany!

The border was on the edge of Krasna Lipa itself and the difference in the two countries was instant to see. The German roads were better, everything was much neater and the road signs were good. Crossing a river 20km later brought us into Poland and an instant change again as the road was a lined with shacks selling cheap cigarettes. 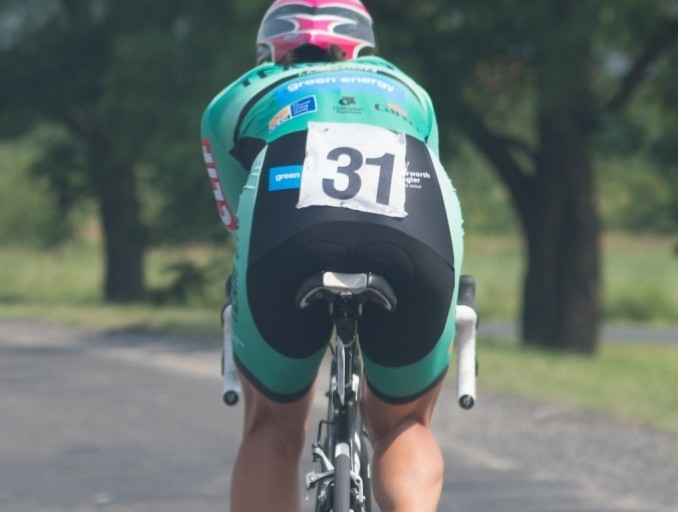 Later that afternoon it was another road stage from Krasna Lipa so at least we didn’t have far to travel after lunch and could still follow the same pre race format.

We made it to the end

All of the team finished the race, which is more than can be said for some of the bigger teams. For Team CTC it was more about finishing a UCI race really.

If you ever get the chance to help out on a stage race you should do it. The days are long, sometimes its frantic and sometimes it‘s tedious but overall it’s great fun and the satisfaction when everyone finishes is very worthwhile, knowing that you’ve helped to achieve it. 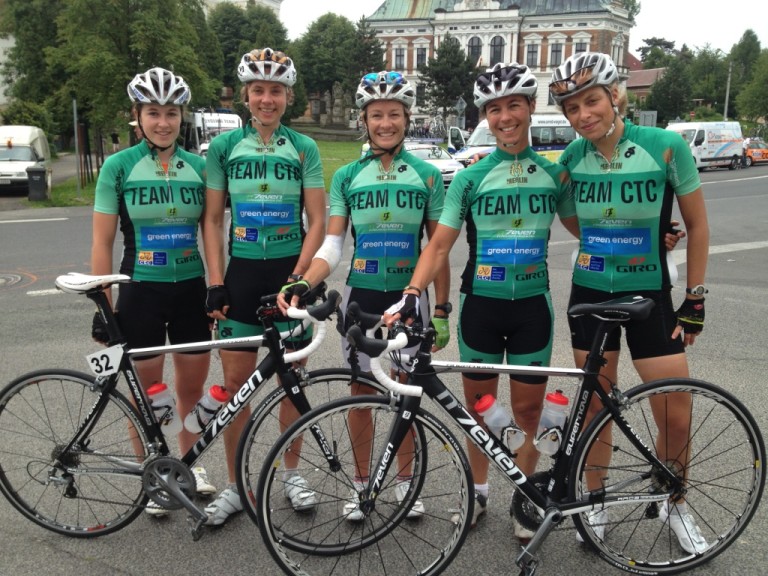 “Seeing Thomas each race and being able to catch the bottle each time. When Patrick said the last day from the car: “20km to go”.  Teaching Italian to some of you.” – Vittoria Bussi (ITA)

“Eventually joining a decent sized group after my crash and especially seeing 3 green CTC jerseys in the group. Being able to communicate with my team at all times and know exactly what’s happening and when.” – Jeanette Greenie (NZL)

“The sprint on the cobbles to the finish line on the penultimate stage. On the last stage seeing Astrid cross the line and knowing that a) the whole team was safe, and b) that every single one of us (including Thomas, Steve and Pat!) had made it through to the finish of a gruelling few days!” – Tamina Oliver (GBR)

“Crossing the finishing line knowing I’d completed my first UCI tour. Being told there was 25km to go on the final stage.” – Hannah Payton (GBR)

“On the first day after getting dropped and thinking it was all over, I got in a small group and spotted the green jerseys of Vittoria and Hannah in the group ahead and caught up with them. Even better when Jeanette managed to soon join us. Sitting down for a civilised cup of tea after the first stage.” – Astrid Wingler (GER)

“Having all five riders finish the race without any major incidents!” – Steve Bailey (team manager)

“Besides seeing everyone finish the race, being at the feed stops seeing the green CTC jerseys turn up and not missing any bottles.” – Thomas Wallenda (Soigneur)