This race is often seen as the main test for riders and the organisers ahead of the Big Race.

If there is a week-long stage race that’s seen as important to contenders at the Tour de France itself, it has to be the week long Critérium du Dauphiné stage race. 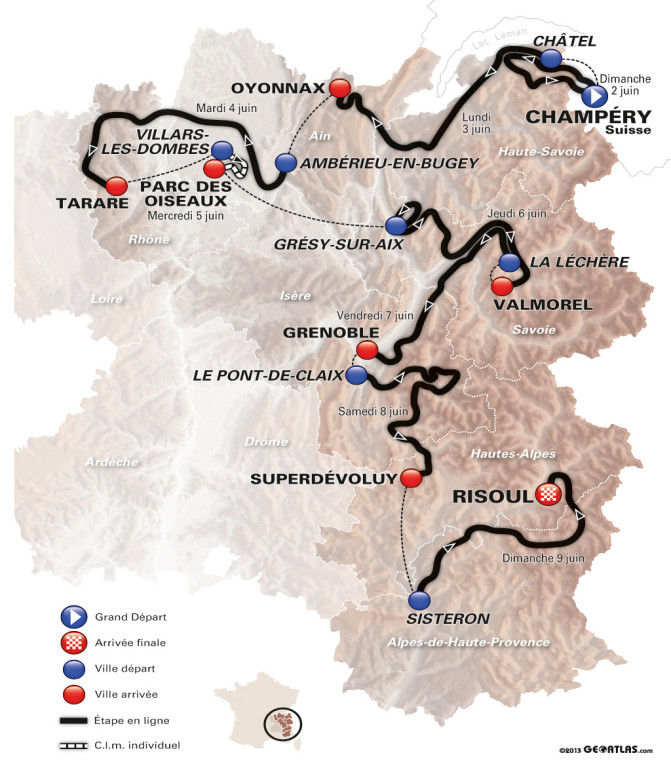 This eight day race in the Alpine region of France has been a precursor for the Tour de France since its inception in 1947.

It has a mix of stages but it’s mostly suited to climbers as it tends to be quite hilly. There’s only one short time trial. It’s an ideal final chance for riders, teams and the organisers to test themselves before the main event a month later.

It usually attracts all the main contenders for the Tour so always has a good field and exciting racing as they have a dig at each other for the first time that year to test form, teams and tactics. For riders it’s seen as the last test of form and to see who’s going well.

Damned if you do

The common perception is that if you are not riding well it may be too late to build up for the Tour but if you win it you could be peaking too soon. It’s a classic race for the over-theorising armchair pundits.

Finishing near the top end but not digging too deep seems to be the case for Tour contenders but saying that, many winners of this race have gone on to win the Tour itself.

For teams it’s a chance to see which riders are in the best shape to support the leaders and what tactics may need to be used against rival teams. Riders have to fight as hard for Dauphiné places as the Tour because riding well in the Dauphine usually means you’re riding the Tour.

The Dauphine is also a great shakedown for new and existing equipment and you’ll spot several prototypes getting an airing before wider use at the Tour. Logistics and backroom staff also get a try out as the race has the same infrastructure as the Tour.

As the race is organised by the same company who run the Tour de France – Amaury Sport Organisation (ASO) – they often use the race to try out new stage start or finishes to see how they cope. It also allows the organisers to use stages similar to Tour stages so teams know what to expect. Teams are also out to impress the organisers to ensure they get invited back next year or to justify their inclusion.