It’s not often that a Grand Tour heads north, well further north than the normal visit to Normandy or Nord Pas-de Calais in France. But this year it’s a special occasion. Not one but two of the grand Tours are heading over the expanse of water that separates the UK and mainland Europe.

The first is of course the Giro d’Italia. The “Fight for Pink” kicked off on Northern Irish soil for the very first time in history. 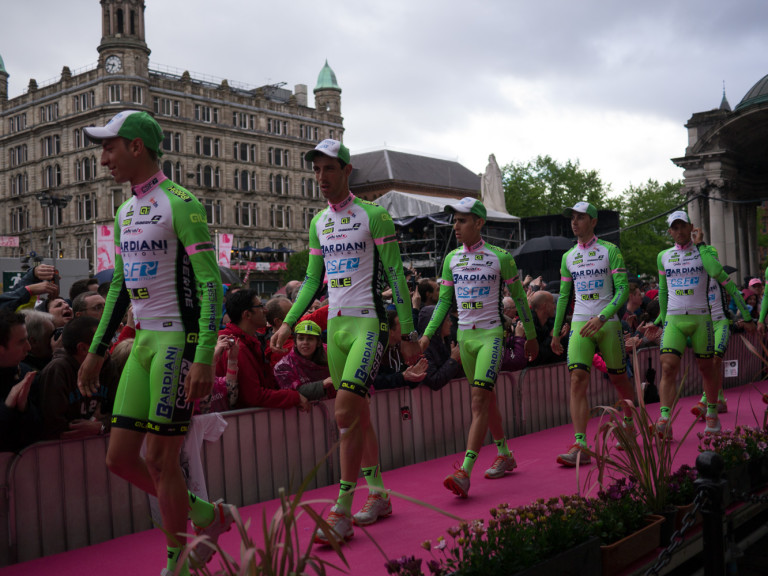 We were there to catch the action and soak up the Italian/Irish festivities while in the Emerald Isle.

Thursday saw the presentation of all 21 teams competing in the race, a huge stage had been erected in the grounds of the city hall, unlike in Leeds where the Tour de France presentation will be held, and be a charged event.

Belfast had a public lottery and a queue system, free and open to every member of the public. The place was packed, and the surrounding streets brimmed with people. Thousands of people not just from Belfast, but across the world had descended on the now very pink city.

The pink on show was amazing. Buildings, city furniture, shop fronts, even dogs and the Mayor’s hair had a touch of pink to them. Though this was just the tip of the iceberg, once out on the open roads we’d see even more pink. It was a huge surprise that the city had taken the theme so extensively.

Obviously the two main men that the Irish wanted to see was Nicolas Roche and Dan Martin, there were several other Irish riders in the peloton but these two along with superstar sprinter Marcel Kittel got the loudest of cheers when being presented to the public. 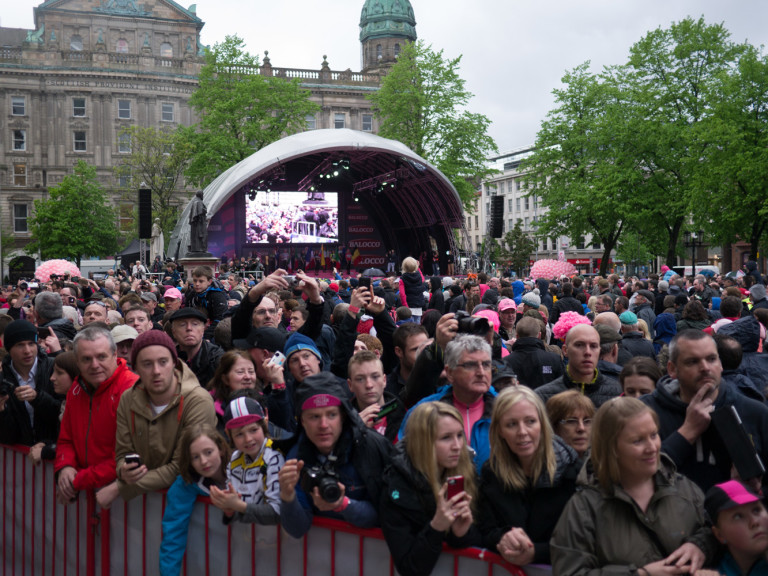 It was the race action we were all there for though. Unlike every other year where the race starts on a Saturday this seasons racing kicked off on the Friday, the reason being that the race had an extra rest day on the coming Monday. This was for the huge undertaking of shifting the race from Dublin to Bari in Italy, not something that could be done overnight.

Stage one was an evening team time trial, a 21.7km race in and out of the city. This started outside the impressive Titanic Centre, a gleaming angular building. Perfect for an epic and stunning backdrop.

The race saw some amazing action, and by now the majority of people reading this blog will know what went down. And went down is a very apt couple of words to use. The main talking point of the race was the savage looking crash of the Garmin-Sharp team. With race and crowd favorite Dan Martin hitting the deck at an outlandishly fast pace, from the video footage it looked as though he had slipped on one of the wet grids in the road.

Carbon and bodies flew all over the place, straight away it looked like a hugely serious crash. It was Dan who was clearly out for the win, however he succumbed to yet more bad luck.

After his crash in the final 200m at the recent Liege-Bastogne-Liege race that cost him a win, this TTT crash cost him not just a possible win but a collar bone. Dan along with his team mate Andre Cardoso both broke a collar bone, not a great start to the Giro for the team. This surely must have been the shortest Giro for any rider in the history of the event. 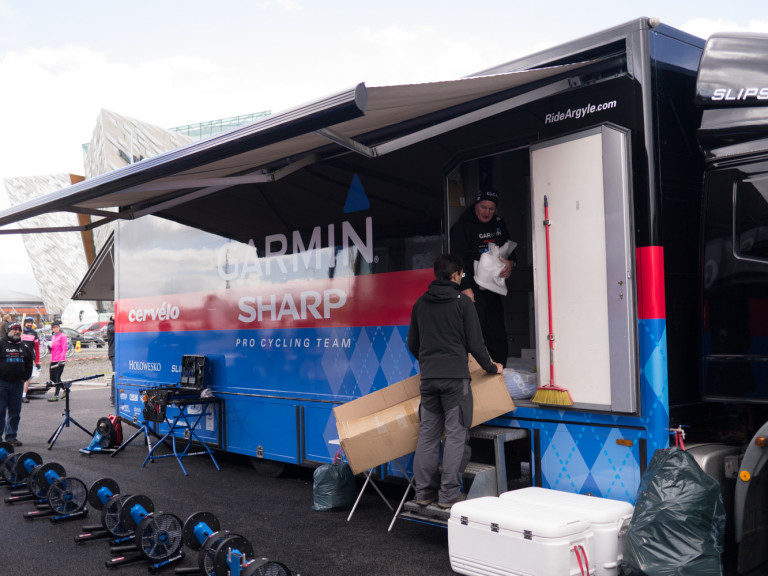 There were many interesting mini events to look out for too, from Lotto-Belisol’s terrible performance, to Katusha waving frantically at the excited crowds to tell them to get out of the road. BMC pushed Orica-GreenEdge extremely close to the win, Orica had rode out of their skin, they had been one of the early teams leaving the start gate in the evening and ended up riding in windier conditions than the later teams, this included BMC.

I spoke with several of the OGE staff in the presentation area afterwards, panic had rained on the team and several riders had it set in their minds that they had lost the day’s win in the final kilometers to Cadel Evans and his team. Clearly riders and staff were extremely happy, and to top it off the guy in Pink was Canadian Svien Tuft.

Saturday rolled round and with it many of the main streets shut down in Belfast, unlike several other European races that I’ve attended the locals had not a bad word to say about this. No moaning or whining about disrupted traffic conditions. The place had a party vibe to it.

On the start line was Svien, in the pink jersey and on a pink Scott Foil bike, speaking with the mechanic I’d found that he had received the bike at 9pm Friday night, just an hour after the stage had finished. The mechanic stayed up till 3am putting it together. It looked well worth the late night. Cameras were out and the bike was getting as much attention as the riders. 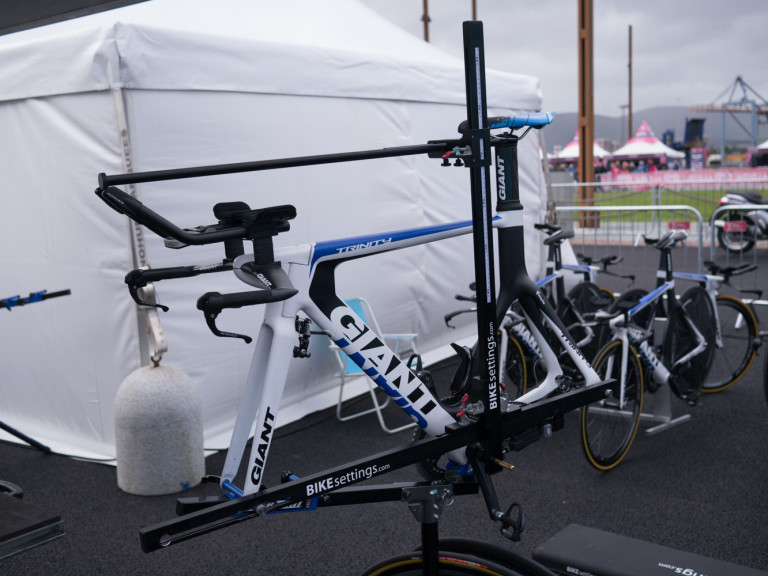 This stage went north of Belfast, straight up to the natural phenomenon, The Giants Causeway. The race took in the north east coast on the way back. Winds and rain battered the riders and made for some great looking images on TV.

As I said before, Belfast had taken the pink theme to heart and now the outlying towns that the peloton passed through were also decked out in pink. Tractors, sheep, and electricity pylons all bright and looking good in the grey day.

At the finish the crowds were amassing. When the peloton arrived the crowd went as crazy as any cycling fanatical country that I’ve visited. The banging on the barriers and the whoops drowning out the commentator.

Crowd favorite, Giant-Shimano team leader Kittel took the win with ease, though even with time bonuses on offer it wasn’t enough for him to take the leader’s jersey. This passed to the young Australian sprint ace Svein Tufts team mate Michael “Bling” Matthews. On the podium Bling as he is known was in his element, clearly loving every minute.

Next to me at the podium side was Dan Jones the OGE guy who brings you the unique Backstage pass videos, he said to me: “The guys are going to take the p**s out of Bling tonight for that performance on the podium, typical Bling”. 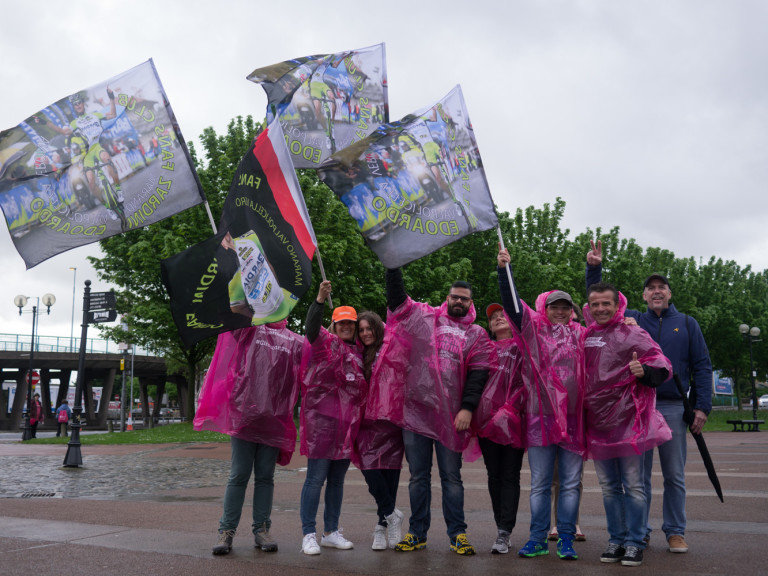 The third and final stage in Ireland started in Armagh, 70km south of Belfast. This was the stage that was to jump from Northern Ireland down to the Republic of Ireland. The crowds again were dense and excited. Getting through the crowds to chat with riders in the parking area was a chore.

With the rain rearing its head again most of the riders hid on the team buses till the last possible moment. I managed to get a few words with one of the Irish riders, Tinkoff-Saxo member Chris Juul Jensen. Though he has spent a large part of his life living in Denmark he also spent many years living in and around Dublin.

He had been amazed at how he’d gone from a domestic team mate on the continent to a well received and noted name in Ireland. Here in Ireland he was “The Man” or one of them, he was enjoying and taking it in while he could as once he’d returned to Italy he’d probably return to living and riding in the shadows of the team leaders. A shame as Chris is one of the coolest guys in the peloton that I’ve had the pleasure to meet.

The race kicked off in the rain. With a breakaway group that managed to stay away for most the day, crashes were a regular sight, with wet roads and a slow speed. Slow speeds can cause havoc, and it did.  Due to these slow speeds the peloton was compact for most of the day, the result is riders getting twitchy and moving around the peloton. With more street furniture around, it was a day where lots of bikes didn’t stay rubber side down.

The last 300m was spectacular. It had come down to a sprint but the thing that amazed everyone was how Kittel came from so far back to take the win. Coming in to the final corner at about 300m to go Kittel sat in 11th place, with no team mates looking out for him, he was alone. The sprint had opened up and he was nowhere to be seen, then from the left side Kittel opened up what was more of an attack than a sprint effort. He made everyone including second place finisher Ben Swift of Team Sky look as though they were standing still. 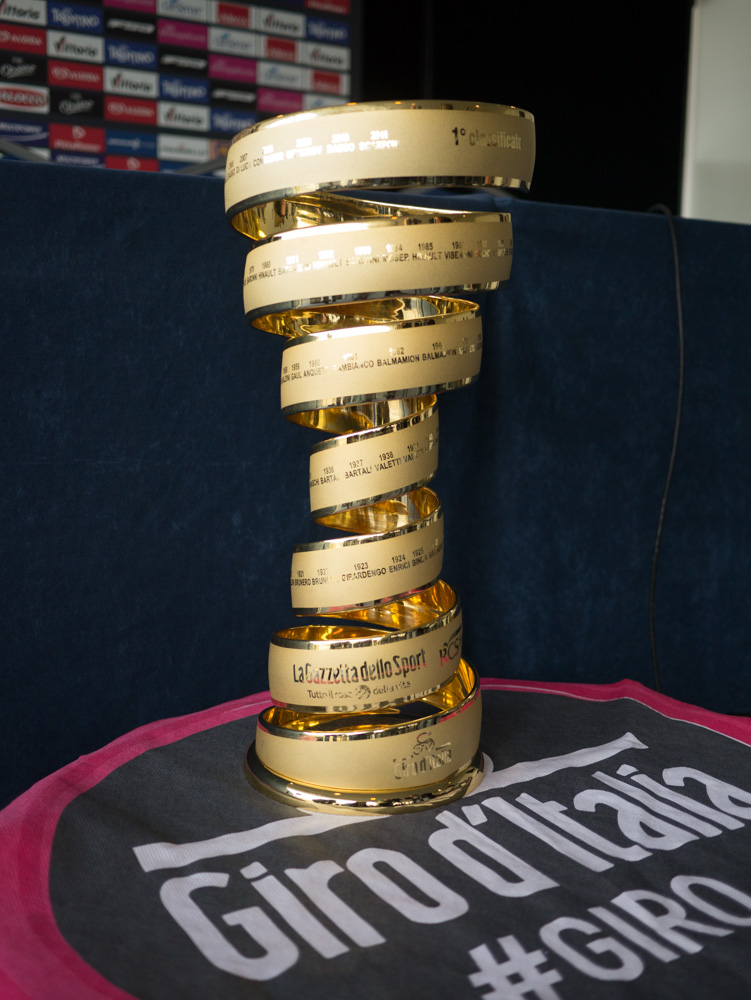 The talking point after the race was how some fan had captured Kittel’s collapse and recovery on the roadside in a ‘selfie’. Not cool according to many.

This photo along with Belgian photographer’s capture of the kid taking it, sparked an internet viral storm. Surprisingly one of Kittel’s team mates, Koen de Kort made a light hearted comment on Instagram “that it was both stupid and ridiculously cool of the kid”.

Mathews kept hold of the leaders jersey, holding on to it as the race now returns to Italy. As Ireland calms down it’s now Italy’s time to gear up for some Giro action!