We won’t spoil the entire story for you but unless you’re a diehard Lance follower then you will probably be blown away at the level of this cover up. Lance at one time was untouchable and if it wasn’t for his 2010 comeback then he may never have been caught.

This month Storyville and BBC4 treated us to an in depth look at one of the greatest and most controversial figures in cycling, Lance Armstrong. Whatever your feelings are on the matter there is one thing you cannot get away from: it is a fascinating story. 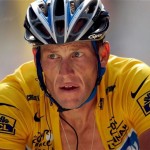 The timing of this programme is in a way quite strange as The Armstrong Lie has only just been released on DVD and was actually broadcast on a rival channel in the same week.

Having already watched that film – and coming in at the thick end of 3 hours viewing – we wondered what exactly would be in this feature that we haven’t already seen.

The main difference between this and The Armstrong Lie is that this is told from the point of view of the people involved and not just Lance. Sure, most of the same people are interviewed but that isn’t interrupted by Lance giving his own account on what was said.

The first thing that strikes you about this is “the lie” was a massive lie! This was off the scale. You’d be hard pressed to find a story more film worthy than the web of deceit contained in this whole affair.

The second thing that rapidly becomes evident in this piece is the completely different way in which Lance handled the whole situation.

On one hand he and his team created a system involving, bikes, planes, doctors, blood and all manner of subterfuge that helped him escape conviction for 18 years.  But on the other hand, those who were around him in the team all knew. He was almost sloppy at covering it up.

You would think with a plan (and sport) this big that you wouldn’t let your masseur overhear the finer details of your plan and not care. This was ultimately part of his downfall.

For cycling fans this film does contain some good archive race footage, indeed both films do.  So on one level anyone can enjoy these whether you like cycling or not as a good story is a good story no matter what but watching back those old races was entertaining too.

We won’t spoil the entire story for you but unless you’re a diehard Lance follower then you will probably be blown away at the level of this cover up. Lance at one time was untouchable and if it wasn’t for his 2010 comeback then he may never have been caught. He went one step too far.

Is Lance sorry? Well we’ll leave that for you to decide. We’re not sure but the good thing is that cycling can now perhaps start to look forward to a cleaner and fairer future. Watch both films. Tthey are different and equally fascinating. We think you need to see both to see the whole picture.

The Lance Armstrong Story – Stop at Nothing is still available on BBC iPlayer.

The Armstrong Lie is available on DVD everywhere.