Here’s our pick of what appear to be the most vomit-worthy race days this year. 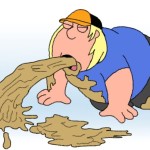 The distance doesn’t sound too bad at all – 138km. But the amount of climbing? Well, there’s quite a lot of it. 5,200m of it to be precise. Approximately 70 kilometres of this stage will be uphill, taking in six classified climbs. The shortest of stage means there’ll be no resting time either really. Just bonkers.

This brutal stage takes in the climbs of Passo del Tonale, Passo del Mortirolo and Madonna di Campiglio. The latter of which the riders will have done previously only a couple of days beforehand (albeit in the other direction). But it’s Mortirolo that will be the killer. Nearly 13km long – six of which have a constant average gradient of 12.2 per cent – and featuring an infamous 18 per cent gradient section at one point. Coughing up blood.

260km of filthy cobbled action. Okay, it’s not entirely on cobbles but there’s enough of them. If the weather is foul this race is horrendously arduous. And dangerous. This year it’s no secret that Sir Bradley Wiggins wants to win it. This means it will see some hard racing; Wiggo will have to ride out of his skin to win this race and his rivals will have to on the top of their game to stop him. Brad has a habit of achieving his goals.

This 236km long stage looks pretty calm for a long time. And then you get to the final third and there’s three massive mountains. The last of which finishes above 200om! The final climb up to Cervinia is almost 20km long and features loads of 10+ per cent gradients.

I’m partly mentioning this stage because it will mark the 40 year anniversary of Bernard Thévenet’s besting of Eddie Merckx. It will also be my son’s 3rd birthday (ahhh). This stage has more than its fair share of climbing but arguably the more interesting difficulties will be on the tricky descents.

It’s only 47km long. But it’s a uniquely awful bicycle race. It’s not a road race. It’s not really a cyclocross race in the usual sense. It’s more like an endurance fell run up a series of three mountains that you have to have a bike with you. Bonus suffering points if the Yorkshire weather does its usual thang.

Also known as the Tour Of The California Alps. It’s not so much a race as an epic survival sportive! 207km in length with over 4500m of climbing. Featuring five mountain passes each higher than 2500m altitude.

A 103 mile American ‘road’ race. According to the organisers: “You will encounter chip and seal, sandy gravel, smooth as glass asphalt, and some roads that are just plain bad. This race is a classic test of man and his machine vs. the terrain and elements. It would be unfair to attempt to predict what type of weather to expect for the Rouge Roubaix. You should come prepared to battle 80 degree heat and Louisiana humidity (it’s worse than Houston). You should also come prepared to expect temperatures so low that your water bottles will freeze.”

The Plateau de Beille is a near-16km climb with about 1800m of ascent. Ouch. Just ouch.

It’s quite a lengthy stage (221km) but this stage is all about the pavé. More than 13km of cobbles split into seven sections. There will be carnage. Remember last year’s cobbles?