The crowds! Where is the road?

When it was announced that Yorkshire was to host the 2014 Grand Depart, few would have anticipated the response from the public for the event.

The build up was impressive and with a few weeks to go really went through the roof as villages, towns and anywhere remotely near the route embraced it wholeheartedly. Roads were resurfaced, houses and livestock were painted, banners made, festivals planned and the result was spectacular.

Right from the off in Leeds city centre the crowds were huge and proceeded to practically line the entire stage. The pictures of the peloton on Buttertubs Pass were you can’t distinguish where the road is and the crowds take over will become synonymous with the start.

The only downer on an otherwise incredible day was Mark Cavendish crashing out 200m from the line but even that couldn’t dampen spirits on such a memorable day.

This is what a national champion’s jersey should look like 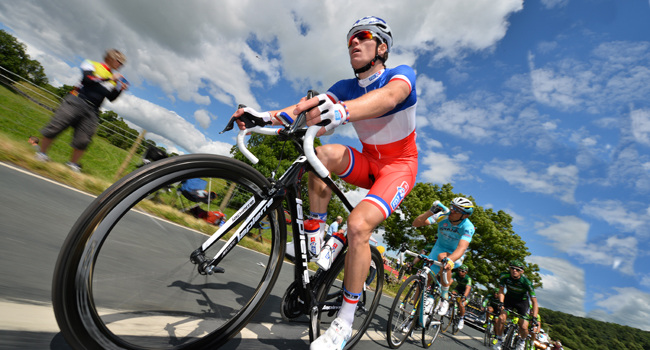 Frenchman Arnaud Demare (FDJ.fr) shows what a national champion’s jersey should look like.

Stage 2 promised much and delivered in spades as all the overall contenders were forced to show their hands very early in the race. With 9 categorised climbs this was no easy day and the results prove it.

When Vincenzo Nibali (Astana) crossed the line alone after jumping away from the favourites, the day had a worthy winner. What you may not have noticed too much though is that he is the Italian national road race champion.

It seems the current trend is to hide the coveted stripes of national champion in the current trade team jersey is such a shame, see also Slovak Peter Sagan (Cannondale) and Spaniard Ion Izaguirre (Movistar).

The only person to really shout about his win is the French champion Arnaud Demare (FDJ.fr) and we love him for it. 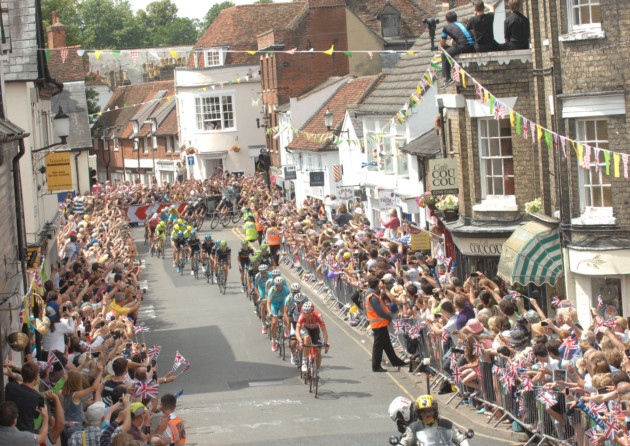 The crowds turn out in Saffron Walden.

With Yorkshire pulling off what is described as the best Grand Depart ever, there was intrepidation as the race moved south that the region may not embrace the race as much as their northern counterparts.

No should have worried as the crowds were every bit as large as Yorkshire and even the rain near the finish didn’t deter many thousands of fans from turning out to see their heroes in action.

Oh and how strong was stage winner Marcel Kittel (Giant-Shimano) in that straight line finish gallop?

Where were the crowds? 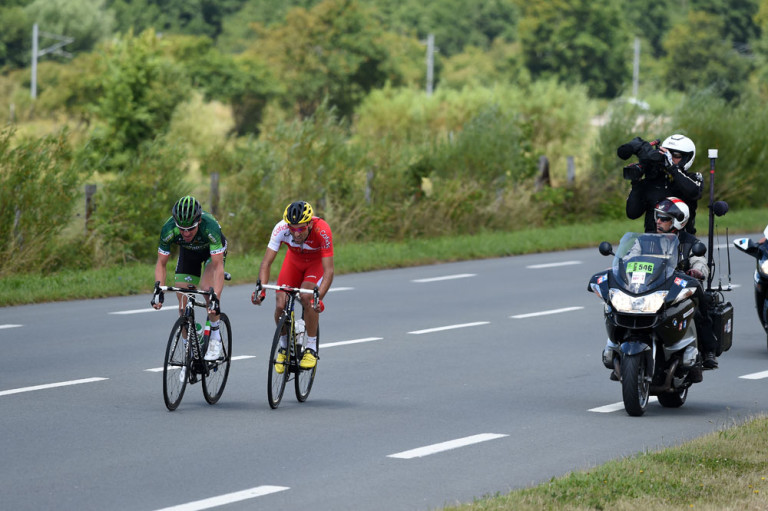 Wouldn’t have been this lonely in England!

With the race back on home soil the riders may have been relieved to finally have a clear roads and well behaved fans not crowding them out but it didn’t look as good as the English stages.

Many villages were only busy in the centre and large swathes of the route had no one watching. The wet weather didn’t help brighten things up either and with a pretty much guaranteed sprint on the cards it all seemed like a damp squib compared to the UK stages.

Kittel was also run close in the sprint, this time only winning by less than a bike length but still a win.

How much happened today, could you keep up with it all? 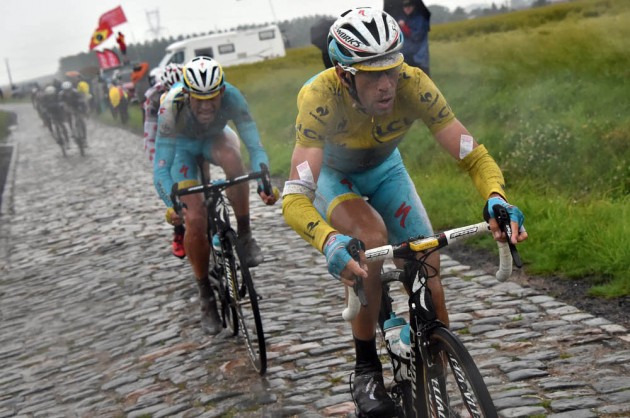 This stage was billed as one to watch and it didn’t disappoint. The 9 cobbled sections had everyone bar the few Classics specialists panicking well beforehand.

As it turns out, most of the action happened before the riders hit the pave. The biggest news was of course Chris Froome (SKY) abandon the race after crashing for the third time in two days but there was a lot more also going on.

Many riders crashed on the wet slippery roads before the cobbles and once on them the race was blown apart.

The biggest winner of the day was the yellow jersey Vincenzo Nibali who not only defended his lead but actually put time into every other overall contender leaving most around two minutes behind as he drove to the line for third place on one of the toughest Tour stages in a long time. 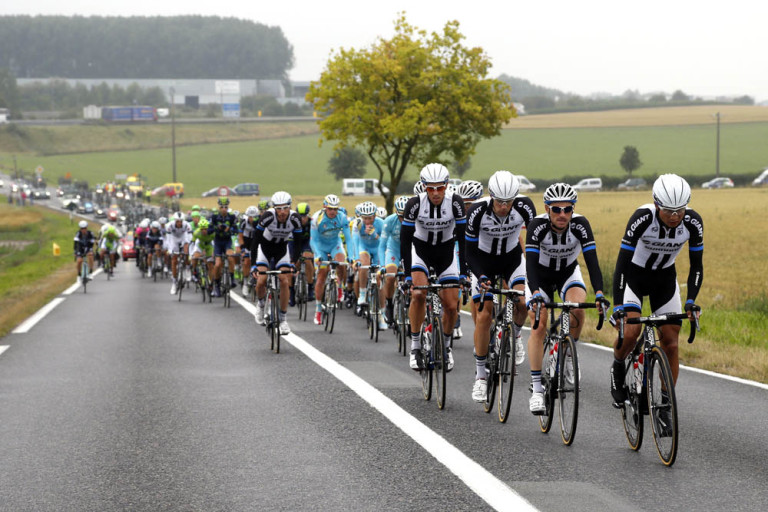 Today was meant to be a much less stressful day than the preceding day’s cobbles. The wind made it a different prospect. All the teams knew that there would be strong cross winds today and those that know how to ride in these conditions did some real damage.

Riding hard on the front at crucial points can cause the group to split and if you’re caught on the wrong side it’s a long hard slog to get back up to the group in front. The northern European teams are considered masters of this art and so it proved today as Omega Pharma-Quickstep and Lotto-Belisol drove the front group to split the field.

The main victim of said riding tactics was the German sprinter Marcel Kittel. He missed the main move and his team had to do a tough chase to get him back in contention. Only thing was when he did get back he was too tired to take part and dropped off the first group in the closing kilometres. This left the door open for the other German powerhouse Andre Greipel (Lotto-Belisonl) to claim his first stage in this year’s tour. 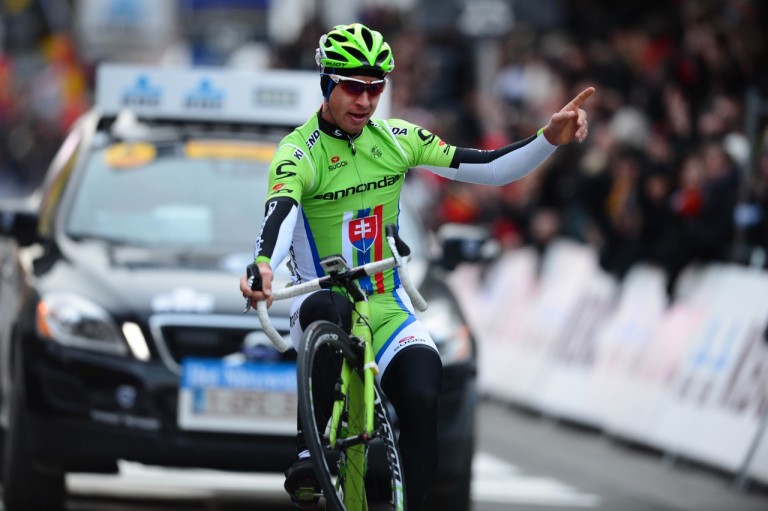 We want to see more of these winning antics please.

What has this man got to do to win a stage? He hasn’t finished outside the top five in any stage so far this Tour. Today he came closest but was denied by the width of a tyre despite a track style lunge at the line by Matteo Trentin (Omega Pharma-Quickstep).

It’s not just for Peter’s sake we’d like to see him cross the line first; we want to see what victory salute he comes out with.

Mind you, on current form we think he’ll just be so glad to win that he won’t be too bothered about whatever display he has currently been saving for us.