The armchair critics loved this stage 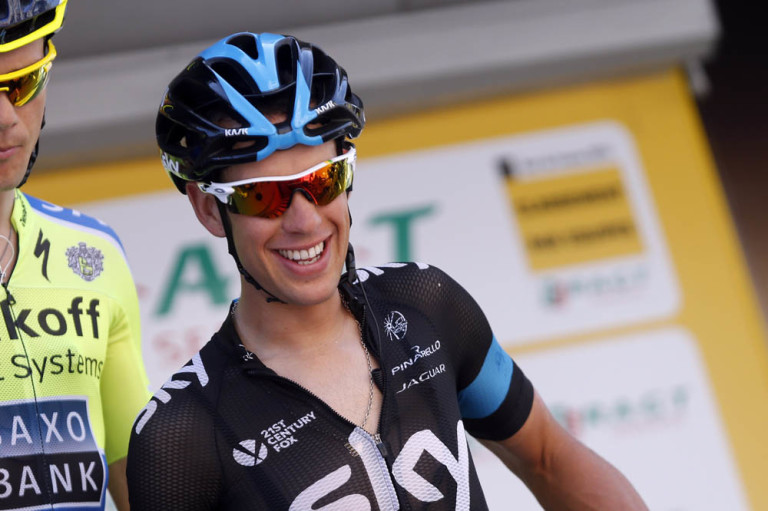 Richie Porte smiling at the start but unfortunately not at the finish.

When Richie Porte (Sky) went pop today we could just hear all the armchair critics shouting that Sky should have brought Sir Bradley Wiggins to the Tour as a backup.

Twitter and Facebook went into overdrive as loads of people vented their “told you so” at the team principal Sir Dave Brailsford.

Porte was Sky’s Plan B following the withdrawal of pre-race favourite Chris Froome so now they’ll have to go to Plan C which is try and get a stage win and if someone, Porte or Geraint Thomas slip into the top ten overall that would be a bonus but nowhere near pacify the Wiggo fans.

Sometimes the leader dropping out makes things better for other team riders. 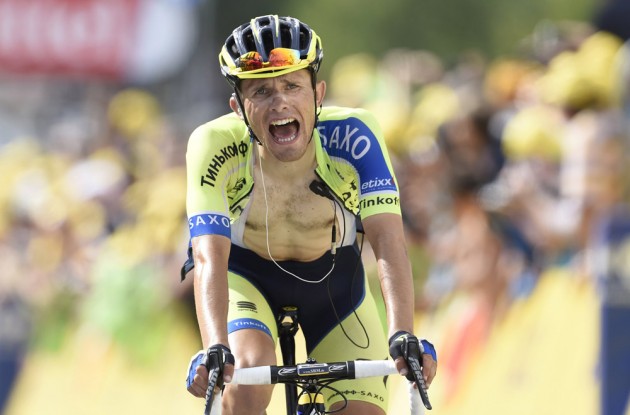 Rafal Majka takes uses his strength for his own win.

When the team leader withdraws from a race, it sometimes seems a team doesn’t know quite what to do if they don’t have a strong back-up rider.

This scenario has befallen Sky with Chris Froome and Tinkoff-Saxo with Alberto Contador. While Sky initially appeared to be going with Richie Porte and a high GC placing, yesterday’s stage unfortunately saw an end to that plan when Porte lost a lot of time, other teams usually switch to stage wins.

Riders who would otherwise be sacrificed to ensure the leader stays protected are given their chance to shine. Young Pole Rafal Majka (Tinkoff-Saxo) got his chance to shine today and boy did he grab it.

He jumped away from his breakaway rivals and despite only having a 40 second gap going into the last climb he managed to hold off everyone including a determined Vincenzo Nibali (Astana) for a very well deserved victory which no doubt helped to lift team spirits after the loss of their leader. 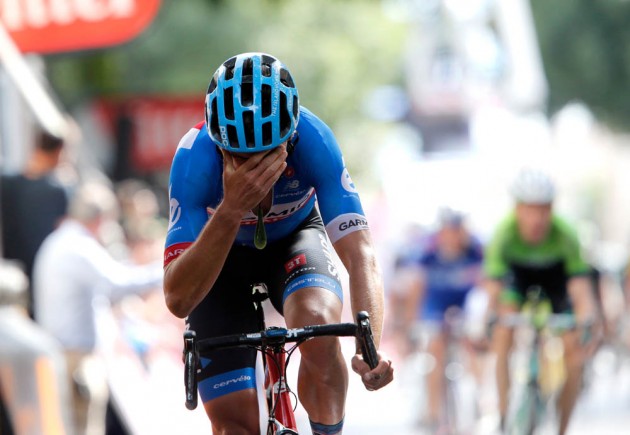 Jack Bauer crosses the line in 10th place after being caught 10 metres from the line.

Talk about keeping us on the edge of our seats right to the line!

When Jack Bauer (Garmin-Sharp) and Martin Elmiger (IAM Cycling) went away early in the stage few thought they would stay out as long as they did so they were allowed to open a decent gap. But the wind turned mid stage and gave them an advantage.

Coming into the closing kms they were still away and not even a charging Tony Martin (Omega Pharma-Quickstep) could reel them in. As the line inched closer it looked like Bauer night just hold of a rampaging group but with less than 10 metres to go he was caught and passed eventually finishing in 10th place on the stage.

He may not have won the stage but will go down as one of the heroes of this Tour and will probably gain him more notoriety and fans than if he had won, although I’m sure he would rather have won all the same. 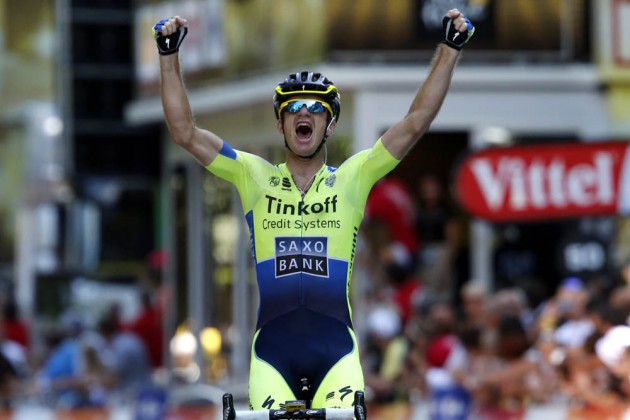 Rogers enjoyed the final run in the most.

This was one of the few mountain stages not to have a summit finish with the last 19km all downhill apart from a technical 2km flat section in the town to the line. From the summit of the last climb it was flat out to the finish and it looked like a good course to ride.

The descent looked fast but not dangerous with enough wide corners to keep you thinking while the last 2kms in the town included several switchbacks and a series of turns which could be taken fast.

Australian Michael Rogers (Tinkoff-Saxo) enjoyed it the most by staying away from his day long breakaway companions to win his first ever Tour de France stage in his tenth Tour participation.

How many sub plots did today’s stage have?

There were so many sub plots going on today as riders fought not only to gain or safeguard position or limit losses on GC but many other competitions.

The King of the Mountain’s jersey saw a battle between Joaquim Rodríguez (Katusha) and Rafal Majka (Tinkoff-Saxo) with various team mates of each doing sterling work to bring back breaks or nullify threats. Alejandro Valverde (Movistar) looked to be in danger of losing his second position overall until he got over his bad patch near the end.

The White Jersey of best young rider was the most frantic fight of the day as both young French hopes Thibaut Pinot (FDJ.fr) and Romain Bardet (Ag2r) attacked each other, while Bardet’s team mate Jean-Christophe Peraud gained time to try and move closer to the overall podium.

Race leader Vincenzo Nibali (Astana) never really looked in trouble and had a few attacks to stamp his authority on the race and put even more time into his rivals. Then there was the battle for the stage which was won by Rafal Majka by a clear 29 seconds while the favourites came in after in dribs and drabs to keep us clock watching.

We were tired just watching and trying to keep up with what was happening!