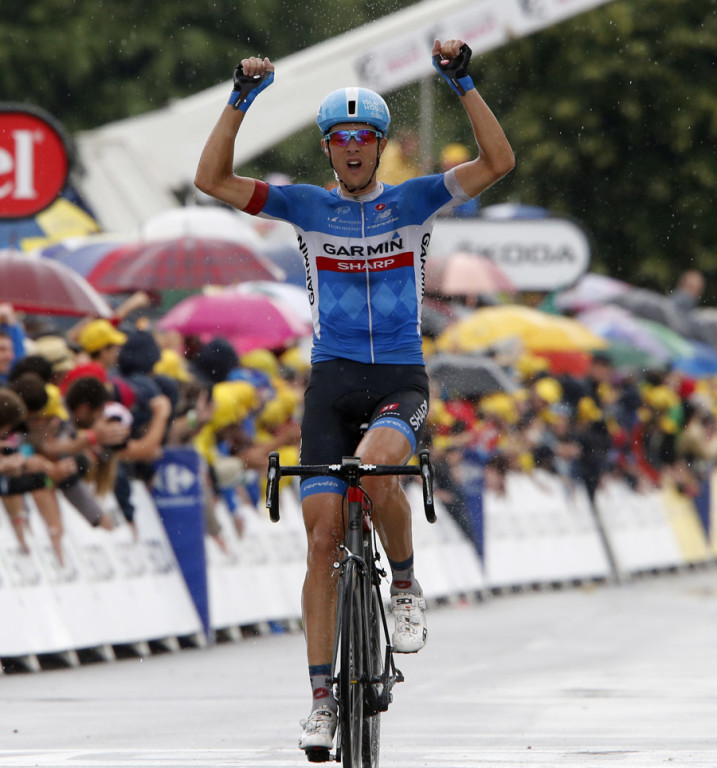 Garmin-Sharp executed a perfect 1-2 attack today and it was great to see it pay off. Tom-Jelte Slagter was away for most of the day and when it looked like he would soon be caught by the bunch on the last climb the person attacking out of the peloton towards him was his own team mate Ramunas Narvardauskas.

He caught and overhauled Slagter and put his head down. What the bunch may not have known is he is a very handy time triallist so knows how to ride hard on his own.

Despite the bunch’s best efforts he managed to hold them off and with a few hundred metres to the line he knew the stage was his and even had time to celebrate the win. Great to see such a move pay off for especially since Garmin-Sharp rider Jack Bauer got caught so close to the line a few days previously.

The harshest reason for a time penalty in tour history?

The Tour passed through the village of Saint-Marie-de-Campan today which is the scene of what must rank as the Tour’s harshest reason for a time penalty.

Back in the early days of the Tour, riders were not allowed any outside assistance and had to do all their bike repairs themselves no matter how severe it was.

In 1913 Frenchman Eugène Christophe broke his forks not far from the village and walked with his bike on his shoulder for nearly two hours to the village’s blacksmith shop where he set about repairing his forks taking another three hours.

Despite doing all this, the organisers penalised him 10 minutes (later reduced to three) for allowing a young boy to operate the bellows while he worked on the forks. He still finished seventh overall that year, but the story has gained him Tour immortality as the harshest reason for a time penalty. 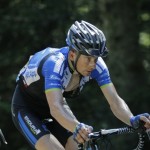 You’ll be seeing a lot more of this guy in future.

Team NetApp-Endura was one of the wild card invitations to this year’s Tour and they really made the most of this opportunity. They always seemed to have a rider in the break and even sending riders up to the front towards finishes.

The team leader didn’t disappoint either. Czech rider Leopold König rode an excellent race putting himself into the top ten against the biggest teams in the world.

He finished fifth in today’s individual time trial to secure seventh place overall, we think this is a guy we will be seeing a lot more of in the future.

When Jean-Christophe Peraud (Ag2r) went down on a slippery white line as the race started its final laps, he was soon 30seconds down on the peloton and in danger of losing his second place overall.

The bunch was really starting to wind it up so speed was high but it was great to see the yellow jersey Vincenzo Nibali (Astana) jersey riding to the front to slow the pace down to allow Peraud and his team mates to get back on.

It initially looked like Sylvain Chavanel (IAM Cycling) was taking advantage riding off the front at this stage but he too was merely making himself visible telling the others who didn’t see Nibali to slow down.

When Peraud and his team mates were safely back in the bunch frantic racing resumed but was great to see such sportsmanship on the world’s biggest stage.

Remember this year’s excellent Tour De France with an official souvenir or T-shirt.