And so, the greatest of the Grand Tours comes to a close once more. 2013 is certainly going to be a year to live long in the memory. The first Post-Oprah Tour, the defending champion forced out by injury, a good five favourites all capable of winning the Maillot Jaune. There was certainly a lot going on!

Let’s get on with things eh? 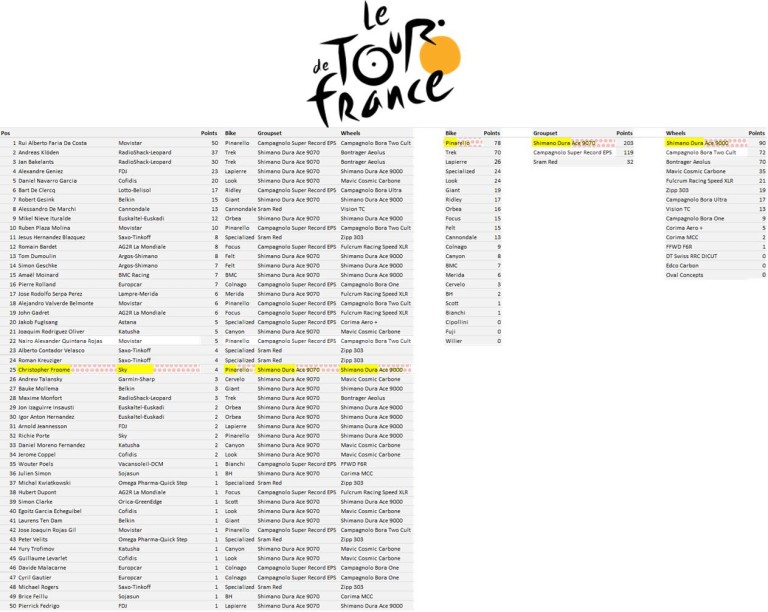 Rui Costa (No, still not that one) takes his second stage win, in the pelting down rain at Le Grand Bournand. A very impressive mountain stage display from the Movistar man, taking the win by a clear 48 seconds. Monsieur Froome and the other GC contenders finished 8:40 adrfit, but all together,

Jerseys after stage 19 were: 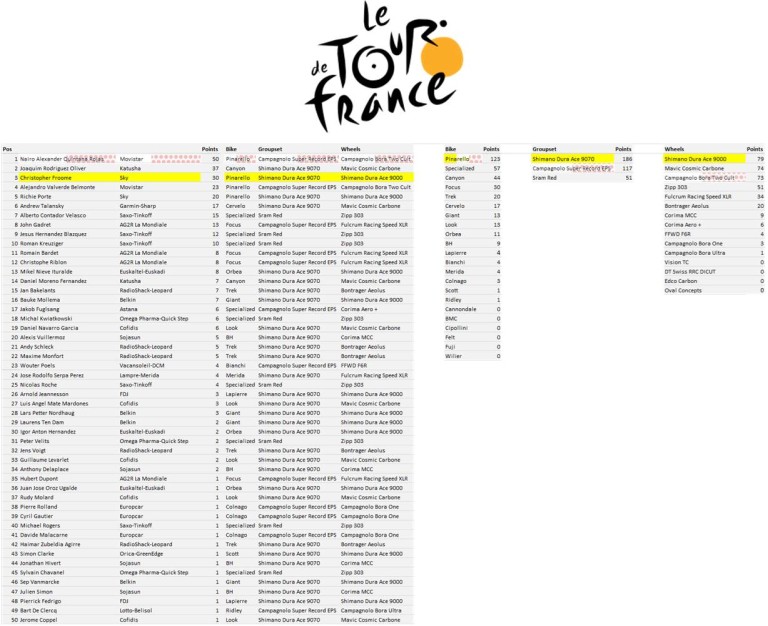 The real business end here… If Froome could avoid disaster, the Maillot Jaune was his. It was a mountainous stage, no mistake, but Froome had already displayed his pedigree and although his nearest rival, Quintana, took the stage win Froome finished third and so took a comfortable 5:03 lead into the final run in to Paris.

A heroic push for a break ended up with Chris being reined back in by Quintana and Joaqium Rodriguez. Quintana’s efforts here (to take his first stage win too) meant he secured the Polka Dots in addition to his White Jersey.

So that’s Froome, Pinarello and Shimano (Dura Ace 9070 and 9000) in Yellow. Quintana, Pinarello and Campagnolo Super Record and Bora Two in White and Polka Dots, and Sagan in Green, with Cannondale, SRAM Red and Vision TC. 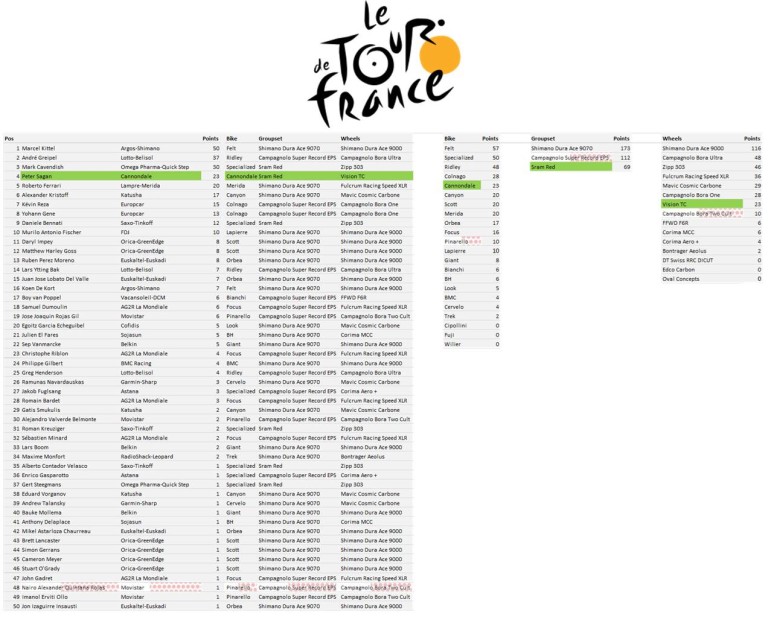 Marcel Kittel takes his 4th stage victory of the Tour this year, denying Mark Cavendish a 5th consecutive victory on the Champs. Congratulation Marcel, the lead out was near perfect but you still had to win it!

After 3,403km of riding, some sublime performances in both the mountains and in the time trials, one crash (in the warm up to stage one) and a lot of questions and test for doping (ridiculous), Chris Froome is crowned Tour de France Champion.

A dominant performance throughout has shown that Froome really is a force to be reckoned with, and will remain so for a good few years being only 28.

Hearty congratulations to Chris, who was quick to acknowledge the important input of his team mates in his victory, but who also had to win this by himself. There were several stages where Chris really did have to go it alone, and go it alone he did – through determination, talent  and hard work he has secured the Tour title, and who would bet on it being his last?

Back to the Manufacturers League, we have Mr Peter Sagan making a first appearance in the top 50 for a good few stages, but he finishes the Tour the proud wearer of the Green Jersey for the second year running. Personally, I thought the beard and hair were a nice touch too 🙂

Mr Nairo Alexander Quintana Rojas takes the White Jersey and also the Polka Dots Jersey. A hugely impressive Tour from Quintana, no doubt he will be challenging Froome for future GC titles in all the Grand Tours.

Finally, Mr Christopher Froome takes home the Yellow Jersey. Continuing the dominance we have seen by British Cycling over the past few years but also this victory will no doubt do wonders for cycling in Africa. Froome to MTN Qhubeka? 🙂 (No show in the final league table installment by Chris, he took it easy and crossed the line in 128th place – can’t blame him!) 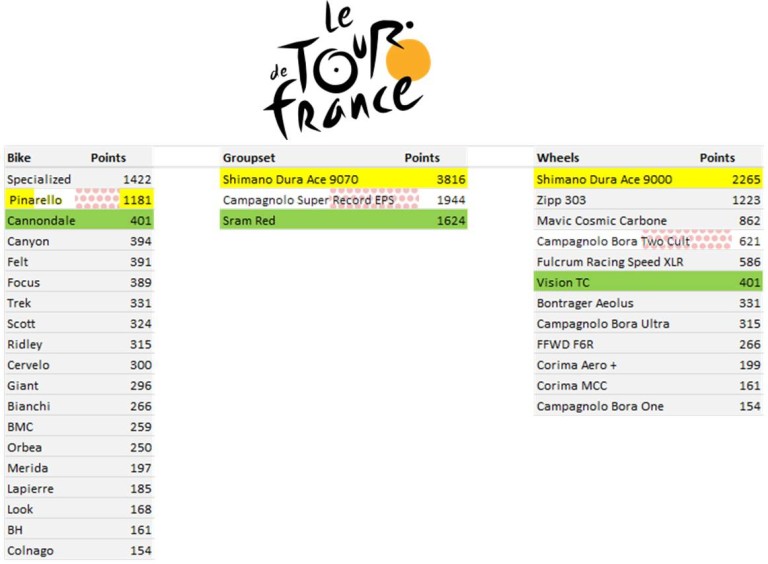 Which means we have the following podiums!

Specalized win their second Grand Tour of the season, Pinarello finishing second again, but a new entry for Cannnondale,

A comfortable victory for Shimano, with Campagnolo coming second and SRAM not far behind them.

Shimano take another comfortable win in the Wheels category. Zipp take second place and Mavic third – changes from Fulcrum and Campagnolo respectively in the Giro d’Italia.

But what about the Jerseys?

Ok, ok! Here are the final Jersey Results for the Manufacturers.

So it looks like Pinarello did pretty well overall, seeing as they beaten into second place in the ML listings. A Strong showing from Campagnolo too, in a competition all but dominated by Shimano otherwise.

Well, that’s it folks. It’s been fun, and I’ve actually enjoyed following the Tour this year more than I ever have. I hope you have enjoyed the Tour de France Manufacturers League 🙂

Panic not though! The Manufacturers League will be back for the Vuelta a España, starting on the 24th of August.