Another 6 stages have flown by, here are the updates! 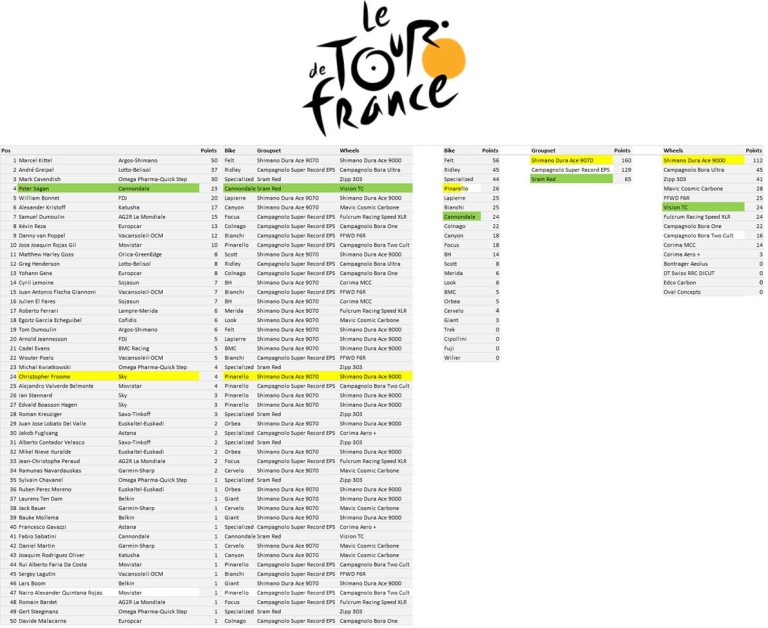 Marcel Kittel won his second stage of this years Tour, pipping Greipel, Cavendish and Sagan in a bunch sprint after 197km of hard racing. Closing a bit of the huge gap Mr. Sagan has built up in the race for Green. 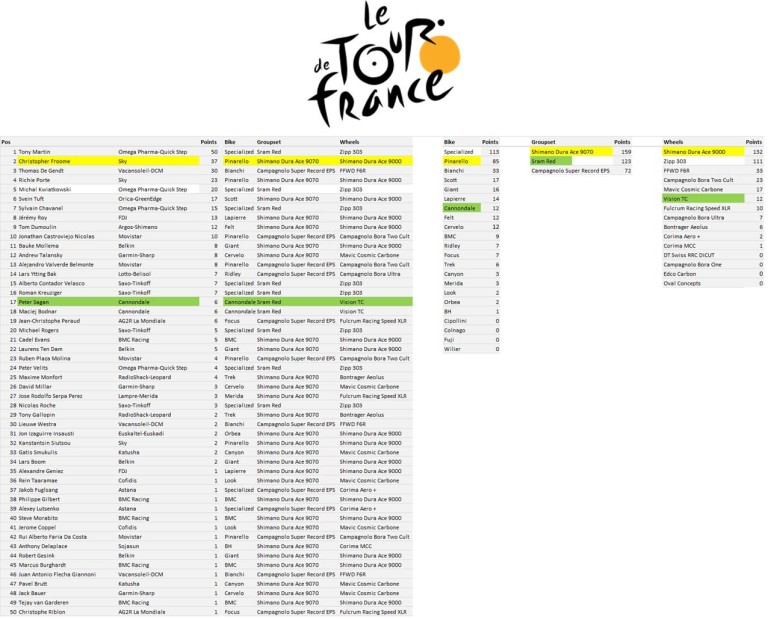 Time Trial World Champion Tony Martin showed he had recovered from his injuries (suffered earlier in the Tour) to take the stage win in the ITT. A stunning ride from Chris Froome extended his GC lead to 3:25 over Alejandro Valverde.

All Jersey wearers remain the same as yesterday – Froome, Sagan, Kwiatkowski and Rolland. 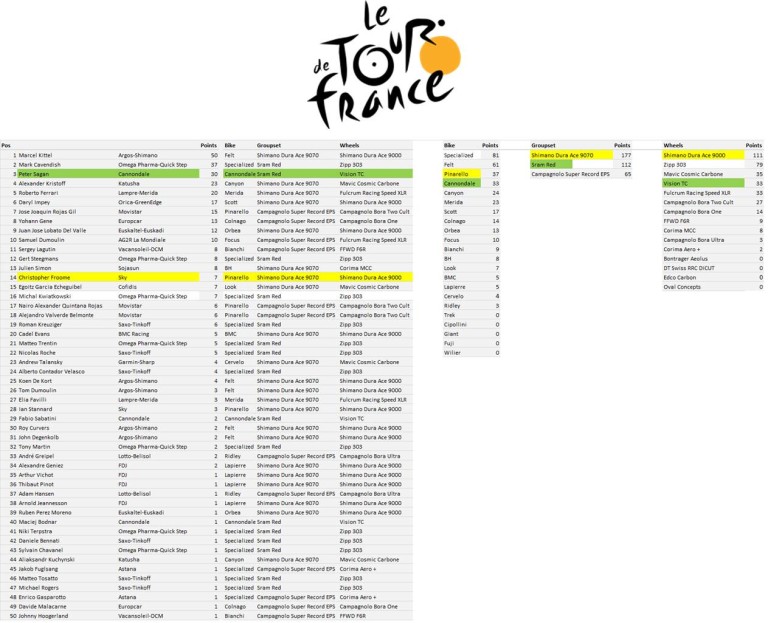 Marcel Kittel takes his third stage win here at stage 12. A dream Tour for the German rider! Cavendish beats Sagan into third, closing the gap for Green but not by much, Peter Sagan still has a commanding 94 gap at this point.

Jersey-wise, it’s as you were for all of the leading 4.

Meanwhile Froome loses over a minute of his lead to chasing GC rivals, Contador and Mollema – bad times! Stage 13, unlucky for some? 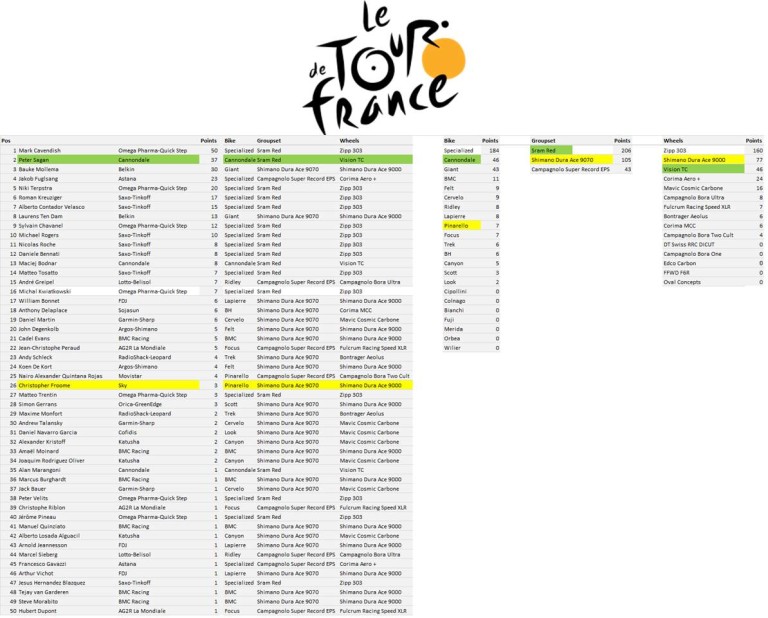 Despite the huge amount of time lost to his rivals, Froome retains the Maillot Jaune. The indefatigable Peter Sagan retains Green thanks to his 2nd place finish. Pierre Roland and Michal Kwiatkowski retain the Polka Dots and White Jerserys respectively… Getting a bit predictable this now eh?

Matteo Trentin won his first Tour de France stage (in his debut Tour), and ended the 3 year wait for an Italian winner.

There was a big slit to the peloton, 07:17, but the main runners and riders were all together here. Andrew Talansky being the only big mover – 17th to 12th thanks to finishing with the leading pack. He is in sight of the White jersey now also. 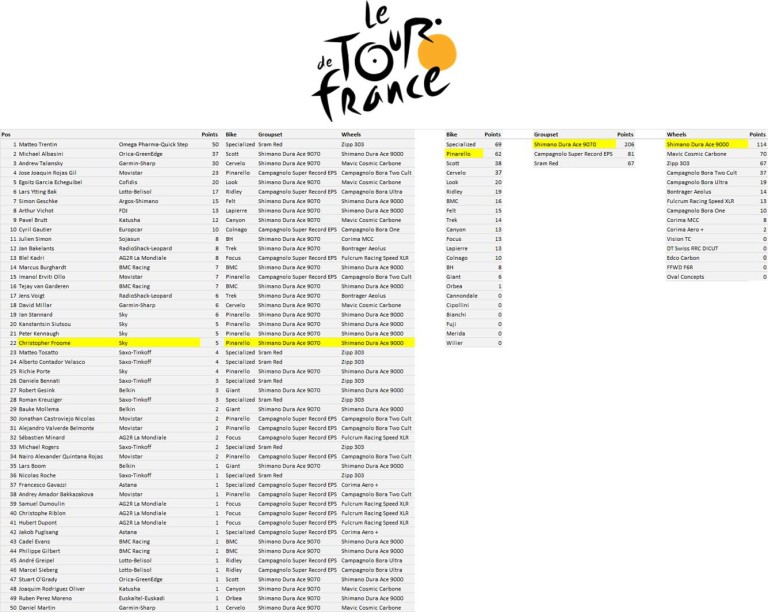 The jerseys are as follows:

In an utterly awesome display, Chris Froome proved without doubt his pedigree and stamped his claim on the Maillot Jaune. Being on a Sunday, this was one of the only stages I’ve been able to watch live (for instance I definitely haven’t watched any on my computer at work..) and it was truly remarkable. So much so that I have remarked on it several times since.

Blowing away Contador, who was so unable to react to the break it looked like he was going backwards. Catching Quintana, toying with him before obliterating any chance of a stage win for the youngster. Froome was epic today. I don’t like the misuse of that word, but it is apt for this display. Bring on the Alpe d’Huez! (twice) 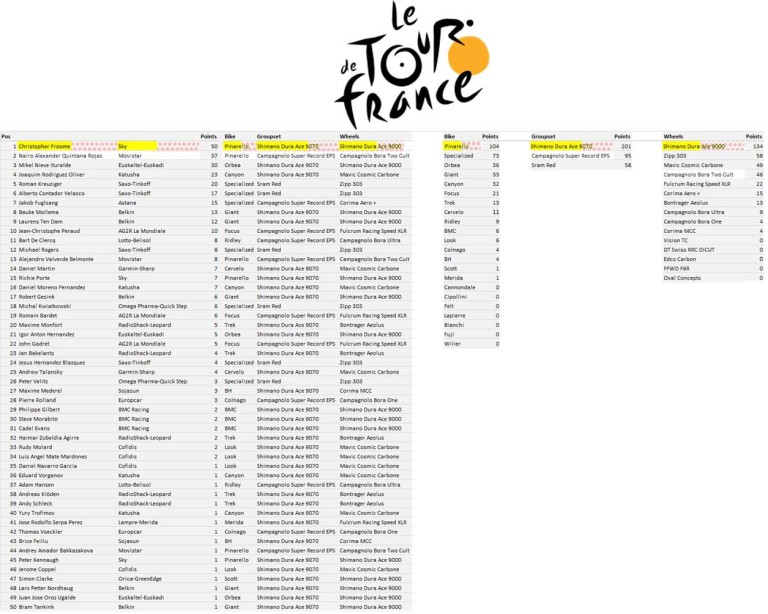 Now with a colossal lead of 04:14 over Mollema and 04:25 over Contador, you really have to fancy Froome’s chances.

As a result of his mountain heroics, Froome also takes the Polka Dots jersey! Peter Sagan retains the Green and Quintana firmly takes a grip of the White jersey.

I’ll be back in a few more days with an update before the final stages of what is proving to be a very entertaining Tour.

As for the reaction of certain parts of the media and several thousand keyboard warriors to Chris Froome’s glorious Ventoux victory – well, those grapes must be pretty sour. (can’t believe I was so restrained here – Felt like saying they could eat a bag of proverbials! Ooops… so close).

See you on Friday!