How good are the Yates twins going to be? 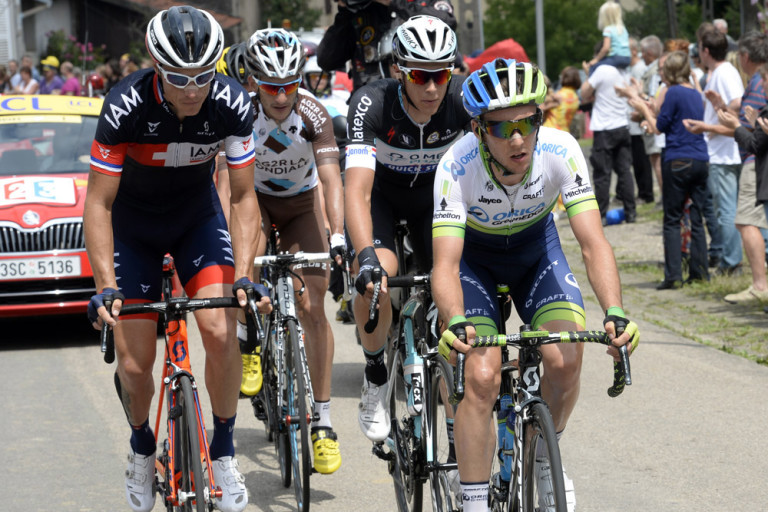 British fans finally had something to cheer about today when Simon Yates (Orica-GreenEdge) got away in the day’s break and looked strong. Unfortunately he was up against some very experienced riders also in the break and when eventual stage winner Blel Kadri (Ag2r-La Mondiale)jumped away he couldn’t hold his wheel; mind you neither could anyone else.

When Kadri was interviewed after the stage he said the rider he feared most today was Simon Yates over seasoned strongmen Niki Terpstra (Omega Pharma-Quickstep) and Sylvain Chavanel (IAM Cycling).

We have to remember Yates is only 21 years old and in his first season in the top professional ranks. What a future him and his twin brother Simon have! 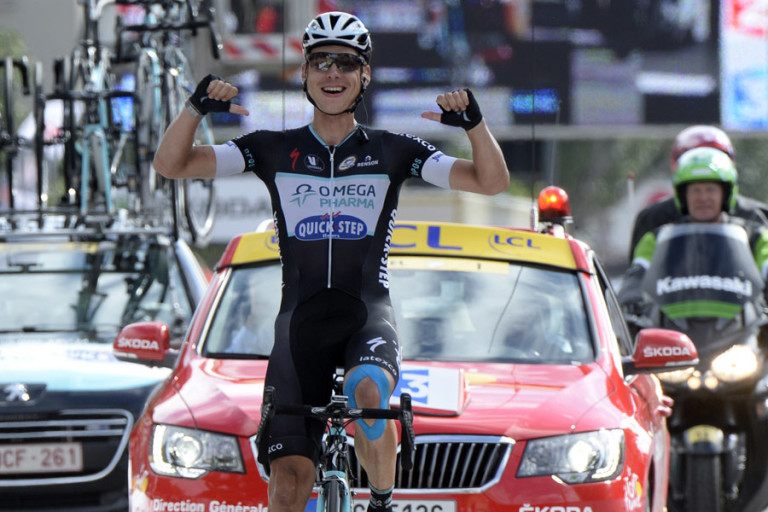 Tony Martin finally getting his arms in the air for a Tour stage win.

Tony Martin finally got to raise his arms in a victory salute for a Tour de France stage win today. He broke away early on in the stage and shed his breakaway companion with 60km to go to solo to an impressive stage win.

It was in effect for him a time trial on a road stage and that makes it all the more impressive. In his interview after he was his usual understated self and said he had no problem putting out between 400-500 watts in the last few kms as his legs felt so good.

The Tour can help you overcome pain. 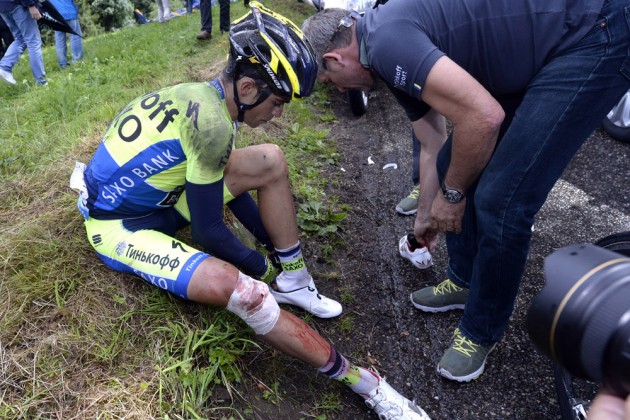 Contador continued for 20kms and caught several groups before the pain became too much.

This was yet another memorable stage with several displays of pure determination to continue in the race despite crashes. Most notable was Alberto Contador (Tinkoff-Saxo) crashing heavily on a fast descent but remounting and carrying on for another 20kms before finally abandoning despite with what was later discovered to be a fractured tibia.

NetApp-Endura rider Tiago Machado also had a bad crash and after being put in an ambulance and declared abandoned, he emerged heavily bandaged and rode to the finish on his own 43 minutes down but importantly still in the race. Talk about hard men!

Suspense from first to last rider. 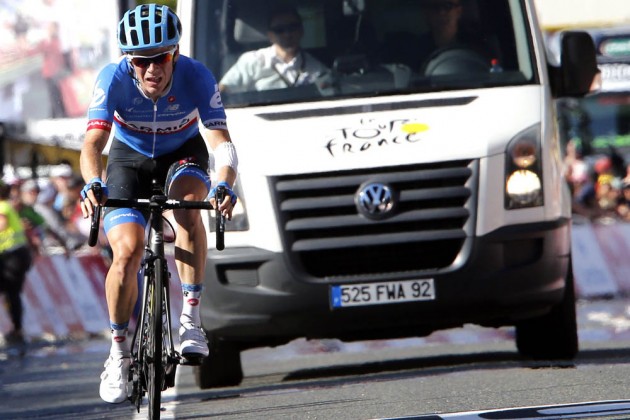 Today’s stage had suspense from the first rider to cross the line to the very last. Tony Gallopin (Lotto-Belisol) may have lost his yellow jersey on Monday but showed he still has plenty to give by breaking away on his own from the leading group with several kms to go.

He never had that much of a lead and it was touch and go whether he would be caught or not but held it right the way to end and won by a matter of metres as the bunch failed to reel him in.

At the other end of the race, the American Andrew Talansky (Garmin-Sharp) won himself a legion of fans for just finishing the stage. He’s had several bad crashes in this year’s race and has been visibly suffering each day.

Today’s stage seemed like the final straw and he dropped back and stopped by his team car for many minutes. After discussing with his manager he got back on his bike and rode on last man on the road just in front of the broom wagon.

Everyone thought this was it for him as he lost more and more time and was in danger of not making the time cut. With all eyes on the clock, he crossed the line 32minutes down on the winner after riding most of the stage on his own and clearly in pain but to tremendous applause and admiration from the public, race officials and riders, not to mention a new legion of worldwide TV followers!

Greipel, happy to rant in English or German.

The German sprinter Andre Greipel (Lotto-Belisol) became the latest high profile rider to suffer a crash today coming down just outside the 3km to go mark on today’s stage. What looked to be an excellent opportunity for him to grab another stage (Marcel Kittel and Mark Renshaw the other sprint favourites had already been dropped) turned sour as he hit the deck.

Thankfully he was soon up and back on his bike looking ok and riding in with fellow crash victim Sylvain Chavanel (IAM Cycling). What we didn’t expect was to hear him talking to the Frenchman in English, well not talking but blaming him for the crash.

Chavanel could also be heard replying in English that it wasn’t his fault. Used to be this would all be done in French or each rider’s native language whether the other understood it or not, times are a changing.