The 2014 Friends Life Tour of Britain kicks off on Sunday 7th September in Liverpool city centre and over the next eight days takes in some of the most iconic landscapes in the UK. Apart from the first and last stages and the short time trial, every stage is practically up and down all day.

The Queen Stage looks to be stage 3 with a summit finish on category 1 ascent of The Tumble while stage 7 has two category 1 climbs in succession not far from the finish in Brighton promising some very exciting racing.

The time trial is very short this year, 9kms, so strong TT riders can’t rely on it to gain time. The final laps round the capital will once again bring the crowds out and the pace will be super fast as teams try to get some TV exposure as well as a win. 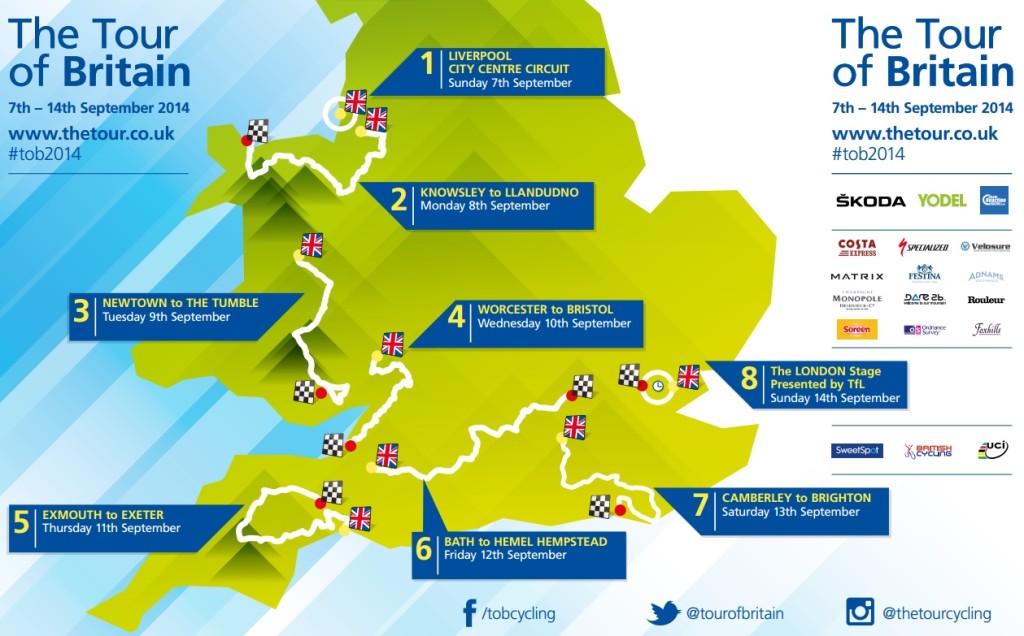 Stage one is a flat not too technical circuit race around Liverpool city centre which looks tailor made for Mark Cavendish (Omega Pharma-Quickstep) although expect to see the smaller home teams up there as city centre racing is their bread and butter during the season.

Although the route map shows only three category 2 climbs on this stage it is still going be a tough 200km. The last climb of the day is the Great Orme which comes very close to the finish and should provide a good spring board for someone to jump away or at least the strong men to come to the fore early in the race.

This promises to be the Queen Stage as its up and down again all day and summit finish on the fearsone category 1 climb of The Tumble. Anyone with overall ambitions will be using this stage to gain time on non climbers so expect to see action all day as riders prepare for the finish whether they are climbers or not.

A slightly easier day than yesterday with a few climbs and a drag to the finish in Bristol which will suit the punchier riders.

Today looks to be a day for the climbers again with a category 1 climb mid stage and a category 2 not far from the finish in Exeter. The downhill run to the finish might thwart the climbers though as there may just about be enough distance to get back on if you’re not too far back over the climb.

With a climb not far from the start and a final third that’s consistently up and down, today’s stage will sort out the tired from the strong although again a downhill run in to the finish offers the chance for dropped riders to come back.

This is the final chance for the climbers to make their mark on the overall. It’s up and down all day again but there are two category 1 climbs in succession not far from the finish and although there’s a downhill run to the finish, the two climbs so close together will do some serious damage. Anyone defending the jersey at this point will really be under pressure if they or their team is weak so promises another great finale.

The only time trial in this year’s race is quite short and doesn’t offer the strong TT riders the opportunity to gain time on rivals. Sir Bradley Wiggins (Sky) won the TT last year and is odds on to take this one in his home city but not with as big a margin as last year. This is the last chance for anyone to make up time so expect to see some impressive times.

This is definitely another sprinters’ stage. By this time we should know who has won the race overall but that doesn’t mean there won’t be any attacks. The pace will be super fast as the sprinters’ teams try to boss the peloton to set their man up GC teams will be ensuring their riders stay out of trouble. This stage was made for TV so also expect to see the lesser teams active as they try to get some riders away for their slice of TV time.