Well, he did it. We’ve heard plenty about what it’s like to attempt cycling’s Hour Record – it’s really rather hard – but what is like to spectate at The Hour? Is it actually a bit boring?

On Saturday May 2nd Alex Dowsett broke the UCI Hour Record. He rode 52.937km in Manchester’s velodrome. He broke the previous record held by Rohan Dennis by more than 400 metres.

But was is it actually a bit boring?

I must confess that before the event I did expect there to be some dull bits. The fifty minutes in the middle to be exact. Watching a solo rider go a couple of hundred times around a velodrome sounds like a hard thing to keep sustained attention to.

But it really wasn’t anything less than riveting for the whole hour. The whole two hours if you count the before build-up and the post-event chatting. 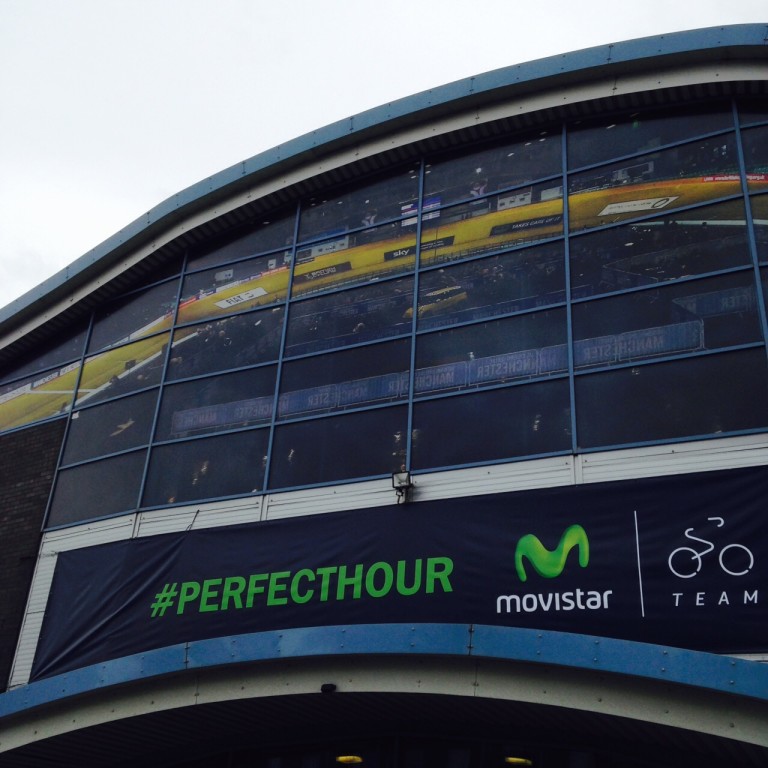 Walking from the busy car park to the velodrome felt a bit like going to a football match. Various small groups of people making their separate ways to the same destination. There were even some Movistar fans wearing  Movistar cycling tops in the mix too. There were also some Team Sky fans in their kit too (Team Sky = the Man United of cycling?)

I’ve been to the velodrome a few times and it never fails to feel exciting. There is something about the domed amphitheatre of velodromes that inherently makes them feel dramatic and special. It’s wasn’t a sell-out crowd by any means and I did wonder about what sort of atmosphere would – or could – be created.

The brief glimpses of a behind-the-scenes turbo-trainer-ing Alex Dowsett on the video screen worked well in prodding the spectators into a hum of chatter. The PA system was loud and clear and the commentators were doing a good job of explaining things and helping to boost the atmosphere nicely.

There were a couple of musical acts on too which I felt a bit sorry for. No-one was there to pay attention to singers. The organisers would have better off putting together some footage from old Hour Record attempts and showing them on the big screen. 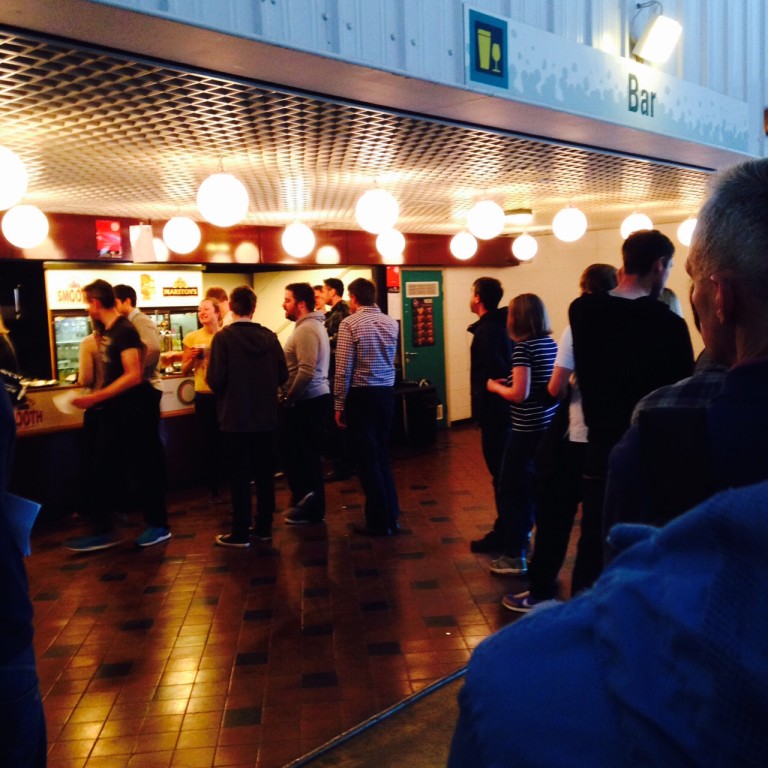 Once we’d found our seats and settled in it was time to hit the bar. Again, because I’d expected the actual race to be a bit of a drag in the middle to watch I thought it would be nice to chill out and sip a pint. It soon became clear as to the reason behind the empty seats; everyone was queueing for drinks too.

It wasn’t the fastest moving queue in the world but at least there were plenty of cool bikes hung up on the walls to gawp at and read about, like this Windcheater Monocoque contraption. The queue also gave invaluable time for checking on Twitter for any #PerfectHour news or info.

With about ten minutes until 1:00pm (the official race start time) Alex Dowsett appeared on the track. There was a huge eruption of cheering and applause. So huge in fact that it made my son briefly rather frightened (he’s only 2 and three quarters).

As the various paraphernalia of track racing appeared (weird helmet, bike-stand, lap counter etc) the excitement built up. Yes, this really was an attempt at The Hour. It was happening right in front of us.

Ironically, perhaps the best thing for building up the atmosphere was Alex’s request for total silence in the minute leading up to the off. There’s nothing better than hush for getting a crowd going. 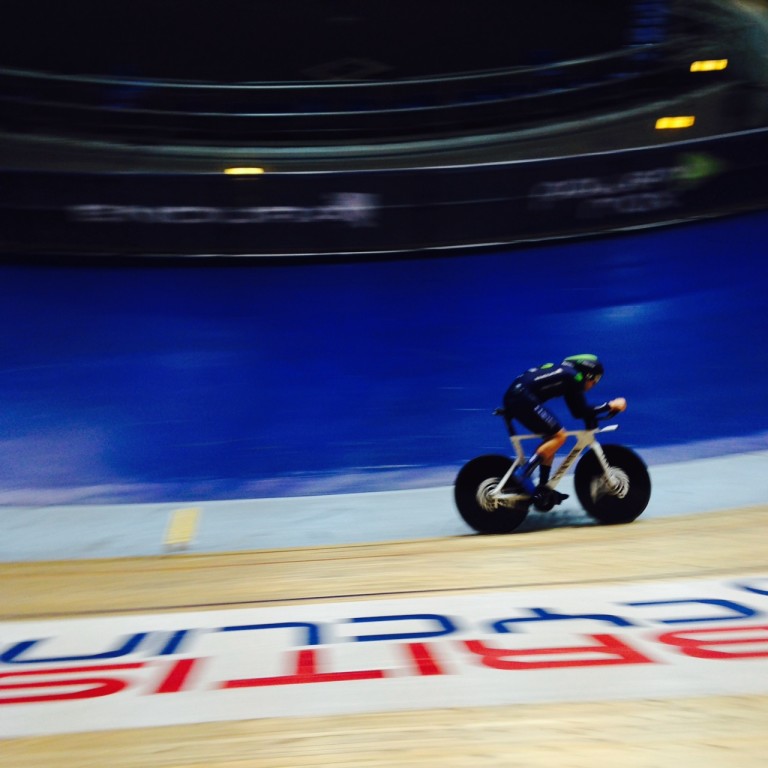 Then he was off! A massive cheer went up. And straight away the excitement was replaced with anxiety and worry. Alex was posting really slow lap times. Despite the commentators’ assurances that this was all part of the plan, it was hard not to be pessimistic. It was an emotional rollercoaster.

To continue the football spectating analogy, it was a bit like watching your team heading for full time with a 0-0 draw when they actually need to win to avoid relegation. Not boring but not exactly fun either. Just a bit nerve wracking. The crowd became noticeably more sedate. No one really ever actually uttered a discouraging word but the general vibe was one of doubt. Alex was getting so far off the required pace it just didn’t seem possible that he’d claw the time back. He’d made a mistake. It was all going to go wrong. What a shame. 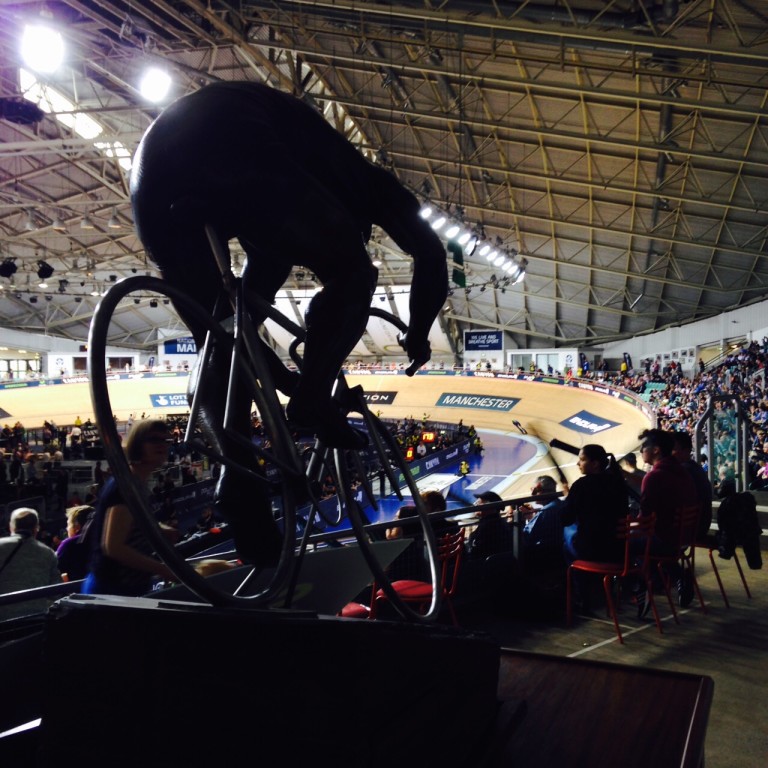 And then at around the 30 minute mark, Alex changed up gear. Not literally of course! At first there was guarded optimism and a few more cagey cries of “Go on Alex!”. After about 10 minutes or so of slightly faster split times, Alex ramped things up again. Properly this time. More noise from the crowd and a general sense of “actually, he might do this you know”.

For the final minutes of the hour it was clear that he was indeed going to break the record. Oh, the relief! Relief gave way and was replaced by cheery cheering. I took my son down to the rails at the edge of the track and he enjoyed waving and shouting “GO!” at Alex as he whizzed by. 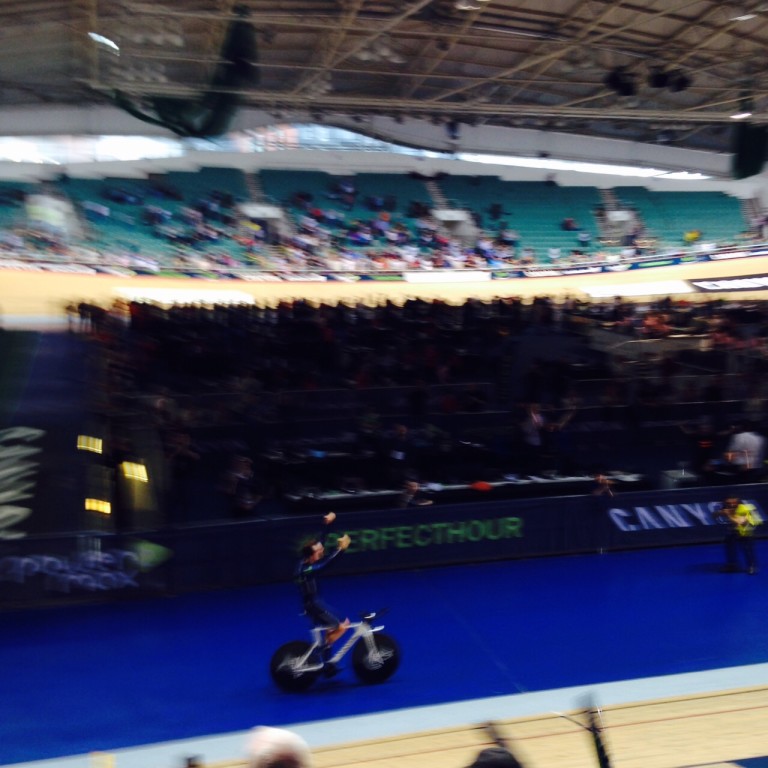 The final few minutes were extremely enjoyable. Though I couldn’t help but try to ruin them with thoughts of “what if his chain snaps?” Can you imagine that? Campagnolo didn’t let him down though (and how nice were his special custom-made Ghibli wheels??)

Then it was over. He’d done it. Nigh on 53km. Almost half a kilometre further than Rohan Dennis’ record.

Excuse the above blurry pic (maybe I can get away with describing it as artistic) but it was hard to keep a steady hand amidst the mayhem! 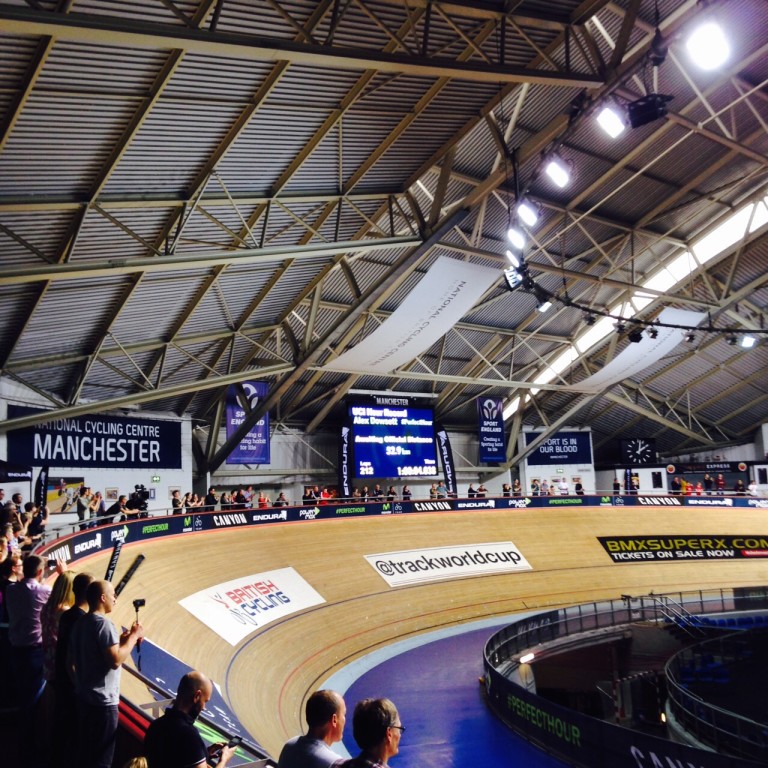 All in all it was an emotion-packed couple of hours. Personally I would have liked to have seen Alex look a bit more shattered at the end of his ride. A small vomit followed by a collapsing faint would have been nice. Maybe next time eh Alex?

Speaking of next time, it’s Sir Bradley Wiggins’ attempt on The Hour Record next. Lee Valley VeloPark on June 7th. Tickets have already sold out. I know that Alex will be watching though, somewhere.

This will not be the last time Mr Dowsett does The Hour.